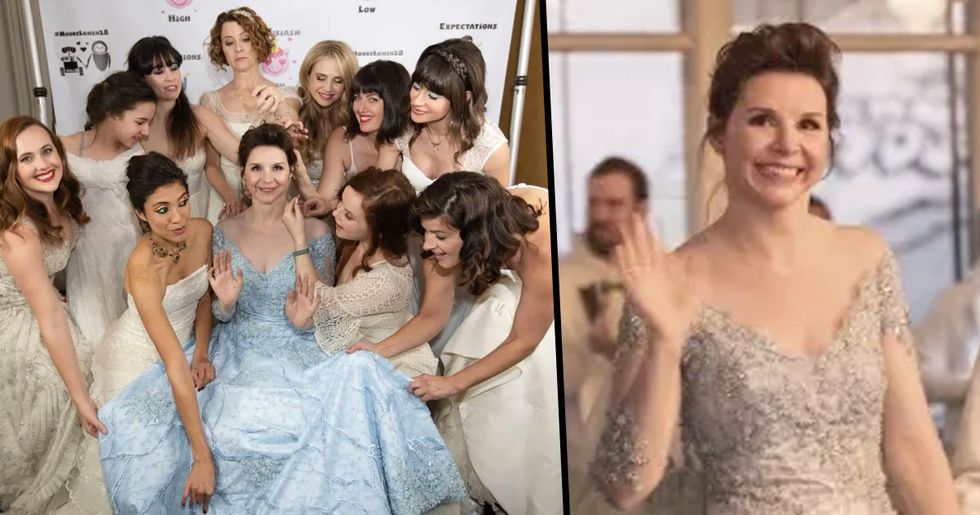 Brides often get a bad rep. When it comes to their big day, many women are seen as a "bridezilla" - an absolute perfectionist about every aspect of a wedding, and willing to fight with anything (or anyone) who gets in her way.

Usually, there's no more contentious issue for a bride than her dress. If there's one thing pretty much every bride is allowed to be a little bit crazy about, it's her attire. After all, a wedding is supposed to be the most special day of someone's life, and it's only natural you'd want a dress to reflect that.

Well, actress Audrey Moore had quite a different idea. Instead of wanting to keep all eyes on her, she went for a more offbeat dress code for her guests. She invited every single one of them to turn up also wearing their wedding dresses - and the photos are incredible.

A wedding is an incredibly special day in anyone's life.

Regardless of whether you totally agree with the social construct, it's hard to deny that there's something magical about declarations of eternal love between a couple.

But for brides, a wedding day is even more significant.

For many women it's one of the only days where all eyes are on them. It's also one of the few opportunities in a girl's life to actually dress like a real life princess.

This tends to mean one thing.

A bride's wedding dress is a hugely important part of the wedding overall. It needs to be absolutely perfect, to ensure maximum elegance and beauty.

Of course, this bride focus can have some adverse effects.

Many report becoming incredibly stressed in the lead up to their big day, under an abundance of pressure to have everything absolutely perfect.

In fact, being a bride can bring out the worst in some.

The combination of perfectionism, stress, intense focus and obsession can turn a normally quite lovely person into a living nightmare.

This cultural phenomenon is so prevalent that it has even been given a name.

The term "bridezilla" came about in the 1990s, and is still in common parlance today. In fact, there's even a We TV show all about the scary-demanding bride, creatively named Bridezillas.

Because the dress is such a focus of the wedding, it can be a point of major contention for a bride.

In fact, searching for the perfect gown can be an enormously stressful experience, with bridezillas-to-be fighting tooth and nail to find their favorite (and beat others to it).

Even those who are a little more chill about their big day still tend to want to look spectacular.

You're only (usually) a bride once, so it's worth making the most of it. Plus, how often do you get an opportunity to wear an enormous, multilayered white gown, complete with veil?

This is Audrey Moore. Unlike many brides, she decided she wanted to eschew tradition on her wedding day.

Moore is an American actress.

She's probably best known for her role in Netflix series Godless, where she played Sarah Doyle in 7 episodes.

Moore has also appeared in some other well-known shows.

She played Julie in 4 episodes of Better Call Saul in 2017. Moore has also been in CSI: Miami, Silicon Valley, Lucifer, and Castle Rock.

In January, Moore got married.

Her now-husband is writer Jesse Lumen. But Moore knew right from the off she didn't want a regular wedding.

Speaking to Buzzfeed, Moore said, "We really wanted our wedding to really represent ourselves, our sense of humor, our creativity, and also not just celebrate ourselves but marriage in general as a choice."

Moore had a few unconventional touches to her big day.

She chose an icy blue wedding gown which gave us definite Elsa-from-Frozen vibes. Her husband went for a tux-print hoodie, for maximum comfort.

The dress code for female guests was also wedding dresses. Whether they still had an old one, borrowed one from a relative, or even rented one, guests were required to wear as extravagant a gown as they could.

The post received a hugely positive response. Moore clearly loved it too, telling Buzzfeed, "I've been to all of their weddings and I saw them all in their beautiful dresses. I wanted them to have the opportunity to wear their really magical, beautiful dress a second time. It was like watching a group of princesses come to life."

Although some were concerned it would mean the bride forgoing her big moment.

It's true, being one bride in a crowd of dresses may make it harder to stand out. But it looks like Moore had planned ahead for this, as she explained on the thread.

Based on Moore's Instagram, the idea was a huge success.

Not only does every guest look particularly radiant and beautiful, but it appears the dress code added an element of fun and excitement to proceedings.

The wedding does look to have been great fun.

One Redditor said, "Your wedding looks like the most fun party ever!" Another added, "I've filmed/edited well over 100 weddings. This is the coolest, most unique one I've ever seen. Totally changed this jaded former wedding videographers' belief that weddings can be more than a money making industry."

The Imgur collection fully depicts just how fun this unusual wedding ceremony was. Here is the groom and his groomsmen in their matching tux-print hoodies. Because, as Lumen says, "honestly, who wants to wear a tux?"

Later in the night, he went for an even less conventional look.

Lumen traded his hoodie for a classic "alien carrying a human" suit. Moore spruced up her already stunning dress, giving us a full Elsa-from-Frozen costume.

Even the bar had a fun twist.

Lumen said "We love movies and TV, so we set up a theater concessions 'sugar bar' for our guests and played movie soundtracks and theme songs for our reception."

"We had skee ball and arcade games for our guests young and old!" Lumen shared.

There was even a costume element for the guests, too.

"Once the ceremony was done, the whole wedding party put on costumes to join many of our guests who were already in costume!" Lumen shared. "Some choice costumes included Duff Man, Spider-Pig, a mermaid, Spock, a burrito, and Max from Where the Wild Things Are just to name a few."

It's clear Moore had a similar sense of humor about the big day.

She shared this bridal twist on the 10-year challenge on her Instagram. We have to say, even though this pic was intended as a joke, Moore does look absolutely incredible - then and now.

The fun didn't just start at the reception, either.

Moore and Lumen's wedding was reported officiated in a Mad Libs style, with suggestions from the congregation.

News of the wedding has spread across the internet.

One Facebook commenter joked, "You assume I could fit in it.. rude." Another shared, "A friend of mine and her husband have been friends since high school with 6 other married couples. Every year they have an anniversary party where they wear their wedding clothes. They have done this for 20 years and the pictures are hilarious!"

When we think about it, it does seem a shame to waste a wedding dress only wearing it once.

Props to Moore for thinking of an innovative way to help brides get their wear out of these expensive (and beautiful) gowns.

One even suggested the idea could make for a really great plot for a rom-com. We know we'd be watching!

Going off the beaten track and doing things your own way is a really inspiring wedding mantra. There's only one problem - where was our invitation?