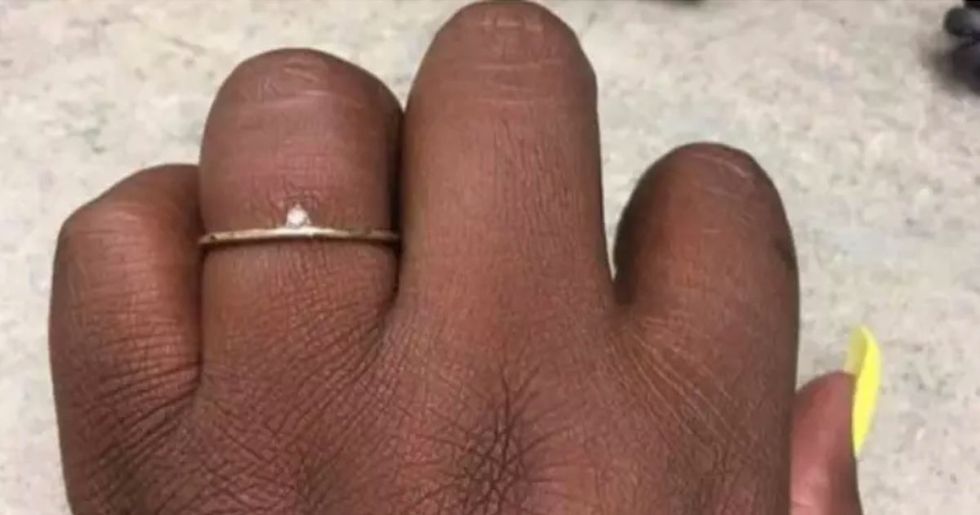 There's something about love. The emotional fanfare of finding someone perfect is aspirational, and, in spite of many comments to the contrary, plenty of us still seek out marriage as a confirmation of that commitment. And nowhere is this more highly scrutinized than in the wedding planning process - which starts with the ring.

For some, the engagement ring is one of the most important aspects of the marriage process, with certain people applying emotional significance to the diamond size in particular. To these people, a lackluster ring is symptomatic of a lackluster approach to the relationship overall.

One bride-to-be has taken to Reddit to mock the tiny diamond engagement ring that her fiancé bought for her and it has taken the internet by storm. Keep scrolling to see what, exactly, she said about the ring and how the internet has reacted to her pretty cruel jibe.

Dating is no joke...

There's one area in particular that this manifests.

In the physical symbol of the commitment itself - the engagement ring. For many, the ring is almost the most important aspect of an engagement.

And there's usually an even more specific concern.

Engagement rings typically have at least one large jewel - traditionally a diamond. For many, it's the size of this gem that makes all the difference.

And obviously, the jewel represents something else.

Diamonds cost a pretty penny - so a ring with a real big one is a not-so-subtle way to brag about wealth.

A huge ring is a spectacle.

And when someone feels so excited about their relationship, it can seem like a huge engagement ring is the only adequate way to express it.

It can also be a way to set the tone.

An amazing ring will surely lead to an amazing wedding, and thus an amazing marriage ... right?

But what if you choose to go down a different path?

What if you're more in the mindset that material representations of your love don't actually mean anything at all...?

An anonymous woman on Reddit shared her engagement ring along with her dissatisfaction...

She posted: "We been togetha for 8 years and talking bout getting married for almost 3. Dis da ring he said he saved up to buy me. Am I being shady or materialistic if I tell dis mf ion want dis little a** ring?"

As you can see, the ring itself is tiny...

The slim gold ring with a tiny diamond (that somehow looks slightly off...) racked up nearly 200 comments on Reddit and quickly went viral.

Many agreed with the bride-to-be's dismay over the ring, with one user writing: "I’m not materialistic when it comes to things like this but if my man proposed with THAT I would be full-on insulted."

Many believe that this is a case of poor communication...

"If she's unhappy with it, she has every right to tell him. I don't think being unhappy with her ring makes her ungrateful or anything. She should have communicated her expectations more clearly," another user wrote.

The issue of finances was brought up...

"I wouldn’t accept the ring because it’s not what I picked out. He could’ve gotten a cheap ring that looked way better than this if he looked for it. But if that’s all he can save it’s time to have a conversation about finances because the wedding is gonna be an issue," another user wrote, suggesting that the quality of the ring was a reflection of the couples' finances.

Of course, there were many users thinking that the woman was being unfair towards her fiancé...

"I'm a custom jeweler. I specialize in wedding and engagement rings. Please don't marry the guy who gave you this ring," a user wrote. "Don't marry this guy because if the size, shape color or style of a ring is more important to you than your future husband's feelings, what your idiot friends think, what complete strangers think or his ability to buy a big flashy rock? You're going to make a s***** wife."

The woman's harsh remarks concerning her fiancé's gesture have certainly ruffled some feathers...

Another user added: "My personal opinion is that the ring isn't as important as the one giving it to you."

It's important to realize what's truly important in a relationship...

"F*** the ring - either you want the man, or you throw the whole man away and start over. It just depends on your values and if a ring is important to you," another wrote, truly highlighting the perspectives of being in a committed relationship.

Some users really didn't hold back...

"I told my husband that this is the sort of ring I wanted and he got me an elaborate beautiful ring instead. It’s all about not being a c***," someone even wrote.

We all have our own tastes and opinions, at the end of the day...

And communication is one of the most important things in a relationship. This woman clearly didn't communicate to her fiancé what she wanted out of the engagement ring and, instead, has bashed him online for his "cheap" and "distasteful" style in engagement rings. Getting engaged is all about love and commitment, and if this woman wants nothing but an expensive and lavish diamond ring, she needs to be looking elsewhere... Another woman recently went viral after she shared a picture of her engagement ring - but not for any of the reasons that you might think. Keep scrolling to see what distracted the internet so much that they didn't even notice the ring on her finger.