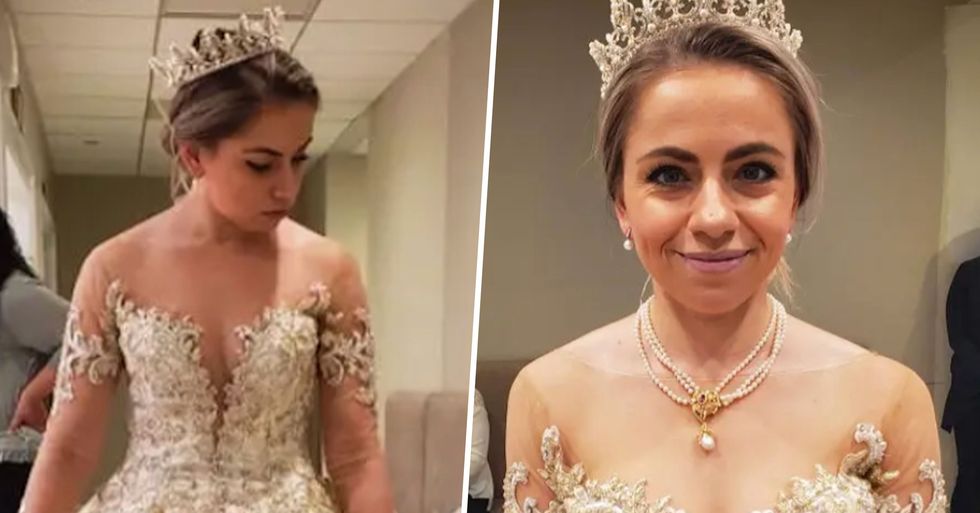 We all know that one of the most important parts of getting hitched is picking the perfect wedding dress. But it doesn't always go smoothly...as was proven when one bride went shopping and tried on 9 dresses before finding the one.

And there's way more to the gown she picked than meets the eye - especially since it draws inspiration from one very famous TV show...

Janal Montagna and Aaron Kurincak met almost fifteen years ago at the University of Miami.

The pair lived across the hall from each other in their freshman dorm, and Janal caught Aaron's eye straight away.

But it wasn't until they ended up working at the same place that they connected.

The duo were both working at Abercrombie when Aaron asked Janal to dinner.

And they've been together ever since.

Aaron joined the military as an officer, meaning the pair had to go long distance for a few years.

Aaron proposed at a rooftop bar in New York 10 years after they started dating.

It looked to be a truly stunning setup. And, shortly after putting a ring on it, the couple moved to Charlotte, North Carolina, together, where they live today.

Now, let's be honest, we all love a good wedding.

If nothing else it's a good excuse for a good old party.

Should you go with a traditional church wedding? A regal castle? Or play it safe with a registry office and an intimate restaurant? Or maybe jet off abroad? Decisions, decisions.

And of course, all the free tasting sessions that go with this laboring task. We're not complaining!

And the wedding cake.

The all-important question: DJ or band?

A DJ is more versatile but a band is oh so cool.

You've got to get it right.

But, the most important element of any wedding?

The bride's wedding dress. The dress that should make every woman feel like a princess.

So, when it came to the planning of Janal and Aaron's big day...

The pair had a lot to think about. Just wait until you see the wedding photos...

Early on, the couple decided they wanted to jet off somewhere to get hitched.

They eventually settled on Croatia, for its stunning views of course, but also for a very different reason...

Their favorite show, Game of Thrones, was filmed there.

And, in keeping with the theme, Janal wanted her wedding dress to radiate all things Game of Thrones.

"I wanted something dramatic," she told Insider.

So, she decided to go shopping for a wedding dress in earnest after the couple settled on Croatia as the destination.

Janal was buying her own dress, so set her budget at $5,000, including alterations.

And she tried on 9 before finding her dream gown. Just wait until you see it...

Janal wasn't in love with the look of the first dress she tried on.

"This was a really stunning dress," she said. "That back and train is a showstopper. It kind of felt Old Hollywood and gave me a really great shape for my body, which is more petite." "But I knew it just didn't hit the mark."

"This is such a timeless, romantic dress," she said, adding that she didn't feel it matched her style of wedding.

Janal liked the feel of this gown...

But didn't feel like it was dramatic enough. "This one was more along the lines of what I was looking for as far as the detailing and design of the beading," she said. "I loved the cap sleeves and the illusion neckline." However, she said she "wasn't a huge fan of the silver-colored detailing, and the bottom left a bit to be desired."

This tulle ball gown was another beautiful dress but it just didn't hit the mark.

"I loved the bottom and the top on this one," she said. "It had more of a ball-gown feel I knew I was starting to lean toward. But it was too whimsical for the look I was going for."

Janal did like the gold detailing on this trumpet gown...

But again, it just wasn't the one.  "This one was really unique, and I loved the ombré look with the gold detailing at the top giving away to the white," she explained. "The beadwork on the train was also beautiful." "But it was just a little too simple for me," she added. "I wanted a more 'wow' moment."

This dress made Janal feel beautiful but didn't fit her venue.

"This one was definitely a contender," she said. "It made me feel like a Greek goddess. "I felt like it would have been a great dress if we were married in Greece, but not quite a fit for the old-world vibe I was going for in Croatia," she added.

The classic shape of this gown was a win, but it was too simple. "I think this dress was the dress that everyone thought I would be in: form-fitting, and a low back with a long train," she revealed. "I liked this lace one much better than the first lace dress I had tried on. "I could have easily dressed this one up with accessories and the veil, but it just wasn't it."

The flowing sleeves attracted Janal to this gown... making it the official runner up.

"This dress was the runner-up," she said. "It was giving me a bit of the European queen vibes I was looking for, and it was unique enough to be something that not everyone has seen before. "The sleeves alone almost sold me, but I still wanted to tweak some things on the dress if I had decided on this one."

On her ninth try-on, she found the dress of her dreams.

After seeing it on the rack...

Given how heavy and intricate the design was, she assumed it was way out of her budget.

And it gets even better...

The dress also turned out to be less expensive than she thought it would be, as Kleinfeld Bridal has a military discount. As a result of her fiance's service, the dress went from $5,900 to $5,200.

The gown was only at the store for the weekend because of a trunk show.

"It caught my eye because of the sleeves and the color," she said. "As soon as I touched it on the rack, I had a good idea it was the one. It was so heavy, and the beading and detailing were exquisite in person."

"It was everything I didn't even know I wanted and needed in the most important dress I would wear."

"The royal feeling, the floral work, the beading, the ball-gown silhouette, the sleeves, and that gold color just made me think Croatia."

She also didn't have to alter it much at all.

Making it the near-perfect dress.

With the added layers, the dress weighed a whopping thirty-five pounds.

So, Janal decided to purchase a separate dress for her reception that was easier to move in.

She chose a backless L'amour by Calla Blanche gown.

"I wanted something unique for the reception, but more form-fitting and sexy that was a different look from my first dress and that I could bustle and dance in," she explained.

Janal wore a long veil to the ceremony.

Despite costing $1000, her mother-in-law ended up buying it for her as a wedding gift, allowing her to have the look she always wanted. "That was super sweet of her to step in and get me the dream veil that went with the dream dress."

Janal also donned a crown with the dress on the big day to make it even more dramatic.

The outcome was absolutely stunning

Congratulations, Janal, and Aaron! If this article has put you in the mood to look at wedding dresses, scroll on to see the latest collection of Disney inspired wedding gowns...