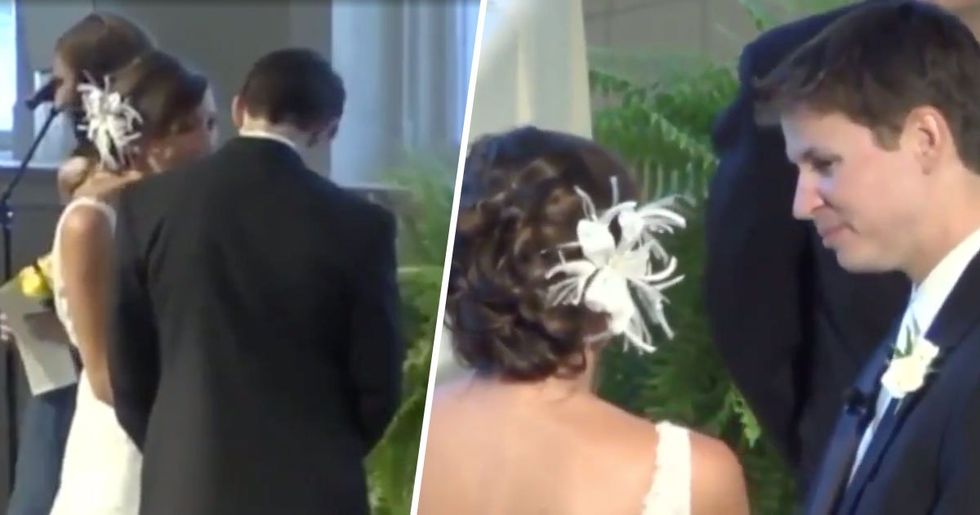 Many brides-to-be dream about their big day for their whole lives. Which is what can make the situation all the more traumatic if something goes wrong. Such is the story of one hapless bride which surfaced on Twitter this week.

After her nervous walk down the aisle, she was happily reunited with her hubby to be. But, after the time they had spent apart, she was eager to update him on all of her movements - and we mean all of them. Hilariously, her cringy admission was caught on her groom's mic and even made it into their wedding video. Hey, they say honesty is the cornerstone of any relationship.

For many, their wedding day is the most important day of their life.

In fact, some even start planning their big day in childhood - way, way before they've even met the person who they're planning to commit to for life.

When it comes to being obsessive over their big day, it's always brides who seem to go that little bit more obsessively crazy.

Because weddings are stressful!

And trying to make sure that everything goes according to plan, in order to live up to that long-held dream, would be enough to drive anyone a little bit mad.

And it's important to remember that no one's wedding day ever goes off totally perfectly and without hitch.

Which led to a pretty funny Twitter thread this week.

In the interests of making people feel less alone in their matrimonial disasters, people began sharing the worst things that happened to them on their wedding day - with hilarious results.

The thread was started by Jimmy Fallon.

It’s Hashtags time! Tag a tweet with #WeddingFail and then tell us a funny or weird story from a wedding you were at. Could be on the show!
— jimmy fallon (@jimmy fallon)1560868823.0

In search of content for his show, he took to Twitter to ask people to reply with their biggest wedding day fails - and the replies did not disappoint.

Take this one, for example.

Less hilarious, and more of a genuine day-ruiner - we're glad this wasn't us.

@jimmyfallon My Sister in law was the maid of Honor at our wedding. She was so nervous, during the ceremony she fel… https://t.co/E9CsQgeu4c
— Chris Detje (@Chris Detje)1560871357.0

Ok, we hate to say it, but this actually sounds pretty funny. Still awaiting that video, though!

@jimmyfallon I thought I was making a calm, composed face as my wife came down the aisle. I found out this was the… https://t.co/r2meSCuA5T
— Patrick Neville (@Patrick Neville)1560884325.0

It's always a little bit horrifying to see our faces when we aren't pulling our "mirror expressions." But this one probably takes the biscuit.

And this is just unspeakable.

If you want something done right, when it comes to your special day, it might be better to do it yourself.

But there's one standout story from the thread.

And it's got the whole internet laughing, as one unsuspecting bride very nearly ruins her big day forever.

One Twitter user shared a video of their fail.

And it's a real humdinger. It starts with a pretty normal (albeit very beautiful) wedding scene.

The pair are happy to see one another.

The usual niceties begin and a nervous but excited couple stand at the altar.

But things shortly take a turn for the worse - and the hilarious.

Because the bride then makes this admission.

We're all for sharing everything with your spouse - but do you really need to share everything?

And the groom quickly reacts.

Not only is that not something that he particularly wanted to hear - but he also realizes something horrifying.

The groom is microphoned up for the wedding video - right in the area that his bride whispered her not-so-sweet secret.

Luckily, the groom saw the funny side.

"I married a pretty awesome lady. There isn't much worse she could have said, is there? It's funny every time," he tweeted to Fallon.

And others have found the story oddly heartwarming.

Sure, it's not the typical romantic story - but it does show just how in-tune, down-to-earth, and well-matched this couple is.

We have to say, we found it oddly cute, too. And for an even less appealing wedding-based disaster, keep on scrolling.