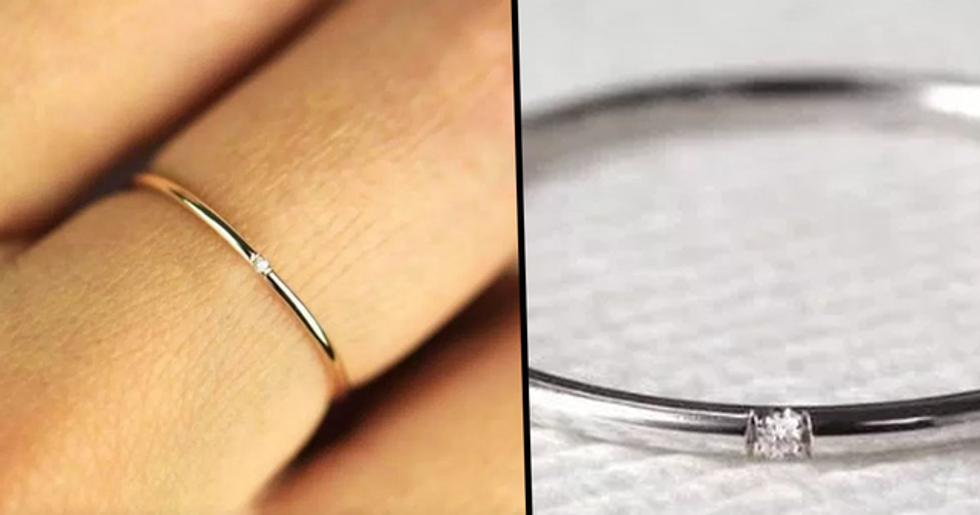 There's something about love. The emotional fanfare of finding someone perfect is aspirational, and in spite of many comments to the contrary, plenty of us still seek out marriage as a confirmation of that commitment. And nowhere is this more highly scrutinized than in the wedding planning process - which starts with the ring.

For some, the engagement ring is one of the most important aspects of the marriage process, with certain people applying emotional significance to the diamond size in particular. To these people, a lackluster ring is symptomatic of a lackluster approach to the relationship overall.

Well, one woman, in particular, discovered that, for some, a ring is actually more important than other people's feelings. She went for a more minimal take on the classic diamond - but when she shared online, the response was absolutely brutal. Want to see what people were saying? Read on for all the cruellest roasts.

There's one area in particular that this manifests.

In the physical symbol of the commitment itself - the engagement ring. For many, the ring is almost the most important aspect of an engagement.

And there's usually an even more specific concern.

Engagement rings typically have at least one large jewel - traditionally a diamond. For many, it's the size of this gem that makes all the difference.

And obviously, the jewel represents something else.

Diamonds cost a pretty penny - so a ring with a real big one is a not-so-subtle way to brag about wealth.

A huge ring is a spectacle.

And when someone feels so excited about their relationship, it can seem like a huge engagement ring is the only adequate way to express it.

It can also be a way to set the tone.

An amazing ring will surely lead to an amazing wedding, and thus an amazing marriage ... right?

But what if you choose to go down a different path?

What if you're more of the mindset that material representations of your love don't actually mean anything at all. What if you go for an altogether more subtle ring choice?

For some, this is a truly bizarre stance.

As one woman discovered to her detriment, after showing off her understated choice of engagement ring this week.

She had chosen to go for a smaller design.

The ring is question was from Etsy store, JVS Concepts, which specializes in minimal, simple jewelry designs.

The shop sells a range of engagement rings.

But the designs on offer are a far cry from the typical, overstated sparkles that normally qualify an engagement ring.

And one ring in particular is super subtle.

The design, called the Minimalist Wedding Band, was the item that spawned the tirade of mocking comments on Facebook.

One woman shared that she'd gone for the simple design on a wedding planning Facebook page.

But the responses were pretty far from what she'd hoped - in fact, they were brutal! One commenter wrote, "Why even bother having a diamond there?"

Others had a different (but similarly negative) reaction.

They had a (slightly sarcastic) sympathy for the bride to be. One wrote, "It's so pitiful, I just can’t. It's too sad."

Some made mocking jokes about the jewel's diminutive size.

"I have assembled my colleagues of world class physicists and astronomers, we are building new instrumentation so we can see your f****** ring," one Facebook user joked.

Some made some very unkind comparisons.

"Take that keyring off your finger and show us the ring," wrote one. Another offered, "You've got a smidge of tinfoil on your band."

And that wasn't the end of the cruel comparisons.

Some had another theory.

They thought that there might be another reason for the ring's subtle appearance, writing, “I guess neither of you want anyone to know you’re engaged huh."

Some, though, had a different view.

After seeing the mockery that the woman was receiving, some decided that they should stand up for her - and the ring, too.

Some thought that the comments were super shallow.

One wrote, "I think people are so in love with weddings and big diamonds they forget what marriage really is."

Others commented that the ring was stunning - if a little understated.

"It's beautiful and feminine. When I was shopping for an engagement ring, this would definitely have been on the short list. My wife prefers minimalist, "cute", and petite jewlery. It's not about big and flashy. It's about meaningful sentiments. An engagement ring should be a symbol of your love, not a show of wealth," wrote one.

After all, size shouldn't matter.

"I think it's beautiful. Love shouldn't be measured by the size of the diamond her hand," offered another in support of the ring.

Because at the end of the day, that really isn't what marriage is about.

If you're basing a relationship around one piece of jewelry, it's likely that you're going to end up doomed to fail. We wish the happy couple a lifetime of (understated) happiness!