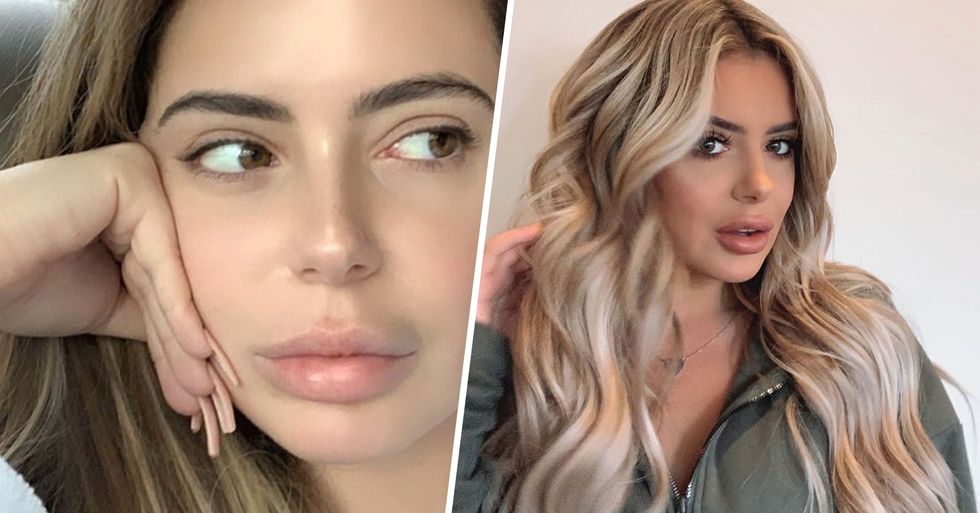 Since Kylie Jenner started getting lip fillers in 2014, it became a global trend and everyone wanted fuller and more luscious lips.

The fuller pout is still very much a trend, but many are now opting for a more natural look.

Brielle Biermann is one of those people, and after dissolving her lip filler, she is embracing her younger and more natural self.

Lip fillers have been a trend for a long time now...

It seems that everyone wants a plumper pout. A thinner lip is simply just not acceptable.

And who was it who started this trend?

The youngest billionaire in the world, Kylie Jenner, of course!

Kylie started getting lip fillers at a very young age...

She was only sixteen-years-old when she welcomed her signature pout, but let's face it, if you're in one of the world's wealthiest families, you can pretty much do what you want.

Her impossibly perfect lips triggered something in girls all around the world...

And it created an unhealthy obsession with achieving an appearance that was extremely unrealistic and generally, it was terrible for the self-esteems of girls and young women.

And hello everything plastic and silicon!

The world became obsessed with having plump lips...

And this even triggered a dangerous online trend between young girls called the "Kylie Jenner Challenge" - teenagers would use a plastic cup or a shot glass and use it to suction their lips, causing them to swell which would result in pain and damage to their natural lips.

It's terribly sad that a lot of young people feel they need to look a certain way to be beautiful...

When something ridiculous like lip fillers isn't the way forward, at all.

In recent years, people have begun to embrace their natural beauty...

And Kylie herself even had her lip fillers slightly dissolved at one point. Well, she got them topped up again very shortly afterward, but still!

Kylie isn't the only one to take on board the au naturel trend...

Brielle is The Real Housewives of Atlanta's Kim Zolciak's daughter...

And the twenty-two-year-old has made quite a name for herself after TV appearances with her mom by becoming an online personality and a social media influencer.

Brielle has always been honest with her fans...

And she openly talks about how she regularly gets lip fillers to maintain her perfect pout.

Despite receiving criticisms, she has always stood up for herself...

Back in 2018, she received a lot of negative comments about her lips in an Instagram post from Khloe Kardashian's baby shower.

Despite the hateful comments...

Brielle clapped back saying, "My lips do not look good in photos. I f****** get it. I'm really over y'all saying this as if I've never seen/heard it... I'm not changing them, whether it looks good to you or not."

But it seems that recently, Brielle has had a change of heart.

She took to Instagram yesterday to announce to her followers that she has made the decision to have her lip fillers dissolved.

She posted a bare-faced selfie to her Instagram story...

"Dissolved my lips yesterday... gonna look like eighteen-year-old Brielle again soon," she wrote, along with, "2020 new year new me!" and "Black and blue for a few days."

She then shared a throwback selfie...

Which we all love to see, by the way.

She posted another throwback...

And merely captioned it with a "face in hand" emoji. We feel you, Brielle.

Last year, Brielle revealed how her natural lips made her feel insecure...

"All my friends had beautiful, full lips," she said. "Like my best friend Elizabeth. I was like, you b****, I want lips that look like yours… Since I was fourteen I was like, I have to have my lips done right when I turn eighteen. If I could've done it sooner I would've and I don't regret it. I don't think I've gone overboard like people claim."

Her mom has always defended her daughter's choices to have lip fillers...

via: Watch What Happens Live

"I've heard her complain about her lips since she came out of the womb, honestly," Kim told Andy Cohen on a 2016 episode of Watch What Happens Live. "I was like, 'I'm going to take you to the best.'"

Whatever makes a person happy!

But sadly, there will always be trolls out there. Keep scrolling to learn about the time when Khloe Kardashian deactivated her Instagram account after trolls accused her of getting lip fillers...