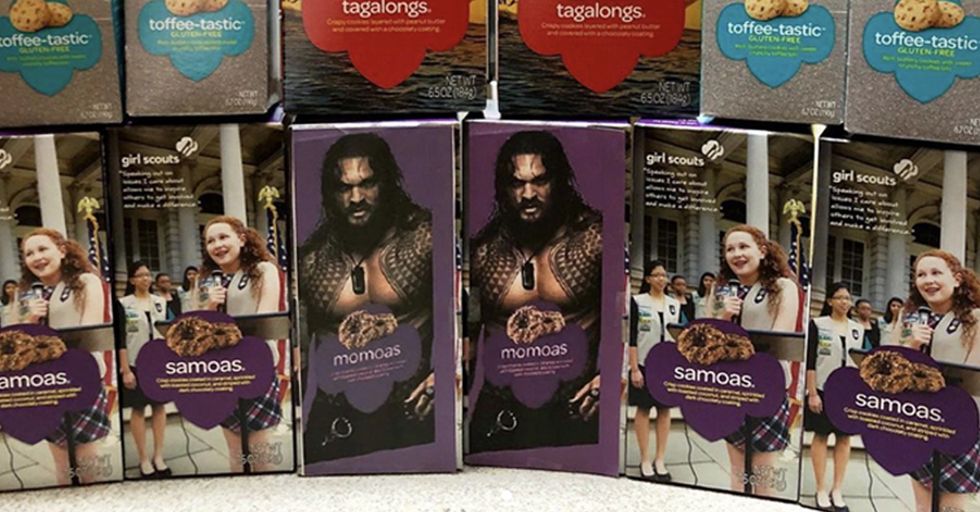 For some, it's the most wonderful time of year. For others? It's that time of year when going into the grocery store is like entering into battle. You hear them before you see them...

You can't make eye contact or you're doomed. Before you know it, you're shoveling over $20 for cookies that you'll eat in one sitting. And Girl Scouts are evolving, y'all. You used to feel safe if you didn't have cash on you - there's no way you could be lured into buying boxes and boxes of those cookie perfections. But now? Now, Girl Scouts use Venmo and take cards! They'll stop at nothing to get us to turn into gluttonous monsters who devour Thin Mints like it's what we were put on this earth to do.

Girl Scouts know exactly what they're doing. They're master marketers, and they know how to get you to fall into their clutches. One Girl Scout took selling cookies to the next level, and turned "Samoa" cookies into Jason "Momoas."

This is Jason Momoa.

You may know him from Game of Thrones as the fierce Khal Drogo. You do not want to mess with Khal Drogo.

Or perhaps you're familiar with his role as Aquaman in the DC Extended Universe.

He appeared in Batman v Superman: Dawn of Justice, Justice League and his own film, Aquaman.  Basically, Momoa pretty much only plays the coolest characters.

Like, hello. The man is talented and stunning. IT'S NOT FAIR.

It's no surprise that the 39-year-old actor began his career as a model.

He even won Hawaii's "Model of the Year" award in 1999. It was much deserved. (Obviously.)

Momoa has been with actress Lisa Bonet since 2005. They married in October 2017, and have two children together. He's also stepfather to Bonet's daughter, Zoë Kravitz.

He killed it when he hosted Saturday Night Live. Hey, Jason Momoa? Can you bring it down a notch? You're making the rest of us look bad.

Well, one young Girl Scout decided on a new way to market her cookies.

Charlotte Holmberg, a "Top Cookie CEO" for Girl Scout, came up with a new cookie...the "Momoas."

That is Jason Momoa on a box of caramel-coconut Samoas, thus creating the "Momoa" cookie.

9News reported that Charlotte's mom actually works in marketing. Charlotte and her mom printed out a bunch of pictures of Momoa and glued them onto the cookie boxes.

"The moms are getting really excited and they're saying that they need them," Charlotte told 9News.

Just imagine walking up to a Girl Scout cookie table and seeing this instead of Samoas. It'd be quite the surprise, right?

Who would ever eat plain old Samoas again?

It seems like Charlotte has a bright future ahead of her in marketing if she decides to go that path. The girl is innovative!

People are dying for Momoas.

Usually, Thin Mints are the most talked-about cookie (have you ever tried them frozen? Do it. Now.) but something tells us these Momoas are going to blow the other cookies out of the water.

It's just too perfect of a match.

I just read about a Girl Scout putting pictures of Jason Momoa on boxes of Samoa cookies and calling them Momoas an… https://t.co/HtQRf0fepb
— attk (@attk)1550619370.0

How do we all rally and get Girl Scouts to change Samoas to Momoas permanently? Because we should all definitely do that. With Jason Momoa's permission, of course.

She may be young, but Charlotte is out there hustling.

She's not only taking the Girl Scout cookie industry by storm, but she's taking over the internet with her invention as well.

People have been making the connection between Jason Momoa and Samoas for awhile.

The internet is THIRSTY for some Momoas.

Hey! Girl Scout corporation! Are you listening? Give the people what they want!

It feels like they're a real thing, even though they totally aren't.

It doesn't seem as if Jason Momoa has commented on the cookie venture yet, but we're all anxiously waiting to see his response.

What would you do if you saw yourself on a box of Girl Scout cookies?

It would definitely be pretty wild, huh?

Though, not everybody is thrilled about it. "Expect a letter from Warner Bros. ?," one user commented on Facebook. The Girl Scouts of Colorado Facebook page made sure to update everyone about the situation.

"Thanks to everyone who reached out, asking to support this Colorado Girl Scout!" they wrote.

"This all started as an inside joke with her friends and family. She has sold her supply of 35 boxes or so, and is no longer using the image to sell cookies – though her cookie season is ongoing," the statement continued.

The anger seems to stem from the fact that the young girl was using someone's image (without their permission) to sell cookies.

"So [who's] running Jason that check for using his image???" another Facebook user commented.

People had real questions about the boxes.

"Is it legal to use someone else's image and sell it?" a Facebook user commented.

"While her heart was in the right place it is never cool to just lift an image off the internet and 'use' it. Ever. If she wants to be a business woman she needs to follow the correct legal procedures," another Facebook user commented.

The actor hasn't reacted or released a statement yet himself.

And since Charlotte stopped using the pic to sell cookies, the issue may go away. But people will not stop talking about it, that's for sure. Despite the heated comments on the Facebook post, most seem to view Charlotte's idea as a funny, harmless one.

We wonder how Jason Momoa would feel about being a new Girl Scout cookie?

Do you think he'd be super into it?

It kind of feels like we're in a Willy Wonka universe.

Are the Girl Scout cookie boxes with Jason Momoa on the box the equivalent to a Golden Ticket? Sure feels like it.

Despite the blowback, Charlotte's idea is still getting a lot of love on the internet.

And it probably didn't hurt her sales, either. Share this with your most cookie-obsessed friend!