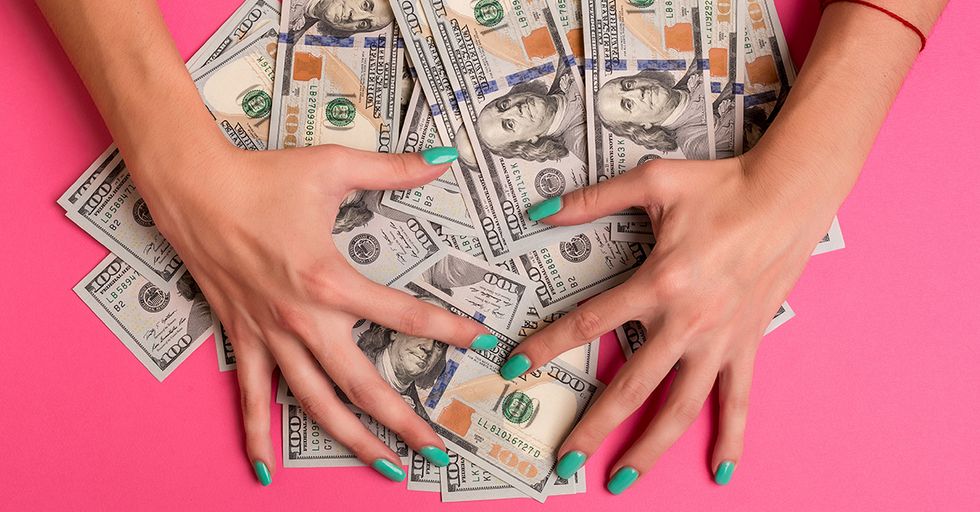 Did you know that most Americans don't have enough money saved to cover a $1,000 emergency? That's not good.

From health issues to car issues to plain old unexpected bills, $1,000 emergencies are not that infrequent! And the peace of mind provided by an emergency fund cannot be overstated.

So yeah, you should probably be saving money. You don't need me to tell you that.

But how do you actually do it?

Great question. I'm glad you asked. And, I have an answer for you! Actually, I have 19 tricks, at least one of which is pretty much guaranteed to work for you. So. Ready for those dollar bills to start stacking up? Then read on, friend.

1. First of all, you need to realize how saving can really add up.

I know this probably seems trivial, but in order to really motivate yourself to save money, you should probably fully realize exactly how powerful the act of saving money can be. This simple diagram shows that even a very little bit amount of money counts. It can be easy to trick yourself into thinking that you don't have enough money to set aside in a savings account, but most likely, that's simply not the case. You can do this.

2. Do a penny challenge.

3. Save dollars instead of pennies.

This plan has you starting out with two bucks and adding two more every week. Keep in mind, though — $104 on week 52 might not seem like too much, but the last four weeks are going to "cost" you $404 total. If that doesn't strike you as being undoable, great! If you think you could swing even more, then try this next one:

This plan makes it so you can save $10,000 over the course of one year. Obviously, it's pretty intense and may not be for everyone. If it's not for you, don't freak out! We still have 15 more money-saving tips for you to consider. Like this next one that will help out with holiday gifts...

I personally think this idea is pretty brilliant. You can easily get Amazon gift cards from the grocery store (or online). Then, just set those cards aside until you're ready to do your holiday shopping. If you can swing an extra $25/month for the gift cards, you'll have $300 come December.

You might be thinking that tracking your savings is just a way to keep track of how much you have, but it's so much more than that! The act of actually writing it down (or representing it with stickers, as seen here) will actually motivate you to keep saving. I recommend using pens or markers to track it instead of pencil so you're not tempted to spend your savings and erase your progress.

In the same way that physically tracking your savings motivates you to save more, physically tracking where you're spending money will make you want to spend less. There's something about writing "$6 for coffee" that makes you mentally reprioritize where your hard-earned money is going. (Psst! If you like the trackers you see above, here's an article we wrote with more fun trackers for your journal!)

8. Keep making payments — even after you're paid up.

This same tip can apply to anything you're paying off. People tend to spend whatever they don't owe someone else. If you trick your brain into thinking you owe that money, you won't spend it on something else.

9. Use the envelope method.

If you've spent much time researching money-saving tips, you've probably come across this method before. The idea is to take cash out from the bank and split it into envelopes that are labeled for specific uses. We all know how easy it is to swipe your card to spend money, but the act of paying cash really makes it hit home when that money is being used — and when it's gone. And while you're dealing with cash, here's something else to try...

Whenever you get a five-dollar bill, put it into a shoebox. Don't spend it. If you're using primarily cash for your everyday expenses, it'll start to add up very quickly. Five dollars seems to be the perfect amount of money where you don't really miss it when it's gone, but it adds up in no time.

This is going to look a little different for every person who tries it. Obviously, you need to pay your bills and you probably need to buy food to eat, but do you think you can resist spending money on unnecessary items for an entire month? Give it a try! It's just 30 days! (I recommend writing down every item that you find yourself wanting to buy throughout the month. At the end of the 30 days, revisit your list. You'll probably be surprised by some of the things on there and realize you don't actually want them at all.)

12. Pay off debt with the Snowball Method.

13. Or use the Debt Avalanche instead.

This is the same idea as the snowball, except you start with the debt that has the highest interest rate rather than the lowest balance. It will take longer to pay off the first debt, but once you do, the effect will be sweeping. Kinda like an avalanche. Get it?

Hey, change is money! I know it's annoying, but if you're really serious about saving, then there's nothing silly about saving the change you find in your laundry, couch cushions, or even the pennies you see in the street. When it comes time to cash in, either roll it and take it to a bank, or use a Coinstar machine — but if you do the latter, don't get the cash voucher (unless you need that money immediately). Instead, opt for a gift card. That way, Coinstar doesn't take a share of the total. (Maybe you could add that gift card to your holiday gift stockpile!) This next tip is one of my favorites...

15. Set up an auto deposit to your savings account.

Several banks offer a service that deposits a dollar to your savings account every time you swipe your debit card for a purchase. That's another thing that — for most people — won't hurt much in the moment, and will add up in the long run. Some banks even waive savings account fees if you opt in to this service.

I don't mean accessing your brick-and-mortar account on the Internet; I mean opening an account with an Internet bank (like Ally or Simple). While it's totally possible to spend money from these accounts (and even withdraw cash), they typically require an extra step, and that might be just enough hassle to convince you that you'd rather keep your money in the account. Also, by opening an account at an online bank (rather than the one where you have your everyday accounts), you won't constantly see the balance and be tempted to spend that money.

The idea behind this one is that you'll spend 50 percent of your income on essential expenses (i.e., housing, groceries, transportation, and utilities), 20 percent on financial obligations (paying down debt, savings, retirement, and emergency funds), and the rest on personal-choice items like dining out, clothing, and entertainment.

Being frugal doesn't necessarily mean you have to skip vacations! With this plan, you'll save $1,000 in two months (take note of the $300 you'll need to set aside for weeks four and five). (P.S. If you don't have an emergency fund set aside yet, you might want to use this plan to fund that before the vacation!)

20. Ultimately, it all comes down to this:

Take a second to think about what you wish Past You had done for Present You...and now do that for Future You. With some dedication, motivation, and a couple of these tricks, you can craft a happier financial life for yourself starting today! Share this list with someone who might be able to use it — maybe you can hold each other accountable over your no-spend month!