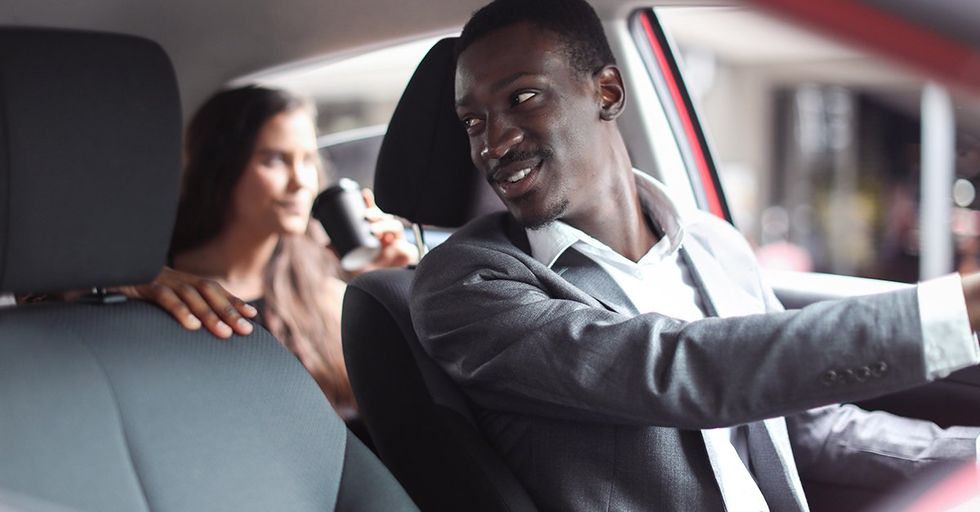 We all have different approaches to our ride-sharing experience. Some of us like a nice, quiet ride. Others are chatty, and enjoy getting to know people for a few minutes. But there's really no way to communicate what kind of rider you are beforehand, is there? You've just got to go with it.

Well, one Uber driver figured he would make it easy for his riders! Because he offers a sort of menu for rides, so his riders will always get the experience they want. And people are pretty much agreed that this driver's menu is both hilarious and a brilliant idea!

Take a look at this Uber menu. I bet you'll even see some ride-styles that you've never thought of before!

Ride-sharing apps are a new version of taking a taxi.

They've all but replaced taxis, and very few people who regularly need a ride somewhere don't have apps like Uber or Lyft on their phone.

You never know exactly what kind of ride you'll get.

Obviously, the goal is to go from point A to point B without incident. But personality-wise, who knows that the ride is gonna be? Your driver might be eager to talk or joke around, or they might be the silent type.

And riders have different standards for a good ride.

I'm more of the sit quietly and jam to music type. But plenty of people look to engage their drivers, or even just want someone to talk to.

So, George, the Uber Driver is really clever.

Because he wants his riders to know that they've got options!

And we're loving this menu.

A stand-up comedy while you're still in the car? Sign me up!

And how about that Rude Ride?

It's like those old-timey diners where the wait staff is purposefully mean to you but in an Uber!

BTW, the rider who posted this went for the Therapy Ride.

Hey, real therapy can be super expensive. If your Uber driver is offering, why the heck not?

Therapy: sometimes you've gotta take it where you can find it.

Apparently, George made a decent therapist.

Wow. George does not participate in false advertising, does he? That actually sounds like a pretty good therapy session.

But after first posting this, nobody could find George and tell him firsthand!

But the love is there in spirit.

@LuisLovesGoats @alexisjaileen *searches how to give 5 stars to someone else’s Uber driver*
— Chief of Sauce (@Chief of Sauce)1551168538.0

Honestly though, Uber just needs to give this guy a bonus for being awesome.

There were some differences of opinion.

Yeah, yeah, therapy can be uncomfortable. But it is really good for you!

Here's another vote for the standup special.

There's nothing like some true crime and sage wisdom blended with humor!

And here's a die-hard silent type.

Sometimes, it's just way more comfortable to stay in your own head and not deal with strangers, you know?

@justbrad @LuisLovesGoats @eazy_eric_ I always give 5 stars for the silent drivers and less for the chatty ones tha… https://t.co/eZveFDjCna
— Crochet Connor 🌟 (@Crochet Connor 🌟)1551141997.0

In fact, they're the type to send messages through tipping. It's always good to have a perception on your side when you've got a people-facing job like'Uber driver.

Apparently, multiple people have had Uber-therapy.

Sometimes, getting a fresh perspective on your problems can really help.

Then there's THIS kind of ride!

To each their own. It's like the opening to an interactive horror movie!

While some people couldn't decide.

@LuisLovesGoats @remydelfox I’m actually torn between the therapy ride and the creepy ride
— who leon (@who leon)1551153634.0

They both sound intriguing, for sure...

One person wanted some more options.

Hmm. That sounds potentially very hazardous. Maybe just save it for a roller coaster?

Then again, apparently some drivers already have this problem.

If the length of the ride allows for it, then I guess it's just as well to get the best of both worlds!

Whoever this George guy is, he's got the right ideas!

Aww! We can all go and say hi to George!

The original poster was so happy!

It's really not every day a stranger offers to just listen to your problems and be supportive, too!

We love a good, safety-conscious selfie.

And he gave Luis (the original poster) a shoutout!

This has been an extremely wholesome series of tweets to watch unfold.

BTW, this literally blew up overnight.

George just started his Twitter, and he already has over 3,000 followers!

George just started a GoFundMe, too.

Driving a manual car around Seattle definitely sounds like an unnecessary pain!

Everyone loves a happy ending.

And George is getting the kudos he deserves for his hilarious Uber menu.

Please and thank you! Ever had an Uber driver this awesome? Share this story with your other friends who frequently use ride-sharing apps!