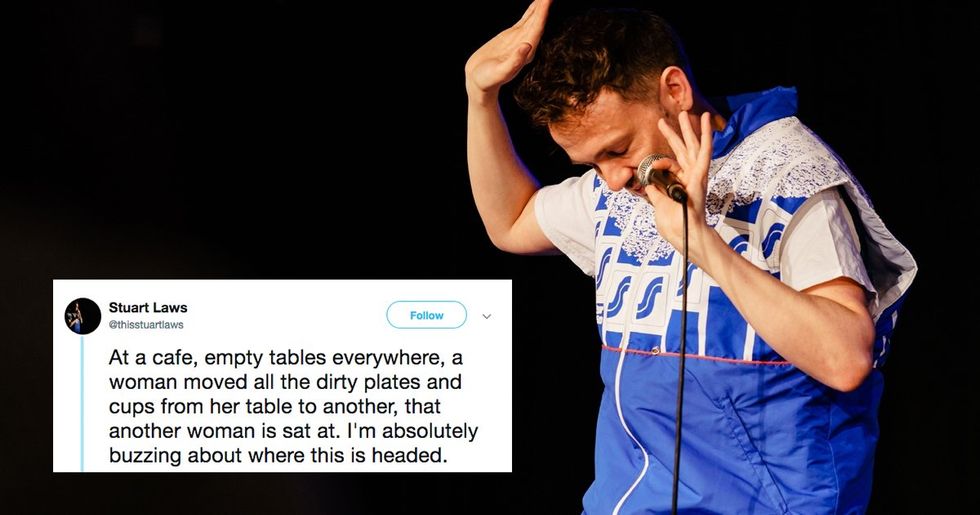 You never know where you might encounter some drama. It can happen literally anywhere where there are at least two people. Or one person and a phone and/or a computer, I guess.

British comedian Stuart Laws just happened to witness some good old-fashioned drama at a coffee shop. And, as luck would have it, he live-tweeted the entire exchange. It all started when two women had a bit of a social altercation over some dirty plates that had been left on a table. Not a big deal, right?

Wrong. It turned it a very, very big deal.

As you read through Laws' Twitter thread, you'll definitely find yourself sympathizing with one of the women more than the other. But the complete and total Power Move that occurs in the final sweet is just *kisses fingertips*. It's perfect. It's wonderful.

Thank goodness for drama, for Twitter, and for people like Stuart Laws who combine the two to great effect.

The story starts with a bang:

At a cafe, empty tables everywhere, a woman moved all the dirty plates and cups from her table to another, that ano… https://t.co/VdcWz8Ts3m
— Stuart Laws (@Stuart Laws)1555334878.0

One woman moved a bunch of dirty plates to the other woman's table. Why? Why would anyone do that?!

The move was even more bizarre because there were plenty of empty tables in the café.

Just...put the plates at an empty table. Or bring them to the counter. You had so many options.

Obviously, the second woman was rather put off by having a bunch of dirty plates at her table.

Clean woman has started moving all the dirty plates back from whence they came. Dirty plate woman has broken the si… https://t.co/LTCTlDKoNG
— Stuart Laws (@Stuart Laws)1555335226.0

So she simply moved them back. Which, I have to say, is also a pretty bold move.

She explained her actions:

But the first woman was having none of it. How is this an exchange that two real, living people had in real life?

I know what you're thinking. The book club meeting probably has nothing to do with this story. Oh, my friend. It does.

The plates were still moving.

I'm picturing this scene and, guys, I just can't. I also love how they have names now. Dirty Plates Woman and Clean Woman. Whose side are you on?

Laws thought he could just observe from afar...

...But no. Clean Woman wanted his help.

Dirty plates woman just dropped a mug on the floor and then raced back to her table and opened a book
— Stuart Laws (@Stuart Laws)1555336318.0

I don't know if she dropped the mug on purpose to create a distraction or if she just saw her chance and bolted, but WOW. I am so invested in this story now.

Finally, the staff got involved.

Staff member has reluctantly walked over at the sound of the mug and now clean woman is trying to explain the situa… https://t.co/N61w3DCU6q
— Stuart Laws (@Stuart Laws)1555336427.0

Oh, the staff member is confused? Join the club! We're all confused!

I have no problem being a witness to juicy drama, but I do not want to be pulled into it. Especially while I am live-tweeting the whole thing.

Eventually, things seemed to more or less fizzle out.

"I think this is the drama over," Laws wrote. How wrong he was.

Yeah. Turns out, both women were participants. In other words, this story just became approximately 12,000 percent jucier.

It's the first meeting of the book group and they are all introducing themselves to each other and the head of the… https://t.co/m8soEHeIt5
— Stuart Laws (@Stuart Laws)1555337193.0

Know each other? Well, as a matter of fact...

Yep. She went there.

You have to admire CPW, here. Putting an almost total stranger on blast at a first book club meeting? Come on. That is bold.

Then the meeting got rolling.

Hey! I just read that book recently! I'm sad to report it did not result in any juicy drama in my real life.

Finally, the Clean Woman (lol) made her move:

Not to be outdone, Dirty Plates Woman retaliated:

DPW calmly excused herself to go to the toilet, came back with water, put it down on table and knocked it over CPW'… https://t.co/z3VzMrocOa
— Stuart Laws (@Stuart Laws)1555339789.0

Dirty plates! Spilled water! Patrick! Is there anything this story doesn't have?

There is so much to unpack here.

Others in the group helped clean up water, no one really seems to understand that their book group has a broiling s… https://t.co/GTqj0fnPYx
— Stuart Laws (@Stuart Laws)1555340124.0

Honestly, Nine Perfect Strangers was fine (I gave it 3 stars on Goodreads), but the drama involved in this book club meeting is definitely 5-star material. Are we sure Liane Moriarty wasn't sitting off in the corner somewhere taking notes for her next book?

The group switched to talking about future books.

The Psychopath Test. I cannot. She knows exactly what she's doing. At this point, I am firmly in CPW's camp.

Official Book Group is over but it's now unofficial socialising time, two people made a quick getaway, the rest are… https://t.co/MOSkqubG9o
— Stuart Laws (@Stuart Laws)1555340921.0

Book club came to an end, but CPW was left wanting a bit more. What could she do?

P.S. Here's a quick note about the names:

I guess CTW is "Clean Table Woman," but honestly, none of that matters anymore. I just need to know how the rest of this story is going to play out.

OK, CPW, I am still on your side, but yiiiiiiikes. If this were a season of Survivor, I'm pretty sure the jury would consider this a Big Move.

Patrick is basically all of us. But also kind of dumb.

Once again, Laws assumed this was the end of the coffee shop drama.

Ever the artist, he promised to write a fake ending before sharing what actually happened, assuming real life would be boring. (Spoiler alert: It was not.)

He also provided this background info:

Someone requested a little more detail on the protagonist and antagonist (it's up to you to decide which is which I… https://t.co/GHosXAqFqw
— Stuart Laws (@Stuart Laws)1555342340.0

Now I can really see the characters. Thanks, Mr. Laws. Much appreciated.

This would definitely have made things pretty awkward!

I love the handshake from Patrick. Patrick, you lovable goofus. You're quickly becoming my favorite character in this whole affair.

Obviously, Laws was pretty stressed out by this point.

And no wonder! He'd spent more than two hours documenting everything by this point.

But there was one final twist.

What could it be? Well, it's quite simple, really:

*DPW drops the mic* OK, that's it. What a power move. I am now wholly in DPW's camp now. I don't even care why she moved the dirty plates in the first place. She is my queen. Thanks to Stuart Laws for the laughs! Share this with someone who loves a juicy story.