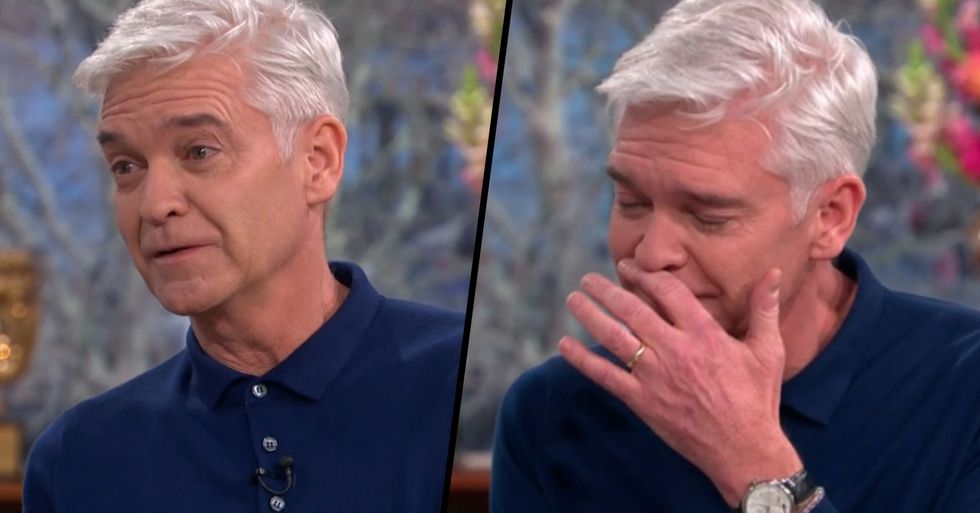 Phillip Schofield is a very much loved British TV presenter and he is somewhat of a national treasure, for the U.K.

He has spoken emotionally live on TV, so keep scrolling to see the video...

Phillip Schofield is one of Britain's national treasures.

The fifty-seven-year-old TV presenter is best known for presenting the morning chat show This Morning alongside Holly Willoughby.

He has been a big TV personality for years now...

And his career in presenting dates all the way back to the 1980s.

Phillip has been married for nearly twenty-seven years...

He and Stephanie Lowe married in 1993, and they have 2 daughters together, Molly and Ruby.

But you can never truly know what is going on behind closed doors.

Phillip made a shocking announcement this morning...

He took to Instagram via his story to announce that he has realized over the years that he is, in fact, gay.

He has been struggling with coming to terms with this fact...

"You never know what's going on in someone's seemingly perfect life, what issues they are struggling with, or the state of their wellbeing - and so you won't know what has been consuming me for the last few years," he wrote. "With the strength and support of my wife and daughters, I have been coming to terms with the fact that I am gay."

Of course, this is heartbreaking for his family.

"This is something that has caused many heart-breaking conversations at home. I have been married to Steph for nearly twenty-seven years, and we have two beautiful grown-up daughters, Molly and Ruby," he said. "My family have held me so close: they have tried to cheer me up, to smother me with kindness and love, despite their own confusions. Yet still I can't sleep and there have been some very dark moments."

He is feeling pain and confusion, but he is also feeling proud.

"My inner conflict contrasts with an outside world that has changed so very much for the better. Today, quite rightly, being gay is a reason to celebrate and be proud. Yes, I am feeling pain and confusion, but that comes only from the hurt that I cam causing to my family," he explained. "Steph has been incredible - I love her so very much. She is the kindest soul I have ever met. My girls have been astonishing in their love, hugs and encouraging words of comfort."

This will be a very difficult time for his wife and children...

"Both mine and Steph's entire families have stunned me with their love, instant acceptance, and support. Of course, they are worried about Steph, but I know they will scoop us both up." "My friends are the best, especially Holly, who has been so kind and wise - and who has hugged me as I sobbed on her shoulder."

He has been inspired by the people he interviews on a daily basis...

"Every day on This Morning, I sit in awe of those we meet who have been brave and open in confronting their truth - so now it's my turn to share mine," he continued to say.
"This will probably all come as something of a surprise and I understand, but only by facing this, by being honest, can I hope to find peace in my mind and a way forward. Please be kind, especially to my family."

He spoke about his announcement on This Morning today...

And speaking to co-host and close friend, Holly, he admitted it feels a little bit lighter now he has come out and said it - especially to his family.

He also admitted that it was a shock for them...

But they have fully accepted him for who he truly is and they continue to love and support him.

The British public have showered Phillip with love and support...

And they are all so proud of his bravery and courage.

Many have acknowledged how difficult it is to come out during a person's middle ages...

And the fact he has been married for such a long time has also heightened this difficulty.

Watch his appearance on This Morning here...

Our thoughts go out to Phillip and his family during this difficult transition, but we also want to say how much we support Phillip for coming out as his true self.