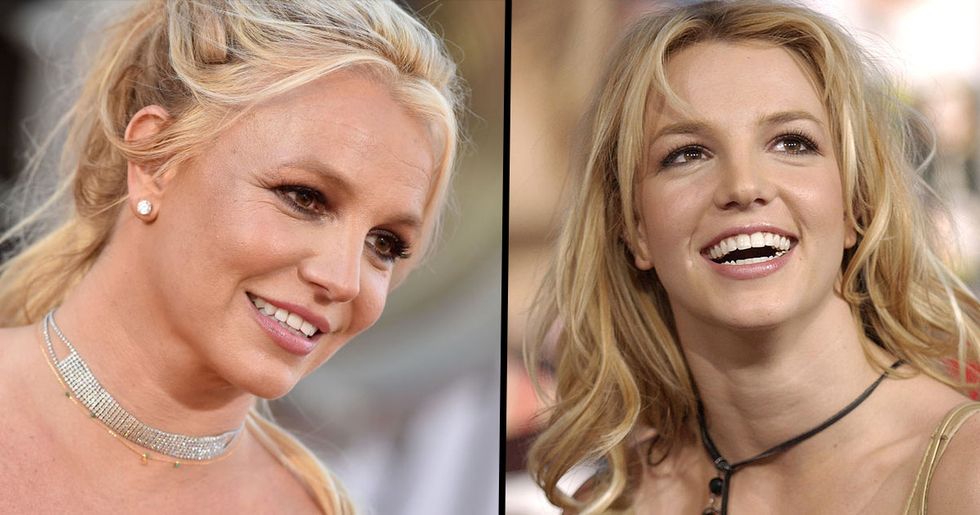 Pop sensation, Britney Spears, burst onto the music scene in the '90s as a fresh-faced sixteen-year-old with her cult classic hit, "Baby One More Time."

Throughout her career, the singer has remained pretty consistent with her trademark look as a blonde bombshell, but it seems she's had a change of heart recently, showcasing a brand new look.

Fans are going crazy over the star's latest hair transformation, as the "Oops!... I Did It Again" singer has been spotted sporting a newly brunette hair job, and we have to say she looks pretty amazing.

Keep scrolling to see her new 'do.

Britney Spears is an American singer and actress.

The thirty-seven-year-old was the pinnacle of late-nineties pop and went on to dominate the industry on a grand scale.

She rose to stardom because of one very famous hit.

If you haven't sung "...Baby One More Time" on karaoke, what are you doing with your life?

Her early hits serve as the ultimate nostalgia fix.

Tracks such as "Toxic" and "Oops!... I Did It Again" were big wins for the star. Not to mention the fact that several of her albums have hit number 1 on the charts.

But before becoming a pop sensation, Spears was a child star.

She starred in The All-New Mickey Mouse Club age eleven - a show that also featured several other soon-to-be A-listers including Justin Timberlake and Christina Aguilera.

When she became famous, she sported a trademark look.

The star stuck to her blonde locks for most of her career.

But she has had quite the journey with her hair.

No stranger to hair-experimentation, the star has been known to change up her look. So, before we get into her most recent change-up, let's look at how her hair has changed over the years.

When she first came into the spotlight, the then-teen sported dark blonde locks.

The star would often wear her hair in plaits or bunches, a style she showed-off on her "...Baby One More Time" music video.

As we move to 2000, the star opted for chunky highlights.

Still sticking to lighter hair, during her "...Oops!...I Did It Again" music video, her hair was styled slicked and straight, with a side-swept fringe. We personally love this look.

The following year, the singer opted for a loosely curled blow dry.

But she still stuck to her signature highlights, this time adding in choppy layers and a beach wave look.

She's also been no stranger to the tightly-curled style.

Like this time she attended the Grammy's donning a chop-stick curled half-up- half-down do.

She's also been partial to extensions over the years.

When she tied the knot, she took a dramatic u-turn when it came to her hair.

She dyed it brown - making this one of the first times that we saw the singer opt to go dark.

But she usually reverts back to blonde pretty quick.

It's clearly her favorite color.

In 2007, the world watched as she shaved off all of her hair.

At the time, Brtiney was struggling with her mental health and chose to shave off all of her hair at a salon.

But frequently flits between extensions, bangs, and choppy layers.

But now the star is debuting a new look once again.

And the internet is going crazy for it.

Britney was spotted donning Brunette locks while on a date night last week.

The image was snapped while the singer was having dinner with her boyfriend, Sam Asghari, at Cecconi's Italian restaurant in West Hollywood. "She seemed super happy, smiling and laughing a lot," an eyewitness said.

The picture may be blurred, but fans think that she looks incredible.

From the small glimpse they have gotten, it looks like fans can't get enough of her new 'do.

Fans are eager to see her brunette hair in all its glory.

But her hair is far from the only thing keeping the star in the headlines.

Fans think that something fishy is going on after her manager said she may never perform again. In fact, it raised suspicions so much that a #freebritney movement has started. Keep scrolling to unravel this shady saga.