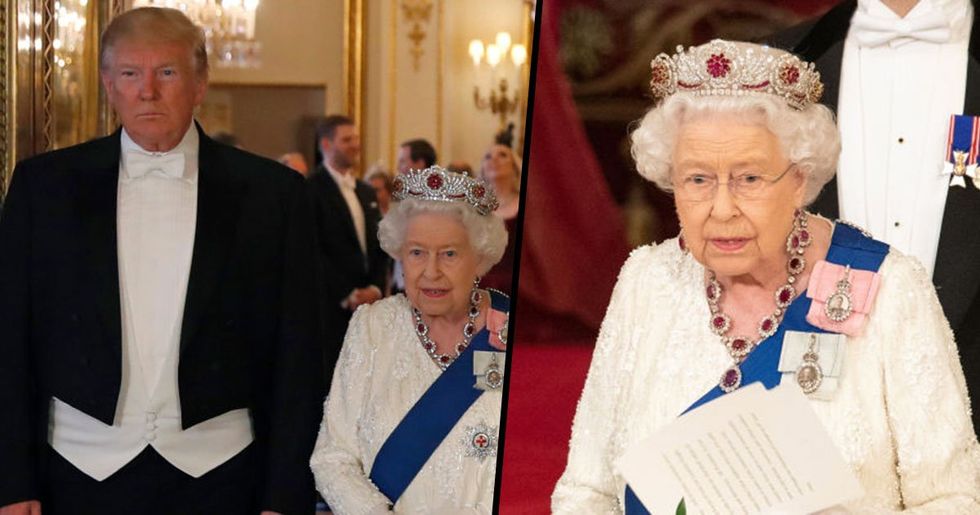 In case you hadn't already heard, the President of the United States has had his state visit to the UK this week and I think that the initial shock of his visit is finally wearing off. Kind of. But it seems as if the British people are still in two minds about the whole thing. With protests still continuing to take place up and down the country, the Brits are making sure that their opinions on the President are heard, whether they are in favor of or against him.

But this article concerns more than just the general public. The Mayor of London, other political figures, and even the British monarchy seem to be sending subtle messages of their own, including Her Royal Highness, Queen Elizabeth. The tiara that she was wearing at the official state banquet, which took place at Buckingham Palace, might be more significant than you think...

Donald Trump's three-day visit to the UK has come to an end.

He arrived on June 3rd along with First Lady, Melania.

Even before he stepped into the country, he had managed to ruffle a few feathers.

Trump is known for his unfiltered opinions, but if you're going to visit a country that you consider to be one of your most precious "allies," typically, you would refrain from insulting the people that run it.

He likes to do things in a more unique way. And I use that term very lightly. Before he stepped off his helicopter, he sent out a few insulting tweets, as he often likes to do. His shots were primarily fired at the Mayor of London, Sadiq Khan. However, if I was Trump, I would have maybe picked a better insult than "stone cold loser"...

Trump has been on a roll lately. His next victim was Jeremy Corbyn. Corbyn is a prominent political figure in Britain, and absolutely nothing like Trump, so it made sense that he rejected meeting him. When asked about the current Labour leader, he said: "I think that he is, from where I come from, somewhat of a negative force. I think people should look to do things correctly rather than criticize".

Even though he had only been in the country for only three days, he made a massive impact.

And the British public has retaliated accordingly. I'm sure that you've all heard about the giant penis by now and we're all for the message behind it. Do you believe in climate change now, Mr. President?

And we can't forget about the protests, can we?

It seems as if the Brits really weren't excited about Trump's arrival, so naturally, there were some protests against it. The first took place in Manchester. Hundreds of people turned up with flags representing lots of different nationalities, including the Mexican flag in protest against some of Trump's controversial policies.

The second one took place in the capital of England, London.

With over 250,000 people in attendance, including Jeremy Corbyn, this protest was the biggest held against Trump since he was elected as president in 2016. And it saw the return of the iconic "Baby Trump Blimp," which flew high over the skies in London. Even though some people were in favor of Trump's visit, the overwhelming majority were "appalled" that he was even allowed into the country.

Despite all of the negative press, Trump believes that it's all "fake news".

Sometimes I really do wonder how the President sees the world. The protests have been going on for the entire length of his visit, but, according to him, they don't exist. Okay, Donald, whatever you say... But we have receipts.

And Trump just wouldn't be Trump if he didn't stick his nose where it doesn't belong.

He decided to make comments about Brexit and who he believes would be the best candidate to take over Theresa May's position after she resigns on Friday. Who did he back, I hear you ask? The ever-so-graceful, Boris Johnson.

If you're familiar with British politics, unfortunately, you will know all about Boris Johnson.

He doesn't have the best track record, to put it nicely. His constant need to cycle everywhere and his lack of professionalism when dealing with societal issues means that people don't take him seriously - not to mention he's been involved in a cheating scandal that made global news. It goes without saying, the public didn't take too well to Trump's personal choice.

In true British fashion, they dug up an old video from 2016 in which Johnson is insulting the President, saying that he's "unfit for office". One group of Brits proceeded to project the quote onto the side of a building for the whole capital to see. Bit awkward, to say the least. I hope Donald didn't see it.

But since this is a state visit, Trump is expected to carry out his official duties.

Yesterday, the President met with Theresa May to discuss issues such as immigration and climate change. Yes, even though Trump doesn't fully believe that global warming exists, apparently, they did have had that conversation. Finally.

And it wouldn't be right if he left without saying "hi" to the Queen.

Donald Trump joined the Queen and other world leaders in Portsmouth to commemorate the 75th anniversary of the D-Day landings. A crucial turning point for World War II and to this day, it remains the largest seaborne invasion in history.

The President was invited to Buckingham Palace.

He must have made a pretty good impression since he was invited back to the palace for a royal banquet alongside some other important figures including Theresa May. Queen Elizabeth gave a speech outlining the importance of the British spirit, especially during the war and even toasted to the President of the United States. It seems as if she really warmed up to him. Or was forced to...

That smile on the Queen's face may just be a formality.

Royal commentator, Victoria Arbiter rounded up the event for us: "It’s about reaffirming relationships and it is the Queen’s constitutional duty to lead the visit regardless of how controversial the figure might be," she writes in a Twitter thread.

But the internet had other opinions on what Queen Elizabeth was thinking... and she might have not been aware of it herself!

You would probably think that it's a bit of a reach, but it's hard to brush it off as a coincidence when all the evidence presents a good argument. Keep reading to see if you're convinced, as some are, that the Queen (or her stylist) is secretly anti-Trump.

The first thing you notice about the Queen, or any royal, is the headwear that they are sporting.

With so many options to choose from, is it a coincidence that she opted the tiara with a very specific backstory?

It's all in the jewels.

The Queen arrived at the state banquet dinner wearing a Burmese ruby and diamond tiara styled with a matching necklace. The tiara had ninety-six rubies; it was a gift to the Queen from the people of Burma, which was still under British rule at the time. In 1973, she had them incorporated into a royal headpiece.

This is the funny thing about the tiara...

The royals tend to wear things that radiate a powerful message; their decisions aren't often merely aesthetic style choices. In this case, the rubies in the crown are rumored to ward off evil forces. A splendid choice, if I do say so myself.

And, naturally, Twitter is going wild over the fact that the Queen wore this particular crown while meeting Donald Trump.

One user (@_Ms_J) emphasized that the Queen must have been aware of the symbolic meaning behind her tiara. I definitely think that it was not just a random spur-of-the-moment decision in which she, or her stylist, just happened to pick the tiara used to ward off evil.

@MacKinnRuth decided to break it down for those who still didn't get the importance of it.

And when Trump tweeted this after the banquet, users couldn't help but troll the President even further.

And we can't blame them!

This response was hilarious.

@realDonaldTrump The queen throws shade on you in every instance. Her tiara last night was given to her to ward off… https://t.co/KnAG29PqYJ
— Leeannallama🌊 (@Leeannallama🌊)1559652634.0

Some people think that the Queen definitely did this on purpose.

However, some royal commentators have spoken out since the rumors started circling.

A blogger on Court Jeweller expressed her thoughts on the matter: "The Queen often uses her brooches to make statements, but like everything else she does, those statements are diplomatic. Jewels are used as a gesture of acknowledgment, not insult; they're used to build and reinforce bridges, not burn them down."

She then went on to write about how the Queen tries to avoid political messages.

"The Queen isn't in the business of causing controversy. Her entire six-decade reign has been geared toward avoiding controversy as much as possible. She is the living embodiment of the state, and in that representative role, she remains studiously neutral". So maybe she wasn't really shading Trump, but Twitter still isn't convinced.

Some have even gone on to compare the Queen's choice of headwear that she wore for Obama's visit to the warding-off-evil number.

@realDonaldTrump @IngrahamAngle The Queen’s got game! It’s a good thing she wore her Burmese Ruby Tiara to protect… https://t.co/UEajD2ujTL
— Annie B (@Annie B)1559758797.0

I mean, if the Burmese tiara with the rubies was one that she wore for other important events, we would have seen it more often - perhaps at Obama's visit to Buckingham Palace - but she opted for a diamond encrusted one for that event... Interesting.

We can't make any definite conclusions, so let's just leave it open to personal interpretation.

What do you think? Is it all a coincidence or did the Queen intend to troll the President? I wonder if he's reading through all the conspiracy theories surrounding this rumor with that sour look on his face. He definitely won't be impressed.

However, it seems as if the Queen did enjoy Trump's company throughout the visit.

She was seen to be smiling with the President, so maybe he has been brushing up on his conversational techniques.

I'll leave you with this image of Trump with the Queen because the caption is extremely hilarious.

Pretty much sums it all up.

We hope that the President enjoyed his stay in the UK.

And the next time he decides that he wants to come back, maybe he'll return with a message of his own for Her Royal Highness.