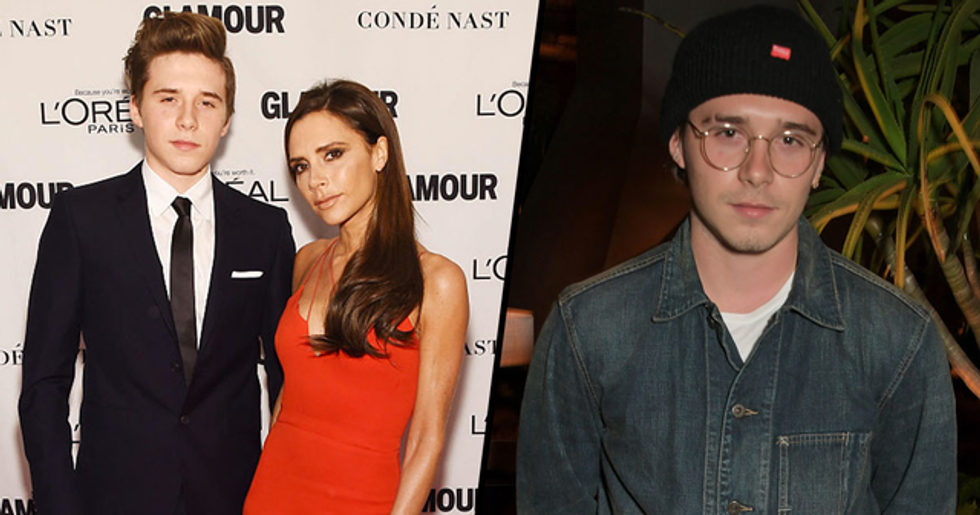 The Beckhams are universally known as one of the best-looking family's in the world.

So when news came in of Brooklyn's new girlfriend been a Victoria Beckham look-a-like, well... None of us were really that surprised. And they do say that all men end up marrying women who resemble their mothers, so maybe it isn't that weird...

Keep scrolling to find out about Brooklyn's newest love interest, and to see her uncanny resemblance to his mom...

Brooklyn Beckham has grown up in the world's spotlight.

With his Dad being David Beckham, one of the most famous soccer stars in the world, it's hardly surprising that Brooklyn has grown to become a bachelor in his own right.

The aspiring photographer hasn't been shy with his love life...

And has had a constant stream of girlfriends and potential love interests on and off throughout his teens and early adulthood.

Brooklyn's most highly-publicized relationship was with the actress, Chloe Grace Mortez.

After reportedly meeting at a spinning class, then fifteen-year-old Brooklyn and seventeen-year-old Chloë were first pictured together when they went skateboarding in Santa Monica.

The pair dated on-and-off for 4 years.

However, last year Brooklyn was pictured kissing the Playboy model, Lexi Wood, just a month after been seen out and about and seemingly in love with Chloe. Not your best move, Brooklyn...

The pair officially called it quits after the incident.

Which left Brooklyn well and truly back on the market. Form an orderly queue, ladies...

The twenty-year-old has become somewhat of a heartthrob to thousands of girls across the world...

So he obviously wasn't going to stay single for very long. He had quite a publicized relationship with the model, Hanna Cross - The pair were together for 9 months but had had several high profile arguments before their split.

As predicted, Brooklyn was a busy boy...

And he has reportedly found love again. Sorry, ladies.

Yep, she looks just like his mom, Victoria Beckham.

Brooklyn has always been close to his mom...

And, throughout his life, he has been regularly spotted accompanying her as her plus one to various different events across the world.

The Beckhams are very family-oriented.

And they regularly show off their family outings on social media.

So it would make sense that Brooklyn would date someone who reminds him of his family...

Maybe? I don't know, I still find the whole thing rather strange.

And the actress bears a striking resemblance to the '90s version of Victoria Beckham, don't you think?

It is believed that the pair have enjoyed several dates together...

And Brooklyn doesn't seem too fazed by the fact that Phoebe used to work as a Victoria Beckham lookalike before her acting career took off... Okay, that's just creepy. A source told The Sun, "But Phoebe told pals that she actually did a few jobs as a Victoria lookalike in her early modelling days, the money of which helped fund her university course. Presumably, she never thought she might one day meet her idol."

And people were quick to notice her resemblance to the former Spice Girl...

According to reports, Brooklyn has been "teased by his friends" over how similar Phoebe and his famous mother look.  "Bizarrely though, from a certain angle she does look terrifyingly like his mother, Victoria."

The source continued, "A few of his friends have teased him about it but Brooklyn is adamant that there is nothing 'Oedipal' about it - or words to that effect."

But this isn't the first time the Beckham boys have been in the headlines this year...

Brooklyn's love life aside, the O.G Beckham, David came under fire a couple of months ago for a "cute" photo he posted of himself and his daughter, Harper, on Instagram... And the internet was divided. Keep scrolling for the full story...