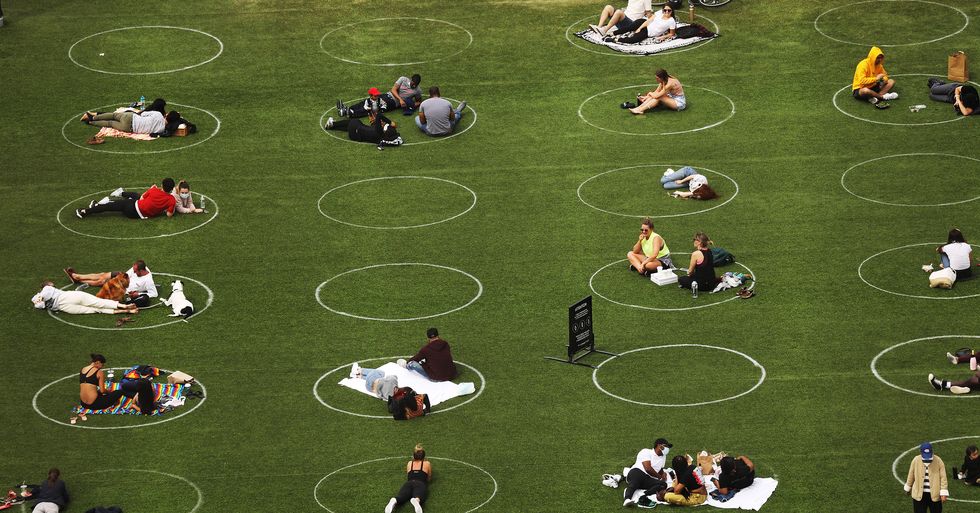 A Brooklyn park has had a makeover... but not one that we would expect.

Keep scrolling to check out the newly painted circles in the park to ensure social distancing in one of the world's worst-affected areas...

Amid the ongoing pandemic, New York City has been one of the worst affected cities in our country.

The Big Apple has been hit notoriously hard by the deadly virus, but this doesn't seem to be fazing its residents.

The strict lockdown restrictions have been falling on deaf ears...

As thousands of New Yorkers continue to ignore the rules implemented by the government.

Obviously, this kind of unruly behavior could be incredibly damaging...

And could ruin all efforts in combatting the virus.

It is of the utmost importance that New York remains locked down...

Or there could be devastating consequences.

It's safe to say that the city has been struggling...

But in the typical New Yorker fashion, communities have been powering on through these difficult times.

And it's no secret that the cities healthcare workers have being worked to their limits.

Yet, despite these shocking numbers...

Over the weekend, thousands of people were filmed sunbathing in parks all over the city.

And now, a doctor has spoken out to condemn those breaking the lockdown rules, and to outline just how they're affecting the lives of the heroic medics out on the front line.

And he is not impressed.

Cleavon Gilman, a doctor at the New York-Presbyterian Hospital in Washington Heights, tweeted his disapproval, alongside a video of New Yorkers sunbathing in the park.

He had a harsh message for those breaking the rules.

"16,000 New Yorkers dead in 8 weeks! This is a SLAP in the face to healthcare providers nationwide risking their lives and dying on the frontlines of the coronavirus pandemic. I’m in Central Park right now and it’s business as usual."

But despite these fearful messages...

Many people are arrogant enough to just simply not care and go about their days as they please.

But one park in Brooklyn has decided to take their social distancing efforts a step further in a desperate attempt to stop people from gathering in big groups.

Domino Park in Brooklyn has decided to paint circles on the grass where people can sit - at a safe distance.

These new measures were implemented over the weekend...

People were seen lounging in the warm weather, reading, relaxing, and socializing with friends in their own individual circles.

Each circle can fit around 5 people in...

But it's better than having every single person in the park sitting side by side.

It is surreal seeing our public spaces be transformed like this...

They’ve made little round human parking spots in Domino Park in Brooklyn! (This park is often the poster child for… https://t.co/WhHbPWgNNK
— Jennifer 8. Lee (@Jennifer 8. Lee)1589558104.0

A park-goer, who referred to the circles as "human parking spots" on Twitter, told the New York Post: "If you were to take video footage from the world today and show it to someone from 2019, they would think it was from some near-future Hollywood dystopian television show instead of real life."

Even though it is extreme...

It is totally necessary if people are going to continue to refuse to abide by lockdown rules. Make sure to keep scrolling to see the horrifying effects that the virus has on the body...