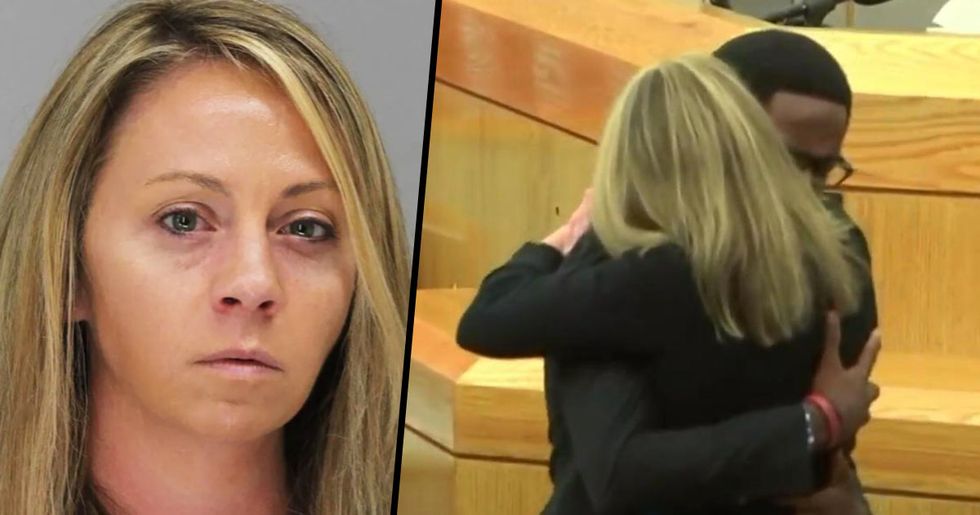 The court found holes in her defense and she was subsequently sentenced to 10 years in prison for the murder.

Her sentencing was a moving event, with members of Botham's family openly crying throughout. However, his brother seemed willing to forgive Guyger and actually embraced her after her sentencing in an emotional hug.

And now, she has finally been sentenced...

To a mere 10 years in prison. The jury, which found Guyger guilty of murder on Tuesday, reached a unanimous decision on the sentence after listening to Jean's and Guyger’s families, friends, and coworkers over 2 days of emotional testimony.

She was facing between 5 to ninety-nine years in prison...

However, Judge Tammy Kemp allowed the jury to consider the “sudden passion" defense, which carries a reduced sentence of 2 to 20 years. This meant jurors were able to consider whether Guyger killed Jean in an act of “sudden passion" caused by unforeseen anger or terror “sufficient to render the mind incapable of cool reflection."

This is not justice.

Speaking to reporters after the sentencing hearing, Botham's mom, Allison Jean called on the city of Dallas to "clean up" the police department. She criticized the investigation into her son's killing and the training that Guyger received. "Ten years in prison is 10 years for her reflection and for her to change her life but there is much more to be done by the city of Dallas," Allison Jean said. "The corruption that we saw during this process must stop."

At the sentencing, she described the impact that losing her son has had on her life.

"My life has not been the same," his mother, Allison Jean, told the jurors. "It's just been like a roller coaster. I cannot sleep, I cannot eat."

His dad, Bertrum Jean, broke down in tears several times throughout the sentencing.

"My son Botham was dear to me," he told the jurors in tears. "How could this happen to our family? How could we have lost Botham?"

But his brother has been willing to forgive.

Wow I've never seen this before at a sentencing hearing: Botham Jean's brother asked the judge if he can hug Ambe… https://t.co/av8MKWL6pt
— Bobby Allyn (@Bobby Allyn)1570052266.0

And, in an incredibly emotional moment, he actually embraced Guyger after her sentencing and told her that he forgives her for taking his brother's life. This is what true forgiveness looks like.