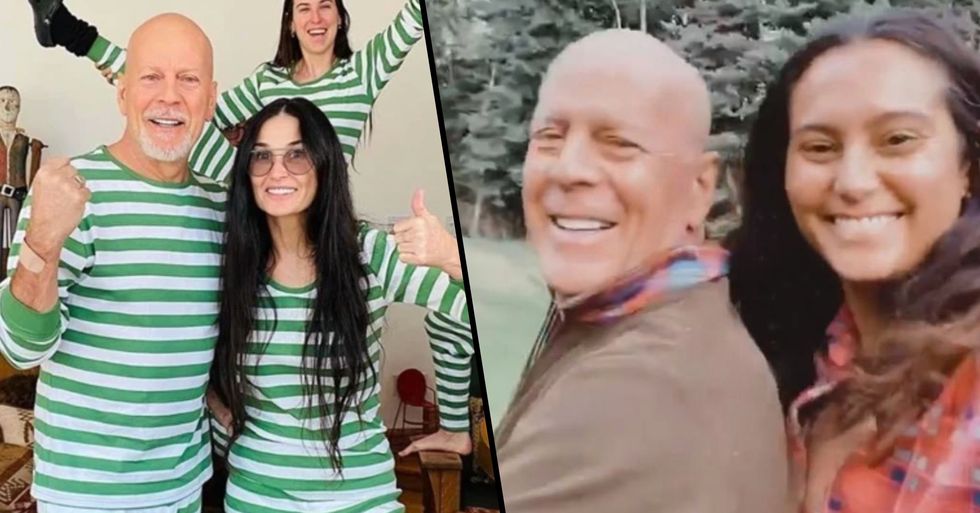 Bruce Willis self-isolating with ex-wife Demi Moore has been the gossip of the century.

His current wife has been taking things pretty well, and finally, Bruce has made the decision to reunite with his other half, but in quite an unusual way...

Bruce Willis self-isolating with his ex-wife, Demi Moore, is all anybody can talk about recently.

His wife has kept her cool, but now, it seems that she has finally gotten her own way.

It's no secret that Hollywood actress Demi Moore has had a turbulent few years...

It all started with the release of Demi's memoir last year...

Bruce has been staying with them - forming one big, happy family.

The gang looked very happy to be in each other's company...

And we must say, they all looked incredible wearing their matching striped pajamas.

She seemed to be pretty cool with it...

But as any wife would do, Emma decided to keep up to date with the cryptic Instagram messages aimed at her husband and his bizarre situation.

She took part in a viral Instagram challenge recently...

Could this have been Emma's way of hinting her disapproval of her husband quarantining with his ex-wife?!

Never the less, the happy family photos continued to flood in...

We honestly don't know how Emma kept her cool throughout all of this...

But it seems like her time is finally here as it seems Bruce has reunited with Emma and their young children.

And it showed Emma reunited with Bruce riding a quad-bike with their 2 daughters - Mabel and Evelyn. How cute.

The family appeared to be having a lot of fun together...

It seems that this is were Bruce belongs right now...

And his 2 young daughters need him equally as much as his adult kids.

It seems as though Emma and the young daughters have moved in to quarantine with Demi, Bruce and the rest of the gang.

In a strange twist of events...

Emma has chosen to join her husband, and his ex. The pictures from their time reunited are in the grounds of the house where Bruce raised his elder daughters with Demi, while they were still married.

Make sure to keep scrolling to read about the most recent lockdown stories...