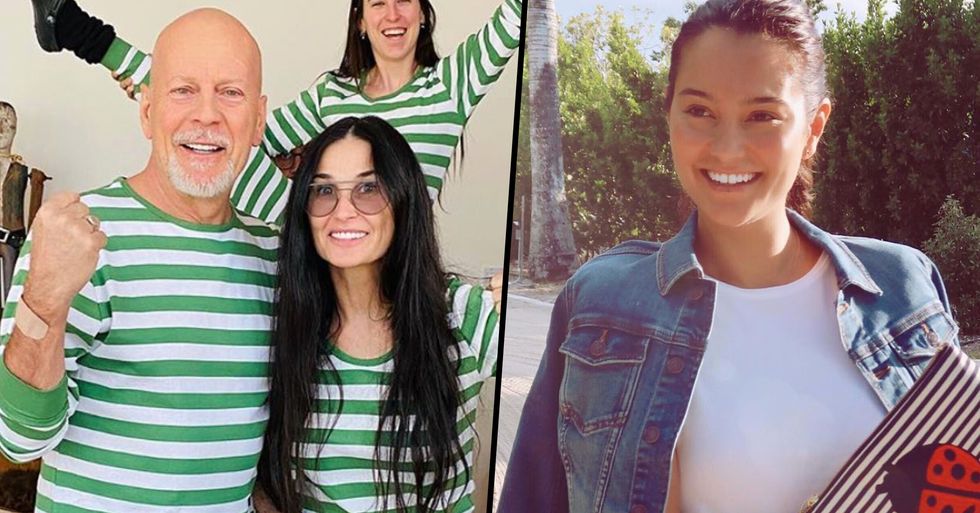 And even after Willis' actual wife, Emma, has sent Bruce a message, it seems as though Bruce is going to stay with his first family.

And now daughter Scout has offered an insight into the slightly strange arrangement.

Speaking on the Dopey podcast, Scout explained exactly how this situation had come to be.

"My stepmom was going to come up here too with my little sisters."

"[But] my younger sister… never gotten a talk about not f***ing with hypodermic needles…. she found [needles at a park and] she actually tried to poke her shoe with it and poked her foot."

"So my stepmom had to be in LA waiting to, like, get the results for taking her to the doctor."

"My dad came up here early and then travel got crazy and my stepmom stayed in LA with my little sisters."

Willis then got stuck in a virus hotspot.

The insider claims Willis was in the same area as Demi, where he has a house, but that the pandemic caused a complete lockdown and he couldn't get out.

"He has a house directly across the street from Demi's house in Sun Valley. It's been for sale for years. He was visiting and his family was considering quarantining there. He got stuck because Sun Valley became one of the hotspots."

And in spite of the fact Willis' daughters are going heavy with the quarantine content ...

Like this pic, showing Tallulah with a freshly shaved head and a t-shirt homage to her dad's most famous role ...

From afar, of course.

"Love you both so much."

The comment alone received 146 likes from fellow followers of Tallulah...

Showing that Emma clearly has support from the public for her gracious behavior while her husband quarantines with Demi.

Another comment on a video of Bruce and Tallulah read:

"This is actually melting my heart"

Her message of support to Bruce and their shared family is admirable.

For more on behind the scenes celeb quarantine content, scroll on...