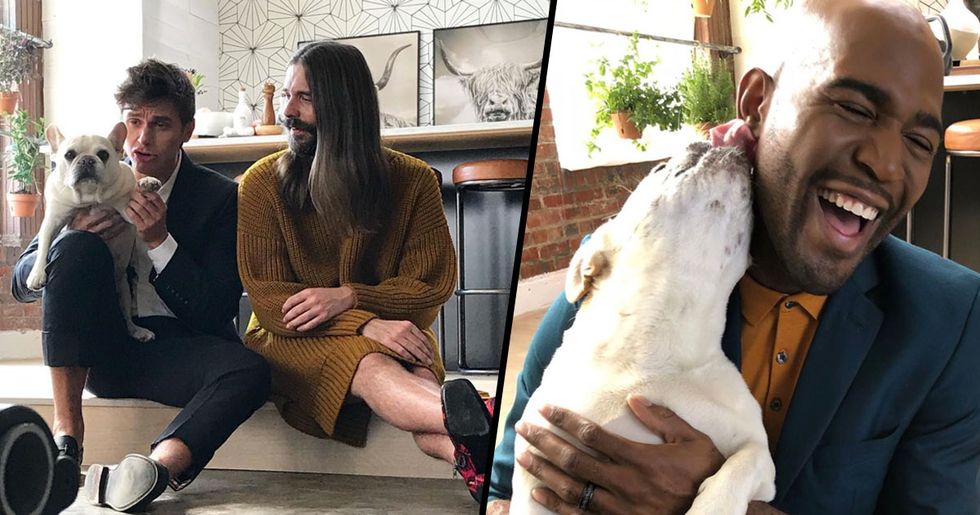 Queer Eye has quickly become a Netflix fan favorite, with thousands of us tuning in to watch the Fab Five makeover and transform the lives of people across Kansas City.

While we all love watching Karamo, Tan, Jonathan, Bobby, and Antoni work their magic, there's one 4-legged addition to the show that also won the hearts of viewers...french bulldog, Bruley. Owned by the show's producer, the pooch would regularly feature in the episodes - hanging out in the Fab Five's loft.

But, there's been some devastating news...

His owner took to Instagram yesterday to break the news that Bruley has sadly passed away, aged 10.

We were first introduced to Queer Eye's "Fab Five" in February last year.

But this wasn't actually the first time that Queer Eye hit our screens...

Netflix's version of the show is actually a remake of Bravo’s Queer Eye for the Straight Guys that aired a decade ago. Though reboots are often not as successful as the original show, it seems that Netflix defied odds with this hugely popular revival.

So what does a makeover from the Fab Five actually involve?

Those being made over on the show quite literally have every area of their life re-vamped. From a home renovation and brand new hairstyle to a whole new wardrobe, cuisine lessons and even life coaching - the Fab Five delve deep into the lives of each person featured on the hit series.

But it's much more than just a makeover...

Throughout the series, the Fab Five meet with a diverse line-up of contestants, from those with opposing political views to a trans man recently recovering from top surgery. The gang touch the lives of these people in a unique way. Throughout the series, the group have done some incredible things such as helping one guy come out to his family and helping another come to terms with the loss of his wife. They enable all of the contestants to learn to love themselves, and, for the viewer, the show's certainly an emotional rollercoaster.

The show is filled with tear-jerking moments.

Jess, who had been kicked out of her family home after coming out as gay, appeared on season 3 of the series. We watched her confidence grow as the Fab Five worked their magic and it was pretty emotional, to say the least.

The Jones Sisters from season 3 are a fan favorite.

Little and Shorty who own a BBQ stand had their lives transformed by the Fab Five. Not only did they get a brand new look, but so did their business. The guys kitted them out with brand new uniforms, outdoor seating, new branding, and even their own bottled BBQ sauce. And the best thing? Their business is still booming.

This episode had us feeling all the feels...

The first ever episode of the popular series featured Tom, who was deeply insecure. He was constantly calling himself fat and old; he even told the Fab Five, "You can't fix ugly." We're not crying, you're crying. But, after a makeover from the Fab Five, we see Tom's ex-wife, Abby, totally taken aback by the transformation - the couple even hold hands again. Want to know what makes it even better? They got re-married last year!

The series has propelled to TV stardom and has countless awards to show for it...

The Fab Five are so popular that they even recently featured in a very famous singer's music video.

That's right! It seems like some of our favorite celebs are fans of the show, too, as Johnathon, Bobby, Karamo, Antoni, and Tan make an appearance in Taylor Swift's music video for her single "You Need to Calm Down," donning glitzy, colorful costumes. Well, did we expect anything less from the Fab Five?

But someone else who's pretty popular on the show is Bruley.

If you're a fan of the show, you'll probably be aware of the Fab Five's furry friend, French Bulldog, Bruley.

Bruley joins the Fab Five in their loft on set...

Owned by the show's producer, Michelle Silva, who adopted him when he was just nine weeks old, Bruley stole the hearts of Queer Eye viewers.

But, there's been some sad news...

Michelle took to Instagram to break the devastating news that Bruley has passed away, aged 10. "My whole heart. My love bug. My best friend. My constant. My soul mate. My everything. I brought him home when he was 9 weeks old on a rainy day in New York City. Ten years later on a rainy day in LA, he passed away in my arms on my bedroom floor. Bru had been suffering from heart problems, and an instant heart attack was a possibility," she penned about her late pooch. "He just had too much love and heart for his physical body. It all happened so fast, but I held him as he took his last breath, and I was able to tell him I loved him the very most."

She touched on Bruley's Queer Eye fame in her post.

"Over the course of sixteen episodes of Queer Eye, in just a few moments on screen, you guys all got a glimpse of the Bru I knew and loved. He was hilarious, stubborn, sometimes inappropriate, and always a sucker for a snack. "He was pure love. It’s been so fun capturing his spirit and sharing more with you all here. I’ve taken a few days to process and grieve and figure out what’s next."

His Queer Eye pals have already started playing tribute to their 4-legged-friend...

Food and wine connoisseur, Antoni Porowski, penned a moving message on his Instagram story, while Bobby Berk wrote: "Breaks my heart. Sorry for your loss love." On Thursday, the official Queer Eye Twitter account released a statement following the passing of Bruley, that read: “RIP to our dear bru bru! Each time we returned to our loft in Kansas City you were always there to greet us and that brought us so much joy. We hope you have an endless supply of treats to munch on."

Sending lots of love to Michelle and the entire Queer Eye family.