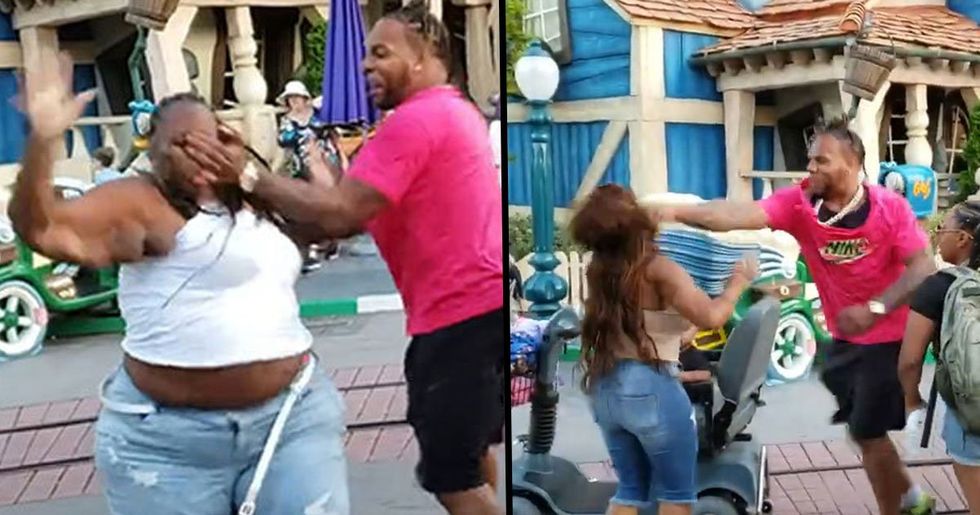 Does anybody remember visiting Disneyland as a kid? Or as a teenager? Or as an adult…?

Disneyland is magical for everyone, no matter what age you are. The characters, the rides, the cotton candy, the music, the magic… nobody can deny that Disneyland is the place of dreams, which would make it the perfect place for a family getaway, right? Wrong.

One family in California’s Disneyland couldn’t wait until they got home to unleash hell on one another, and, instead, decided to inflict it upon the hundreds of other guests who were unfortunate enough to witness the fight.

Keep scrolling to watch the video of the fight and to read about the serious consequences that the family faced...

Walt Disney had a passion for drawing since he was a little boy.

He took art classes alongside his regular schoolwork, and his first job was as a commercial illustrator at the age of eighteen. He set up Disney Brothers Studios with his brother in the 1920s in California, which, very shortly after, saw the creation of Disney’s iconic Mickey Mouse.

Disneyland is the perfect location for family vacations.

Since the opening of Disneyland, it has been renowned for its family-friendly atmosphere and fun-loving attitude towards all visitors, no matter how old. Especially for young children, a visit to Disneyland is a dream come true.

People go to Disney parks expecting an enjoyable and safe day out.

But little did the visitors of California’s original Disneyland know what was in store for them on Saturday last week...

It’s the last place that one would expect to see a fight...

Especially in Mickey’s Toon Town! An onlooker captured the brawl and the video has since gone viral for obvious reasons.

A vicious fight between family members very quickly broke out in the middle of Toon Town.

The family began arguing in the middle of the busy park.

The man in the pink t-shirt, named Avery Robinson, seemed to be the instigator.

The footage begins showing Avery shouting in the face of a woman. Might I mention, ladies and gentlemen, there is a pram containing 2 young children throughout the entirety of the fight, which, I must say, is absolutely disgraceful.

Avery begins punching and lashing out at the woman, which quickly brings on the involvement of another man and woman - even a lady in a mobility chair gets involved, falling to the floor soon after. Strong language is used consistently, with phrases such as “I don’t give a f*ck, b*tch" and “f*ck you," being heard throughout the video.

Not the usual Disneyland vibe…

This type of behavior is not at all what paying visitors will have wanted out of their day spent at Disneyland - especially with their young children being exposed to reckless and violent behavior such as this!

The fight only gets worse…

Despite onlookers shouting to get security, and a member of staff attempting to calm one of the women down, the fight became a brawl, with 4 different family members lashing out at one another. Avery seems to remain the instigator, with the footage catching him punching a woman repeatedly in the face.

The children are visibly distraught throughout the entire thing.

The family involved in the fight seem to completely disregard their children, and make no conscious effort to take them into consideration while they’re violently going at one another. One of the small children is painfully close to being knocked over several times in the video.

Bystanders were forced to intervene…

Avery can be heard shouting “I’m ready to go to jail tonight" repeatedly, began punching one of the women involved until she fell to the ground. Members of the public managed to restrain the man, pulling him away from the woman; he had a handful of her hair. Security from the resort eventually turned up, which seemed to instantly diffuse the situation.

It is extremely worrying that the children in this family will more than likely be subjected to witnessing this kind of behavior on a daily basis if their parents willingly behave like this in public spaces. The children are seen looking distressed and are crying throughout the video, but not once does a member of the family attempt to tend to their children.

The family was soon escorted from the park…

Speaking to People, Sgt. Daron Wyatt stated that everyone involved in the altercation was related. “Everyone can be charged with fighting in public, which is a misdemeanor in California," he explained, despite the investigation still being in very early days.

They could be charged with child endangerment.

None of the family members were arrested on the scene as none of them were being cooperative; they refused to provide any details as to how the fight started. Hopefully, as the investigation progresses, identifications can be made and charges can be filed.

A spokesperson for Disney spoke out.

Speaking to People, Liz Jaeger said: “Any type of violence is inexcusable and will not be tolerated. Those involved were immediately removed from the premises and turned over to the Anaheim Police Department."

It is heartbreaking to see children being forced into these situations.

It's completely unacceptable for parents to behave this way in front of their young children and potentially put them in harm's way.

When you watch the video, you'll get it.

I can't seem to fathom how this family are having a physical fight in the middle of Disneyland!

Since the video went viral, the authorities have had no choice but to get involved.

The brutality of the assault cannot be swept under the rug. Avery Robinson was allegedly hit with multiple felonies for attacking his girlfriend. He's been charged with domestic battery and assault with a deadly weapon.

And the charges don't end there...

Since there were children caught up in the mix, he's also been charged with child abuse and endangerment.

You would think that Avery would have learned his lesson after security escorted him out of the premises...

But he didn't. Instead, he decided that he would try to hit a Disneyland employee with his car and threatened to kill his sister and her husband.

He faces up to 7 years in prison.

I guess that he was right when he said: "I'm ready to go to jail tonight" before attacking one of the ladies. Have fun in there, Avery.

Watch the shocking footage here of the fight here.