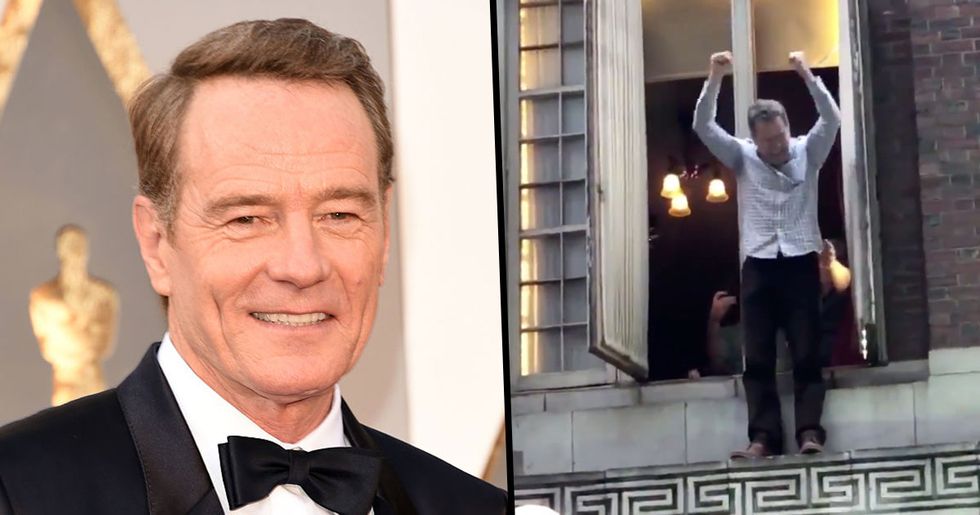 This year Women's March took place on Saturday, 19 January. As every year now since the day Donald Trump became president of the United States, the march drew thousands of people, protesting for justice and equality. The event was also spread out over several cities in both the US and all over the world.

Bryan Cranston also made an unexpected appearance in support of the crowd in the window of a Broadway theater. I'm pretty sure he was only supposed to appear in the window and wave hello to the protesters. But he literally took the gesture one step further, risking his life and most likely pissing off his entire PR team.

He was surely the funniest and most impressive, but definitely not the only, celebrity who participated in the march this past weekend. Meanwhile, Ariana Grande's and Cardi B's song lyrics became the inspiration for the march posters.

Women's March 2019 is the third annual campaign since it began in Washington DC in 2016.

It had great outcomes in its first and second years with millions of people showing up to protest the president's ridiculous and misogynist views, Guacamoley reports.

But in 2019 Women's March is facing a lot of controversy.

Fox News says it started when a former leader of the event alleged she had been kicked out for being Jewish.

One of the present leaders of Women's March, Tamika Mallory, has recently been interviewed on The View.

One of the hosts of the show urged Mallory to admit that Nation of Islam leader Louis Farrakhan's anti-Semitic statements are wrong, Fox News reports. Mallory refused to do so, saying, "That is not my language. It's not the way I speak."

Additionally, Mallory has previously called "the greatest of all time" for his work in black communities.

Sarah Silverman has also expressed her disapproval of Mallory days before the 2019 Women's March, tweeting, "I cannot imagine having such mild feelings over such a furious hatred of an entire people. [Farrakhan] calls us termites. I’m heartbroken but im gonna stay hopeful because I don’t wanna give up on Tamika. (oh wow I s that how SHE feels about LF?) Oh this life…"

However, Mallory also stated on The View that "while she does not agree 'with many of Minister Farrakhan’s statements,' she can still appreciate his efforts on behalf of the black community." People says.

"Everywhere that I go is difficult," Mallory told the co-host. "The Women’s March was very difficult. I met with a lot of women who did not even understand why race was [an] important… part of the conversation as it relates to women’s rights issues."

A month before the 2019 march, actresses Alyssa Milano and Debra Messing announced that they wouldn't participate in the march unless its leaders denounced Farrakhan, Fox News says.

So as a result, New York City had two competing marches take place that Saturday: Mallory's Women's March and the Women's March Alliance that condemns anti-Semitism.

People says the original march lost a lot of sponsors after this.

Democratic National Committee was no longer on the list of official sponsors after the two leaders appeared on The View.

People tried to contact them for more information but it was refused.

Same as with the first two campaigns, the 2019 Women's March in Washington, D.C., was closely observed.

Turns out, this year the march attracted much fewer protesters than before.

We're talking thousands instead of millions. And in all cities across the country instead of just Washington.

Bryan Cranston is best known for his role in Breaking Bad. But he is also concerned with the way that minorities are represented in the popular culture.

Cranston's latest role is a quadriplegic billionaire in the movie The Upside, alongside Kevin Hart, whose character is a recently paroled criminal hired as a carer.

But people claim that by accepting the role Cranston reduces the acting opportunities for people with actual disabilities.

However, he said he was aware of "the need to expand opportunities" and his latest role was a "business decision."

Cranston said, "We live in the world of criticism, if we're willing to get up and try something, we have to also be willing to take criticism. We're very aware of the need to expand the opportunities for people with disabilities."

"I think being cast in this role as a quadriplegic really came down to a business decision."

Cranston says his situation is a classic "case of catch-22."

"I don't know, where does the restriction apply, where is the line for that? I think it is worthy for debate to discuss those issues."

Cranston's latest role started the conversation on the lack of opportunities for minorities and marginalized groups.

Naturally, being concerned with equality and justice for minorities, Cranston appeared in the Women's March to show support for the protesters, Guacamoley reports.

He "climbed out of a window on to a small ledge to cheer the crowds gathered in New York city for the Women’s March 2019."

Photos and videos of Cranston have gone viral on social media.

He was spotted standing outside a window of the Broadway theater, where he was performing a part in the play Network.

I bet this little trick drove his publicist mad.

The 62-year-old actor also shared a video of his own view from the window.

He also wrote on Instagram, "The Women’s March from my balcony at the Belasco Theater in New York!"

"Exciting to witness and support these powerful women of all ages, colors and creeds. Change is coming!"

Other celebrities have also joined the march.

Westworld star Evan Rachel Wood shared a photo with Britton and Michaelson, saying, "Got to hang with these lovelies at the Women's March today."

Another photo she shared was with Back to the Future actress Lea Thompson. It said, "So much love for this bad—s of a woman. BTW we're making fists."

Some celebrities, unfortunately, couldn't make it to the march.

Amy Schumer posted a sonogram photo of her baby who seemed to hold a fist in the air as a show of support. The caption said, "Sending strength to all of the women marching today!! We won't stop cause we can't stop! Even my baby knows it."

Meanwhile, Laura Dern was supposed to speak at the march in Los Angeles but her flight from Paris had been delayed, Fox News reports.

The actress wrote on her Instagram story, "The bad news is we're delayed. The great news is we're on Air France and our pilot is female and globally only three percent of pilots are female. So while you're all marching, thank you so much. We have a lot of work to do so keep marching. Happy Women's March!"

"Sarah Hyland, Marisa Tomei, Lance Bass and Britton, who wore a shirt reading 'Until we’re all equal,' also spoke to the crowds at the L.A. march," People says.

Lots of Ariana Grande and Cardi B fans had posters with their song lyrics held up, Daily Mail reports.

Thank U, Next and God is a Woman seemed to be the most quoted songs.

Some posters were as simple and straightforward as Thank U, Next and God is a Woman.

One woman's poster read, "You Like My Rights, Gee Thanks, I Want Them."

Some included quotes from her Instagram video that has got 15 million views in just four days, Daily Mail reports.

In the video "the Bronx-born rapper [was] speaking about the Government shutdown."

The use of her song lyrics in the march was noticed by Cardi B herself too.

She wrote, "I can’t believe how many posters of me where made at Womens March In DC ! I wish I was there. I’m so honored."