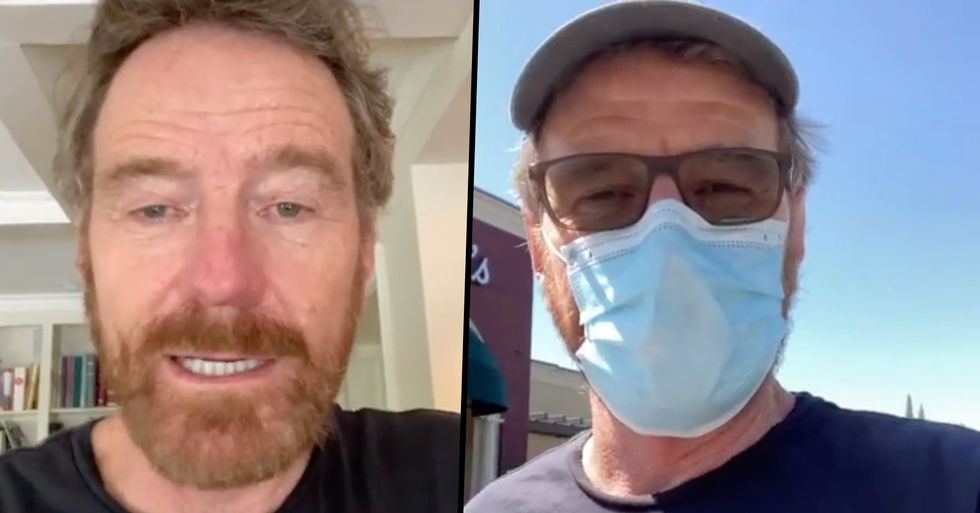 Bryan Cranston, the man after all our hearts, has this week done something incredible for the fight against coronavirus...

This week, Bryan Cranston had a big announcement to make.

The beloved actor took to Instagram to reveal that he had, in fact, been diagnosed with coronavirus.

Okay, before you all start panicking...

Bryan is fine and in very good health.

But he decided to reveal his diagnosis for one reason...

Since his recovery, the sixty-four-year-old actor has decided to give a little back, and it has made us love him even more than we did before.

Now, most of us fell in love with Bryan when he made his big break as the goofy Hal in Malcolm in the Middle.

But there is one role of his that stands out amongst the rest.

Bryan's fame skyrocketed when he landed the role of Walter White in the hit series, Breaking Bad.

Initially, people were hesitant as to whether he could pull off the role.

Lovable and comedic dad to hardened drug lord... It was going to be quite the challenge, to say the least.

But, much to our delight...

His portrayal of the chemistry teacher-turned-drug lord was nothing short of spectacular.

Bryan was widely celebrated for his performance...

And went on to win 3 consecutive Emmy Awards for Outstanding Lead Actor in a Drama Series.

Since his Breaking Bad success, the actor has remained relatively under the radar...

And has only starred in a handful of other projects, such as the 2015 biopic, Trumbo, and 2016's The Infiltrator.

But, in the last few months especially...

The actor has remained mostly out of the public eye and has rarely posted on his social media platforms.

He has given us the odd update throughout the coronavirus pandemic...

In June, the actor posted a video of himself strolling around the supermarket shopping for his and Aaron Paul's mezcal brand, Dos Hombres.

But his latest update had fans feeling a little concerned...

Because he revealed that he had, in fact, being diagnosed with coronavirus at some stage in the pandemic.

In the 2-minute-long IG TV video, Bryan can be seen wearing shades and a protective face mask as he says firmly:

"Hello everybody. I want to announce that I had COVID-19."

He stressed that he was very lucky and had only mild symptoms...

Which included a slight headache, tightness of chest, and a loss of all taste and smell. But this had made him wonder, "maybe there's something I can do?"

He then revealed that he had signed up to a program at the UCLA Blood and Platelet center...

Where he would be donating his plasma to contribute towards finding a cure.

He filmed himself sat at the chair giving blood...

And explained: "I am donating my plasma with COVID-19 antibodies. This will help people recover faster and be used in scientific research studies about this virus."

Bryan seemed to be in great spirits...

And chatted jollily with the nurse administering his blood.

In the video, he also took the time to remind people to remain vigilant...

And to be patient as the pandemic runs it's course.

Of course, he makes the full video very entertaining, too.

You can watch the full thing above.

And, amazingly, he isn't the only actor to have done such a selfless deed. Keep scrolling to find out which other famous figure donated his blood towards the fight against COVID-19...