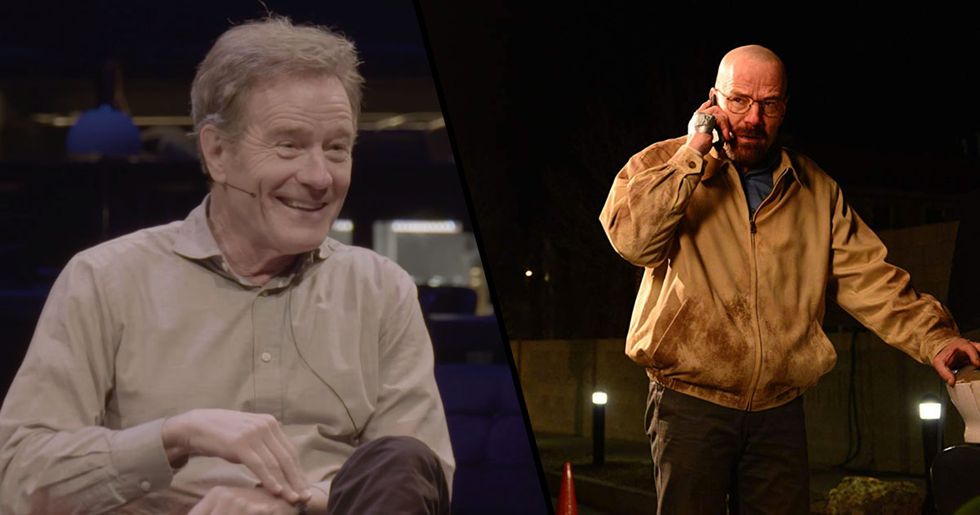 Bryan Cranston has been teasing that we haven't seen the last of his Breaking Bad character, Walter White.

This is music to the ears of Breaking Bad fans that are just dying to see more of the meth-cooking science teacher.

But will Cranston be playing Walter White again anytime soon?

Here's everything we know...

But we all watched Walt die in the final episode.

Sorry spoilers! But if you haven't watched the final episode of Breaking Bad, which aired on September, 29th 2013, then more fool you.

People are craving more Breaking Bad spin-offs. Besides, El Capino focussed on what happened to Jesse Pinkeman. As much as we all love Aaron Paul, now everyone's asking, well what about Walt?

Everyone wants to know what happened to Skyler.

At the end of Breaking Bad, Walter White had left quite the mess for his wife, Skyler to contend with.

Walter White's family got embroiled in his meth cooking mess.

By the final episode, their future seemed uncertain... I mean they did have to live with being known as the family of the notorious Heisenberg, but Walt Jr. was also going to get the millions of dollars off the grey matter couple as soon as he turned eighteen. So swings and roundabouts, eh?

Better Call Saul gave us a chance to catch up with some characters.

The spin-off, Better Call Saul, which is essentially, the origin story of White's lawyer, Saul Goodman has been successful in its own right.

We got to catch up with Mike.

Despite being killed by Walter in the final season of Breaking Bad, we were able to catch up with Mike in the prequel series, Better Call Saul.

I guess no-one could get enough of that spicy fried chicken. Of course, Saul was involved with Gus before any of them met Walter White so it made sense that he came up in the Better Call Saul timeline.

Which is why everyone's wondering whether Bryan Cranston will be coming back to our screens.

Walter White was an integral moment in Saul's story.

So will he be back? Cranston spoke to EW about his return, saying: "I know that [Better Call Saul co-creator] Vince and [co-creator] Peter Gould, who runs the show, is so protective of their characters and their story that they don’t want to do something that feels like a stunt."

Give the fans that they want!

It's clear that there will be plenty of disappointed fans if the writers of Better Call Saul ignore the whole Saul/ Walter White relationship.

Except, maybe that epic pizza on top of the roof scene. I could watch that over and over...

Cranston made it clear that he wouldn't be working with Paul again anytime soon.

Bryan Cranston insisted that although the pair loved working with each other, for the sake of their respective careers they need to move on. Cranston was very clear on this, saying: "We can’t work together. I think it would be a mistake for us to act together again in something so soon."

But everyone forgot about Hal as soon as Breaking Bad hit.

Before Breaking Bad, Bryan Cranston starred as Hal, in Malcolm In The Middle.  The role made Cranston a household name and after playing Malcolm's dad for six- ears you would think people would have found it hard seeing Cranston as anyone else.

The hit show ended in 2006 after filming an impressive 151 episodes. If anyone had said that Cranston would go on to play a meth cook, that was feared all across America and Mexico, back then I'm not sure anyone would have believed it.

Although there was some similarities between the characters...

Both Hal and Walter had a signature look of wearing off-white y-fronts. Perhaps that was something Cranston brought to the writers' room...

The trouble with making a sequel or prequel though...

is that things change. Take El Capino for instance. That movie began from right where we had left off in the final episode of Breaking Bad. The narrative also consisted of Pinkman's flashbacks to when he had been held captive by Todd and his uncles. There was one problem though...

Todd had grown up.

The actor that played Todd in Breaking Bad, Jesse Plemons, had aged quite a bit since they had last been filming. This meant that although we were supposed to be seeing flashbacks from the time we had last seen Todd in Breaking Bad, he looked a lot different. If we are to see more of Walter White, they're going have to act fast before Cranston gets real old.

That is of course unless they use clever trickery...

I don’t know why filming takes so long, I became Walter White in less than a minute. Thanks to: Cheri Montesanto:… https://t.co/nyq4B3EgAj
— Bryan Cranston (@Bryan Cranston)1571674598.0

Yesterday Cranston posted a video on Twitter of himself getting kitted out in his Walter White look. It turns out, quite a lot of work goes into getting Bryan Cranston to look exactly as we remember Mr. White. But why was he getting dressed as his Breaking Bad character?

Since Cranston posted himself in make-up, fans have become certain that he will be featured in Better Call Saul.

Nothing has been confirmed...

Cranston did say that if he was going to feature in Better Call Saul, "It would [have to be] very soon according to the storyline that I would show up as Walt. If it happens, it happens. If it doesn’t, I’m okay."

Everyone's rooting for you Bryan!

I mean, come on Vince Vaughn... give the people what they want. Feel as though you need a Breaking Bad recap? Well, continue scrolling to watch Aaron Paul recap the entire thing in two minutes. It really is quite impressive.