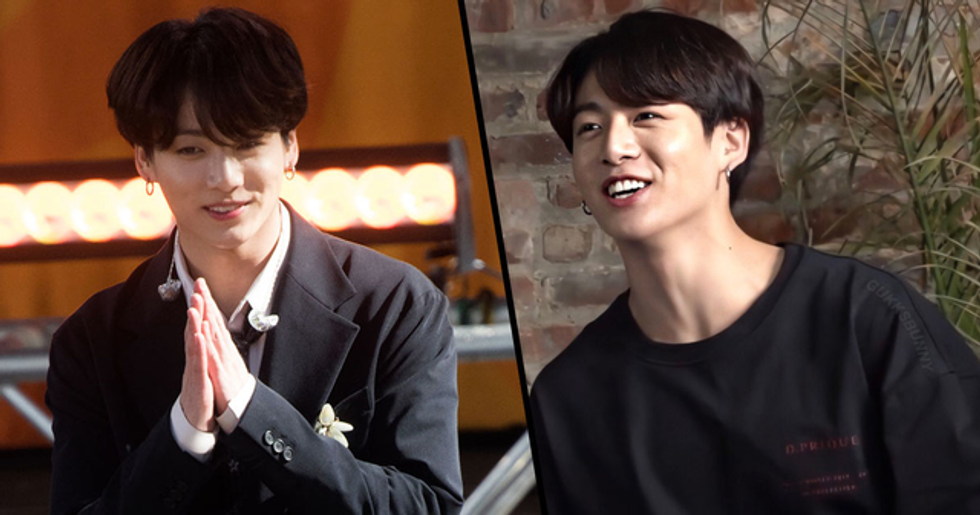 If you type "Jungkook" into Twitter, you may notice something a little bizarre... Your feed will be flooded with loving and appreciative posts by mildly obsessed fans.

For a little bit of context, Jungkook, who is a member of the much-loved Korean Pop band, BTS, was recently in a car accident, and his alarmingly loyal fanbase are currently doing their very best to cover it up.

In an attempt to shield the car accident, which was actually Jungkook's fault, fans are sharing the same clip of him over and over again with various captions on how cute he is, or on how much they love him. It's a strange one, I know.

But, funnily enough, there is an explanation behind it all. Keep scrolling for the full story...

And that, ladies and gentlemen, is K-Pop.

K-Pop has taken the country by storm...

Standing for "Korean Pop", this particular genre dominates the Korean music scene, with locals choosing to listen to next to nothing else.

And because of this...

K-Pop music fans can be a little... Intense, to say the least.

Image is everything in the world of K-Pop.

And, therefore, famous K-Pop stars are never seen in any form of negativity or scrutiny - They are instead continuously praised and unconditionally loved by their fanbase.

So when a famous K-Pop star was involved in a car accident this week...

The ever-so-loyal, somewhat obsessive K-Pop fan base went out of their way to make sure nothing at nothing negative came out about the musician even though he was involved in the scandal.

The star in question is Jungkook.

The twenty-two-year-old singer has become one of the most recognizable stars across South Korea after joining the K-Pop group, BTS.

BTS is one of the biggest names in K-Pop.

BTS is a K-pop group made up of 7 members - Jin, Suga, J-Hope, RM, Jimin, V and Jungkook - who come from different parts of South Korea.

And have since rocketed to stardom, becoming one of Korea's biggest and most famous K-Pop bands.

And they've even achieved global fame...

Yes, even here in the States, we have all jumped on board the BTS bandwagon. I mean, come on, it's pretty hard not to!

So, when their lead singer crashed his car a few days ago...

Their colossal fan base hastily got to work by covering any evidence of the accident, cushioning JK's global image.

Just how serious was this accident?

Big Hit Entertainment, BTS’s management company, released a statement saying that the “minor collision" was the singer’s “own mistake", and that neither driver sustained any injuries.

The statement continued: “The scene of the accident was resolved and police questioning was completed according to the due process, and an amicable settlement was made with the victim afterward."

So the whole thing wasn't really a big deal... Or was it?

Well, according to BTS fans, it was an incredibly big deal and needs to be covered up immediately.  Jungkook's image is very important. And you know what, he is known to be kind, considerate and overall, a very good guy, but he's allowed to make mistakes.

Hardcore BTS fans are trying to suppress the news trending on social media...

Well THIS is a problem, Jungkook a member of BTS caused a car accident and now his fans are spamming key words with… https://t.co/XGXfAyhknB
— Kavos (@Kavos)1572846237.0

By attempting to flood the "Jungkook" search results with only positive news about him.

Fans have been consistently sharing the same video of Jungkook...

Which shows him making fellow bandmate, Jimin, fall from his chair with laughter. Jungkook then goes to help him up, and falls to the floor himself, in an incredibly staged manner.

But the fans love it.

And they have been incessantly sharing the clip with various captions that praise and compliment the singer.

There is no mention of his car accident.

Not even a sniff of it, which is weird because it was trending news a couple of days ago.

It's a peculiar situation, but there is an explanation for it all.

taehyung made jk laugh so hard that you can still hear jungkook's laugh even after tae's turn was over, pls my weak… https://t.co/anZlAbqXyy
— taekook🐾≮ (@taekook🐾≮)1572958915.0

Holly Smith, a K-pop journalist formerly of the UnitedKpop website, explained: “The ARMY [BTS’s fans] can be intense. They feel like it’s their responsibility to put out the fires, or even stop them from beginning in the first place." That's a lot of pressure.

The fans clearly feel some form of responsibility toward the musicians.

“I don’t think the type of thing where fans try to downplay something as being unique to K-pop," adds Emma, a K-pop expert. “You see this behavior in a lot of different fandoms, but I do think K-pop fans take it to an extreme."

Fans will go to pretty much any lengths to distract people from any form of negative news...

Even if they just share 4 different angles of Jungkook's neck. You have to admire the dedication, right? We're just glad Jungkook and the other driver involved in the collision are okay. That's all that matters to us.