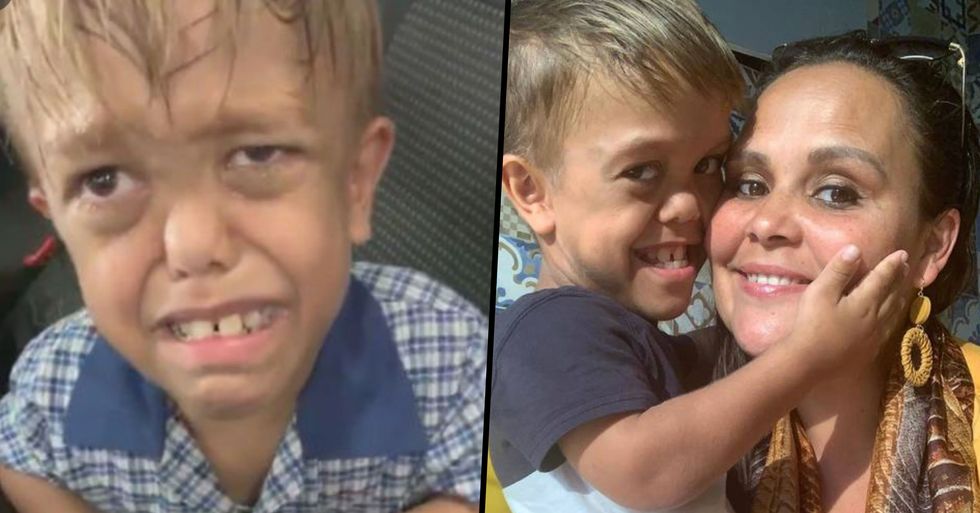 Just when we thought Quaden Bayles had found the peace he deserves...

Earlier this year, the entire world was captivated by the story of Quaden Bayles.

The youngster who went viral for being bullied at school caused a lot of controversy with rumors surrounding his age and financial situation - which led him to address these rumors himself.

Regardless, the schoolboy received floods of support from people all around the world...

And even numerous famous faces reached out to him to try and make him feel better after years of relentless bullying.

But several months on, it turns out that things haven't gotten better for Quaden...

Because his mom has confirmed he still gets "relentlessly trolled" by people online.

Now, we all remember when Quaden's story first went viral back in February.

Yarraka Bayles, who is from Brisbane, Australia, posted a video where she showed the aftermath of a bullying incident that took place at her son's school.

In the 6-minute clip, you can see 9-year-old Quaden, who has dwarfism, crying and talking about his school experiences, saying he's considered "the dumbest kid in class."

His heartbroken mom said this:

"We try to be as strong as positive as possible and only share the highlights... but this is how bullying affects a [...] kid... I just picked my son up from school, witnessed a bullying episode, rang the principal and I want people to know this is the effect bullying has. This is what bullying does. So can you please educate your children, your families, your friends because all it takes is one more instance... and you wonder why kids are killing themselves."

The video has since been viewed over twenty million times, and the surge of support has been overwhelming for the family.

And many celebrities and sports stars alike were amongst those offering their support.

Tributes from celebs all over the world also began pouring in.

The generosity was astounding.

The youngster wanted to give some helpful advice to anyone else who might be sharing the same experiences as he did when the video was taken and he began speaking to local media.

This is what he said in his first interview...

But, despite all the love, a sick rumor was spread around the internet...

For some reason, people started claiming that Quaden was actually a rich and famous eighteen-year-old, who was just doing this for even more fame and money.

People thought his mom was in on it...

Many believed that the family was trying to exploit the kind hearts of the public - and "He's eighteen" even became the most top trending search on Twitter, along with some suspicious photographs of the youngster wearing designer clothes and posing with wads of cash... which are questionable, we must say.

Because we certainly don't! And it did pose the question as to whether Quaden is as young as his family has made out.

People claimed they had proof he was eighteen...

What can be more evidential than a passport?

Since Quaden's post, the heat has certainly cooled on the Bayles family...

And they have been keeping things fairly low-key on social media during the pandemic.

Quaden and his family now have a global fan base...

But it seems that sadly, this isn't enough to stop the trolls.

Yarraka spoke publicly to the Disability Royal Commission on Monday...

And she decided to explain how Quaden and her family are still the targets of vicious trolls online.

She stated that they still receive hateful messages "still to this day, every day."

She then stated that there are still people online out who "think it’s their business to make comments... lots of death threats... physical harm against my children, my granddaughter."

The mom was simply desperate for support.

"I honestly feel like it took for a viral video for us to be able to get the support we need. It just felt like there was not enough being done, so I just stopped complaining," Yarraka said. "I felt like I was being more of a burden or, you know, they’re looking at us like we’re a couple of sooks, and we should just get on with it, and not complain, or report any of these incidents."

We hope that Quaden and his family get the peace they deserve soon.

For more on the subject, keep on reading to check out the top model who was bullied at school for his disfigured nose...