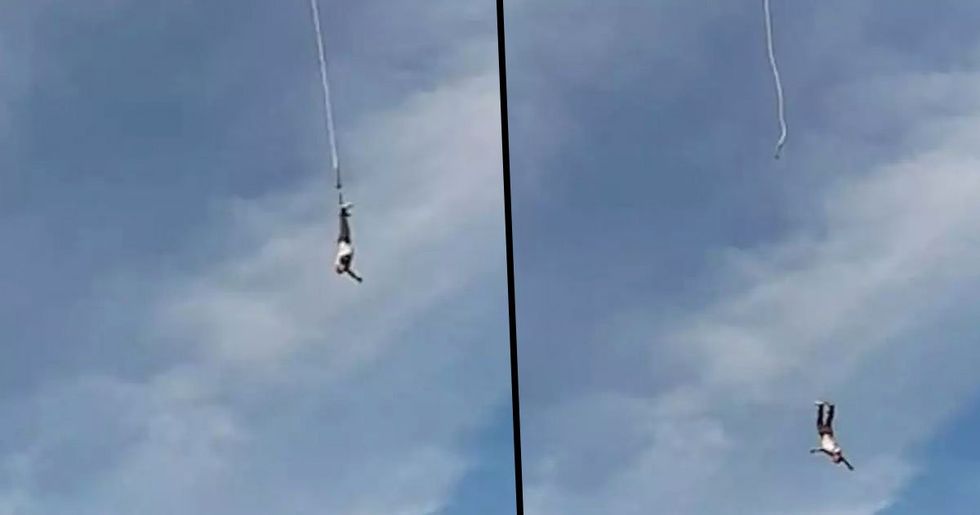 The thought of free falling hundreds of feet in the air and plummeting towards the ground with just a rope holding onto your dear life is horrifying to most.

Despite the adrenaline-inducing activity being promoted as super safe, things can go wrong - and recent footage has emerged of the most terrfying thing that could possibly happen to a bungee jumper.

Keep scrolling to see the video and to hear the full story.

Calling all adrenaline junkies out there...

It's safe to say that bungee jumping is probably one of the most extreme activities in the world.

Bungee jumping goes back to the 1970s.

Members of the Oxford University Dangerous Sports Club began testing the sport out and even conducted jumps from the Golden Gate Bridge in San Francisco, which helped the sport to gain popularity worldwide.

It is a popular thrill-seeking sport.

And millions around the world enjoy facing their greatest fear, experiencing the thrill of a lifetime.

Of course, bungee jumping has its risks...

The risk of obtaining mild to severe neck, spine, or eye injuries is always going to be there. Your body is freefalling at highly intense speeds, and the tug of the rope that's holding onto you can send a lot of force and shock through the body.

But this doesn't seem to put people off!

The risk involved in the activity is often the factor that spurs people to go ahead and face their fear of heights.

What's the worst that could happen?

That's probably what the majority of bungee jumpers think when they're about to take that fateful step off the platform, but the worst really did happen recently for one man.

Footage has emerged from Sunday of last week in Gdynia, Poland, that shows an unidentified man ready to take his first bungee jump.

The man was bungee-ing from a crane.

The crane is seen to elevate the thirty-nine-year-old high into the air until it reaches around 300ft. Underneath the crane is what appears to be a large inflatable pillow.

Many bungee jumping companies use airbags at the bottom of the jump space to increase safety in case of an accident. These are secured in a spot wherein the participant can safely fall upon them, and they will ultimately break a heavy fall.

The man seems to fearlessly fall from the crane and begins hurtling towards the ground in a matter of seconds. But something wasn't quite right. The man's harness came loose and he completely detached from the rope that was holding him up.

The man is seen to plummet, unharnessed, to the ground...

The shocking footage shows the man's body slam onto the airbag and very quickly bounce straight off it, onto the ground.

The footage is horrifying...

It shows people who were watching from the ground stand for a moment in shock, then quickly run to the man's aid.

He was very quickly rushed to hospital, and it was reported that he was conscious throughout the entire ordeal.

He didn't come off lightly from the accident...

According to reports, the man is said to have suffered from a fractured spine as well as several injuries to numerous internal organs. Even though his spine was broken, his spinal cord wasn't, which means he hopefully won't suffer from lifelong injuries and will make a recovery.

Bungeeclub spoke out over the incident.

Bungeeclub is the organization that runs the bungee jumps, and a spokesperson claims that the man was in "good condition" when they left him at the hospital.

The company seemed to think that the man was absolutely fine...

Bungeeclub wrote a post on Facebook, and, translated to English, it read: "The most important - the health of the participant of the unfortunate jump is no serious danger. He didn't break his spine!! After a medical examination at the emergency room, he was considered good."

The company bid thanks to the airbags for preventing a tragedy.

"All equipment used by our company has all the required certificates. Jumps are carried out by qualified and experienced instructors according to all procedures," it went on to read. "As the only bungee jumping company in Poland, we use professional skokochronu - so-called 'Pillows.' And it was because of this and our foresightedness that there was no tragedy."

"We would like to inform you that when our instructor left the ER at night, the condition of the jumper was good."

Staff and witnesses were interviewed by local police.

Krzysztof Kuśmierczyk, from the Gdynia police, told local news that officers had attended the scene and interviewed staff and witnesses, but it is unknown as to whether any legal action will be taken against Bungeeclub.

Watch the video here - but a word of warning: some viewers may find the footage disturbing.

This doesn't mean that bungee jumping has to be ruled out completely, but, if you're going to do it, ensure that the company that you go with has full safety procedures in check in order for you to have the best experience possible. I must admit, I'm guilty of being one of those thrill-seekers who will stand in a 3-hour queue for ninety seconds of intense, adrenaline-spiking fun. But recent events at a theme park in India have made me doubt whether I'll ever let myself be strapped into a rollercoaster again. Keep scrolling to learn of the terrible tragedy that unfolded at the hands of a careless theme park and to see the video of the accident (warning: it's not for the faint of heart).