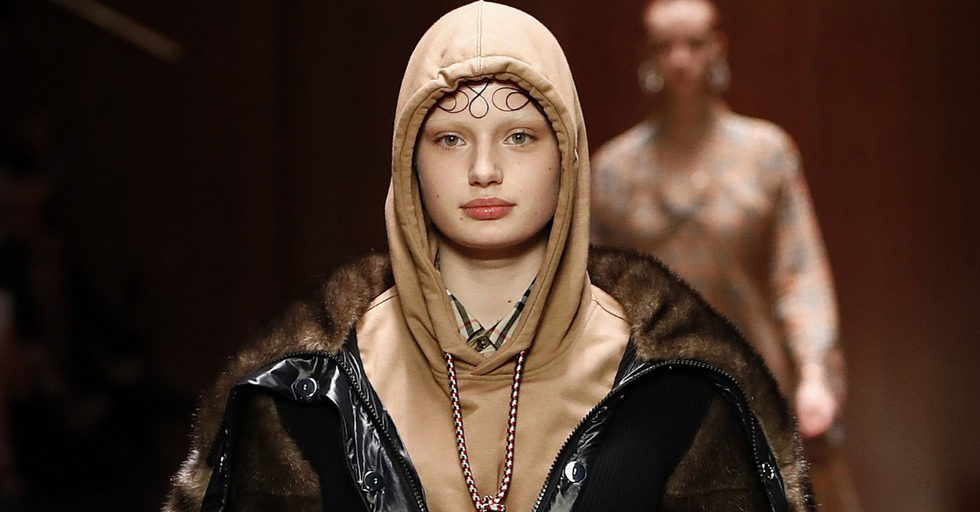 People always say that fashion is meant to make a statement. However, fashion just made the complete wrong statement, and people are up in arms over it.

Multiple fashion snafus went so far as to gain media attention recently. This latest is over a Burberry hoodie that made its debut at London Fashion Week. Because for some reason, this hoodie featured a noose around its neck. Naturally, the sight of a sweater that romanticizes suicide is upsetting lots of people.

That includes one of the models who took part in the fashion week. As she puts it, the staff totally ignored her objections over the hoodie. So now, Burberry is in full apology mode, trying to please their customers and the watchful eyes of the fashion industry. Check out the full story behind this disappointing fashion faux-pas!

Burberry has come under fire for an unfortunate fashion decision.

One article of clothing, a hoodie, featured a noose wrapped around the neck of the garment as it was shown off during London Fashion Week.

One of the models was extremely uncomfortable after seeing the sweater.

Model Liz Kennedy took to her Instagram and posted about the offending item, after which a viral wave of criticism put pressure on Burberry.

The brand has already removed the hoodie from its collection.

"We are deeply sorry for the distress caused by one of the products that featured in our A/W 2019 runway collection," Marco Gobbetti, Burberry's chief executive officer, told CNN.

Liz Kennedy's objections were ignored during the show.

And because of this, she put her thoughts online. Suicide is not fashion. It is not glamorous nor edgy and since this show is dedicated to the youth expressing their voice, here I go. Riccardo Tisci and everyone at Burberry, it is beyond me how you could let a look resembling a noose hanging from a neck out on the runway. -liz.kennedy_

But her objections are resonating deeply with the many people who agree that Burberry made a huge mistake.

How could anyone overlook this and think it would be okay to do this especially in a line dedicated to young girls and youth. The impressionable youth. Not to mention the rising suicide rates world wide. Let’s not forget about the horrifying history of lynching either. There are hundreds of ways to tie a rope and they chose to tie it like a noose completely ignoring the fact that it was hanging around a neck. -liz.kennedy_

It does make you wonder about Burberry's decision-making.

How many people looked at that hoodie and thought, "Yep, that's classy as heck and ready for Fashion Week"? Kennedy also questioned this. A massive brand like Burberry who is typically considered commercial and classy should not have overlooked such an obvious resemblance. -liz.kennedy_

It was especially rough on Kennedy.

I left my fitting extremely triggered after seeing this look (even though I did not wear it myself). Feeling as though I was right back where I was when I was going through an experience with suicide in my family. -liz.kennedy_ So many people, including Kennedy, struggle with experiences like this. And they really shouldn't have to be reminded of it because of a designer hoodie.

So, yeah, there's something wrong at Burberry:

Also to add in they briefly hung one from the ceiling (trying to figure out the knot) and were laughing about it in the dressing room. -liz.kennedy_

When she tried to speak with someone, Kennedy was rudely rebuffed.

I had asked to speak to someone about it but the only thing I was told to do was to write a letter. I had a brief conversation with someone but all that it entailed was “it’s fashion. Nobody cares about what’s going on in your personal life so just keep it to yourself." -liz.kennedy_

We all know how well telling someone to basically shut up works.

And so does Kennedy: Well I’m sorry but this is an issue bigger than myself. The issue is not about me being upset, there is a bigger picture here of what fashion turns a blind eye to or does to gain publicity. A look so ignorantly put together and a situation so poorly handled. -liz.kennedy_

I am ashamed to have been apart of the show. #burberry. I did not post this to disrespect the designer or the brand but to simply express an issue I feel very passionate about. -liz.kennedy_

The hoodie debuted last Sunday in London, as part of Burberry's Autumn/Winter collection.

We applaud her tenacity!

She stood up to a fashion tycoon because she saw a wrong that needed to be addressed. Thank you, Liz!

According to Burberry, the design's inspiration came from somewhere totally innocent:

"Though the design was inspired by the marine theme that ran throughout the collection, it was insensitive and we made a mistake," Gobbetti added.

Marine or no, that rope is undoubtedly tied like a noose.

So it's a good thing that critics quickly picked up on Kennedy's Instagram post, and spread it across the internet.

Gobbetti has also reached out to Kennedy.

When he spoke to CNN, Gobbetti also said that he called Kennedy to apologize after he was made aware of the situation.

But other organizations are calling for more thorough examinations from designers.

One such organization was the UK's Mental Health Foundation. They said that such an incident clearly indicates the need for a more thoughtful creative process.

And they've got a point.

"It is disappointing to see this representation in our day and age considering how much ground we have covered in mental health in recent years," said Antonis Kousoulis, the charity's associate director of research.

At least the sweater won't be going on sale racks.

"I was glad to hear that the fashion house apologized and pulled the item, but, more generally, I would like to see more diversity in the creative process," Kousoulis added.

People with influence need to be thoughtful about how they wield it.

Kousoulis continued, saying: "Highly influential global brands like Burberry certainly have a role to play in giving a voice to diverse views, respecting people with lived experience, and being role models."

Other celebrities have weighed in with their thoughts.

Like Wanda Sykes, who brought up the point that this is all happening during Black History Months, of all times.

There have been a disappointing number of disrespectful fashion brand products – we're just days behind the Gucci controversy over the brand's sweater than resembles blackface!

It's been kind of a rough year.

It seems like just one gaffe after the other...

Maybe it's all a competition.

Exactly: it raises the question of where, exactly, designers in the fashion world are getting this insensitivity from.

Maybe something's off in the hiring practices?

Yeah, maybe take a closer look at Burberry's decision-makers to find out how this sweater was allowed to exist.

The show's designer has also apologized.

Burberry's chief creative officer, Riccardo Tisci, said: "I am so deeply sorry for the distress that has been caused as a result of one of the pieces in my show on Sunday."

According to Tisci, this was a one-time incident.

"While the design was inspired by a nautical theme, I realize that it was insensitive. It was never my intention to upset anyone. It does not reflect my values nor Burberry's and we have removed it from the collection. I will make sure that this does not happen again," he added.

Burberry seems determined to learn from its mistakes, and hopefully, they will follow through on that.

There's a difference between 'avant-garde' and taking things too far.

So, whichever fashion designers are taking their clothes way too far...they'd better learn from their mistakes, or let a less-offensive designer take over! And share news of this gaffe with your fashion-savvy friends!