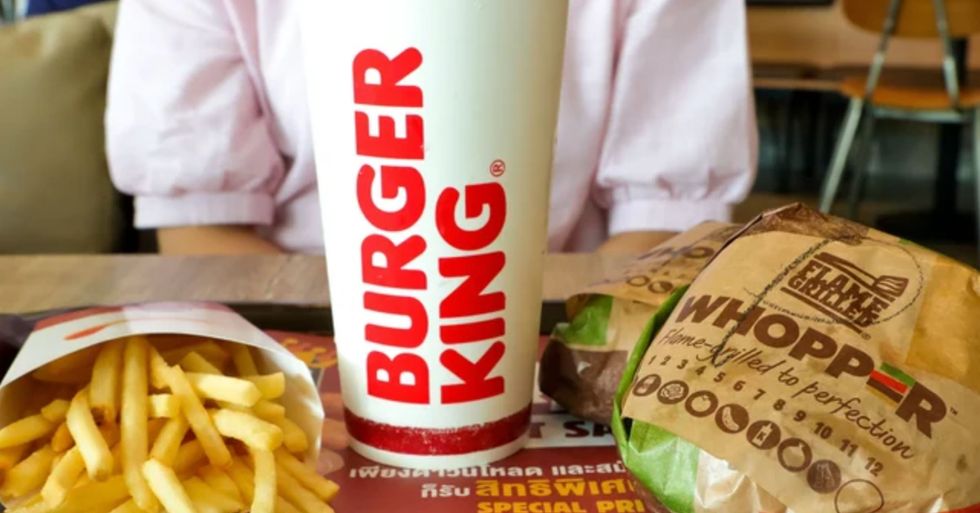 Burger King Shares How to Make a Whopper at Home

The delicious and un-nutritious Whopper from Burger King has always been a staple favorite at the iconic fast-food restaurant.

You can always have it your way - even if you're a vegan!

And now, during these difficult times, you can now make your very own Whopper at home.

Keep scrolling to learn how...

It's the King of all burgers...

All across the world, Whoppers are recognized as one of the most beloved burgers and they have been for quite some time.

From Whoppers to their delicious, crispy fries, and even their crispy chicken sandwiches, there's no wonder why it's one of the top fast-food chains in America.

But they really aren't the most veggie-friendly place.

Which isn't too great...

How are vegetarians and vegans supposed to eat fast food? They are forced to skip out on some of the wonders of life simply because fast food restaurants cannot provide for their needs.

But have you heard of the Impossible?

Impossible Foods exists to make plant-based products that still have that wonderful meaty taste. They've rolled out some amazing options like burgers and empanadas that are purely made from plants.

They've got a pretty solid mission.

"For all the mouthwatering flavor and only a tiny fraction of the environmental impact of meat from cows. Eat up. Save Earth," their website boldly proclaims. It's a vegan startup that we can absolutely get behind.

They pride themselves on their flame-broiled burgers and show clear loyalty and favoritism to their prized Whopper.

But Burger King is opening up to new ideas...

Last year, Burger King made the incredible announcement that they will be teaming up with Impossible Foods to create the best vegan burger - the vegan Whopper.

Shoutout to the vegan pioneers!

People are really supportive of the Impossible Whopper and are encouraging everyone to try it, even if you're not a vegan.

So whether its meat or plant-based...

We can all now agree that the Whopper is the King of all burgers.

But in the current climate...

We no longer have access to our favorite fast-food joints.

The COVID-19 pandemic has lead to restaurants all around the world to shut their doors for the foreseeable future...

And that includes Burger King.

This certainly means no more Whoppers for us...

Earlier this week, the official Twitter page for Burger King France released the exact ingredients for a Whopper...

And it's safe to say that we are intrigued.

Everything can be found at your local supermarket...

Even though the instructions are in French...

You can either hit "translate" or just figure it out for yourselves... and many people have already given it a go!

Of course, you can get creative.

This Twitter user added bacon and cheddar cheese to his Whopper and it looks pretty tasty!

We're just hungry looking at this...

And it turns out that making your own Whopper really isn't as difficult as it seems.

Make sure to keep scrolling to learn about why Burger King are currently giving away free kids meals...