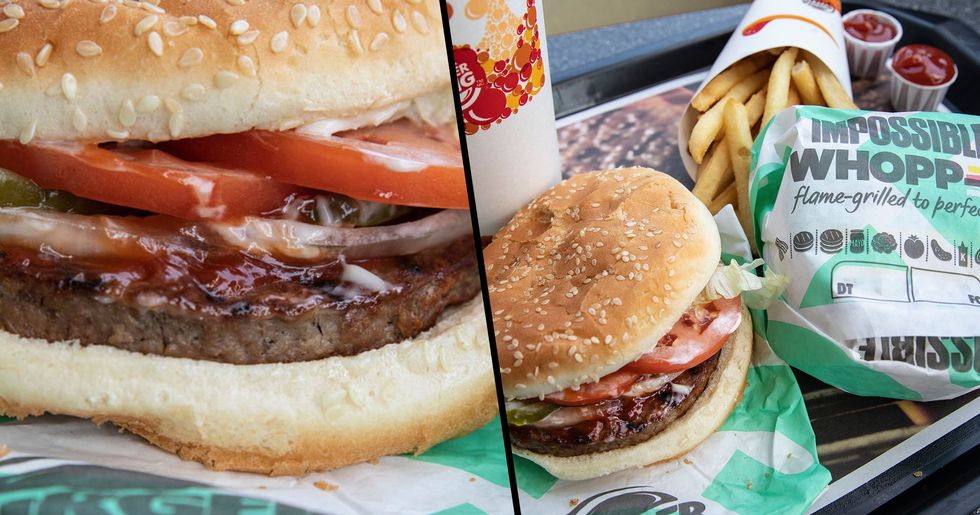 The delicious and un-nutritious Whopper from Burger King has always been a staple favorite at the iconic fast-food restaurant. You can always have it your way - unless you are a vegetarian, then you are basically confined to a salad and that's really about it.

Vegans and vegetarians rejoiced when Burger King announced a new meatless Whopper for its customers. The burger is called the Impossible Whopper and people really can't believe that it's not made from meat because it's that good.

However, there seems to be trouble in paradise... Keep scrolling to learn more.

It's the king of all burgers...

All across the world, Whoppers are recognized as one of the most beloved burgers and they have been for quite some time.

From Whoppers to their delicious, crispy fries, and even their crispy chicken sandwiches, there's no wonder why it's one of the top fast-food chains in America.

But they really aren't the most veggie-friendly place.

Which isn't too great...

How are vegetarians and vegans supposed to eat fast food? They are forced to skip out on some of the wonders of life simply because fast food restaurants cannot provide for their needs.

But have you heard of the Impossible?

Impossible Foods exists to make plant-based products that still have that wonderful meaty taste. They've rolled out some amazing options like burgers and empanadas that are purely made from plants.

They've got a pretty solid mission.

"For all the mouthwatering flavor and only a tiny fraction of the environmental impact of meat from cows. Eat up. Save Earth," their website boldly proclaims. It's a vegan startup that we can absolutely get behind.

They pride themselves on their flame-broiled burgers and show clear loyalty and favoritism to their prized Whopper.

But Burger King is opening up to new ideas.

On April 1st of this year, Burger King announced they will be partnering with Impossible Foods to create a meatless Whopper that they will call the Impossible Whopper.

All of the flavor, none of the meat.

This plant-based patty is replacing the beef patty in the beloved Whopper; they are saying it's "100% Whopper, 0% Beef." That's a slogan we like!

It's a pretty big deal!

A big-named fast-food company proudly selling a vegetarian burger feels like the good news we needed to hear.

But there's so much at stake...

For Burger King to partner with Impossible Foods was a pretty big risk, especially since a lot of their customers come in for their flame-grilled beef burgers.

Yet it's a risk BK are willing to take.

Pat Brown, CEO of Impossible Foods, is excited about the partnership. "The fact that Burger King...has chosen not just to serve the Impossible Burger but to serve it as the Impossible Whopper... I think is a huge endorsement," Brown said in an interview.

Shoutout to the vegan pioneers!

People are really supportive of the Impossible Whopper and are encouraging everyone to try it, even if you're not a vegan.

They aren't the first, but they hopefully won't be the last.

Burger King is not the first fast-food restaurant to serve vegetarian options, and it seems that the vegetarian/vegan diet is on the rise.

The Impossible Whopper has been doing very well...

People cannot get enough of this plant-based beauty, but it seems that there is trouble in paradise...

A group of vegans aren't happy with the fast-food giant...

A man named Phillip Williams, who is a vegan, is going ahead with suing Burger King due to the fast-food chain cooking the Impossible Whopper on the same grill as the meat patties.

He has just filed a class-action lawsuit...

And he claimed that because of the meat residue on the grill, the Impossible Whoppers aren't entirely vegan.

Williams bought the burger in question in an Atlanta restaurant.

The lawsuit says Burger King has no disclosures on its menu that would notify a consumer prior to the purchase of the Impossible Whopper that it was cooked in a manner that would result in meat by-products on the burger.

He isn't the only angry vegan, apparently...

He notes there have been numerous complaints posted online by outraged vegans.

Williams not only wants damages ...

He wants the judge to order Burger King to stop cooking Impossible Burgers and the OG burgers on the same grill.

Williams and his fellow vegans aren't being sympathized with, however.

Many have been defending Burger King and the way in which they cook their burgers.

"Burger King made it clear that they would be cooking the Impossible product on the SAME grill. Therefore, cross-contamination is inevitable! I don't eat meat myself so I read up before going," one person wrote online in their defense.

Some vegans are embarrassed by Williams' actions...

"I being vegan know that I may be coming into contact with non-vegan items when going to a fast-food chain. Also, it never once says it’s vegan. It says it’s a meatless pattie. And that’s what the meatless pattie is! Get the F over yourselves. You're making us Vegans look bad," one woman wrote.

So in the meantime, keep scrolling to learn about the furious vegan who was given a real cheese pizza instead of a vegan alternative...