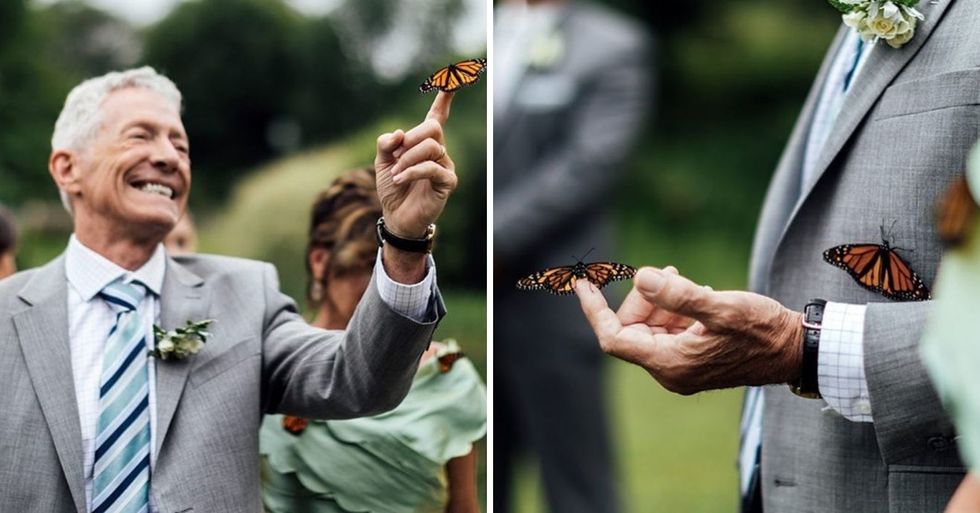 Losing someone is one of the hardest things that we can go through, but, often, there can be little moments of hope that pull us through. And one family recently experienced the most heartbreaking, yet beautiful, moment during a tribute to a young lady who sadly passed away.

In 2014, Vanessa Van Gorder tragically died in a car crash and never got to see her brother walk down the aisle... not in the flesh, anyway.

During a tribute to her during the service, the most amazing thing happened, and it all started with some butterflies.

The best thing? The incredible tribute was captured in a series of photos.

Just wait until you see how beautiful they are...

Ever found yourself in awe of butterflies?

We often admire their colorful and detailed wings. But they're not just known for their wings...

The creatures have a much deeper meaning...

In Christianity, butterflies are believed to be a symbol of hope and are said to embody the spirits of loved ones who have passed away.

So butterflies are often used during tributes to those who've passed away.

And that's exactly what one family did, but it had an unexpected outcome...

In 2014, Vanessa Van Gorder was killed in a car crash.

On Christmas night, the twenty-four-year-old from Pennsylvania lost control of her vehicle in the crash that saw her strike a ditch and get thrown from her car. Despite being taken to hospital, she tragically passed away as a consequence of her injuries in the early hours of boxing day.

Last week, Vanessa's brother, Max, got married and the family were determined to honor Vanessa during the ceremony.

Vanessa's father, Scott Van Gorder, was said to be "delighted" to be celebrating his son's marriage, but said that the day would be "bittersweet" following the heartbreaking death of his daughter 5 years ago.

So the family decided to honor Vanessa in the sweetest way.

Butterflies have long been special to the family, who used them to remember Vanessa's life since she tragically passed away. So, when Max tied the knot with Lydia Van Gorder in Honesdale, Pennsylvania, the family chose to release stunning orange butterflies into the air as a symbol of resurrection and a representation of life, in tribute to Vanessa.

But something very unexpected, yet beautiful, happened...

The family thought that the creatures would fly away.

But, instead, something amazing happened.

The beautiful creatures didn't fly away upon release. Instead, they perched on guests’ shoulders and clothes, and, most poignantly, clung to Vanessa's parents.

In one picture, a butterfly can be seen perfectly perched on Scott's finger.

The beautiful snaps were captured by photographer, Jessica Manns. After posting the image, Jessica wrote "That’s a real butterfly on his finger. This is probably the most emotional thing I’ve witnessed at a wedding." In fact, not only did the butterfly land on Scott's finger, but it stayed there for the rest of the ceremony, too.

The photographer posted the images on her Instagram, with a very poignant message.

"The groom’s sister tragically passed away in a car accident a few years prior during the Christmas holiday. To honor her, the groom’s parents released butterflies during the ceremony in her honor. There’s a common belief that our loved ones visit us sometimes as butterflies. As they released the butterflies, they wouldn’t fly off," she wrote. "They clung all over them and even stayed on their bodies the entire ceremony and well afterwards into cocktail hour."

The butterflies also accompanied Max and Lydia down the aisle.

This stunning shot captured the moment that the butterflies clung to Lydia's dress as the pair walked down the aisle.

Guests were brought to tears over the sight.

Onlookers cried as they watched the moving tribute unfold.

Vanessa's mom can be seen covered in the orange creatures.

In particular, the fluttery creatures stayed close to Vanessa's parents, Scott and Elizabeth, throughout the ceremony.

They wouldn't leave her side.

Elizabeth looks content as the butterflies cling to her shoulder.

But they also paid the bride a special visit.

As well as accompanying her down the aisle, one particular butterfly managed to get into the barn and perch on a strand of her hair during the speeches, in a breathtaking moment captured in this snap.

The butterfly stayed with the bride right through the speeches.

"A few hours later during the speeches, another butterfly somehow got inside the barn and landed on Lydia’s neck and remained there for all the speeches. Unreal," wrote Jessica.

The butterflies led people to believe that Vanessa was there in spirit.

The creatures wouldn't fly away from the ceremony. It seems that, while Vanessa wasn't able to see her brother get married in the flesh, she was there with her family in spirit.

The family thanked Jessica for capturing the ceremony so beautifully.

"Thank you again for capturing such a special and loving moment during our wedding," she wrote.

"Vanessa was with us there and throughout the night. I relive my wedding day every time I look at your photos. You captured every moment so beautifully."

The images also encouraged others to share their similar experiences.

One user wrote that she believed her late father came to comfort her in the form of a butterfly. She wrote: "After my dad passed away we were sitting around the pool that he dearly loved and there was a blue and black butterfly that kept landing on me and let me hold it in my hand. "It was there most of the day and wouldn’t leave me. ‘It was just there that day, never seen it again. Call me crazy but I believe he was trying to comfort me."

It seems that Vanessa's memory has lived on in the most beautiful way.