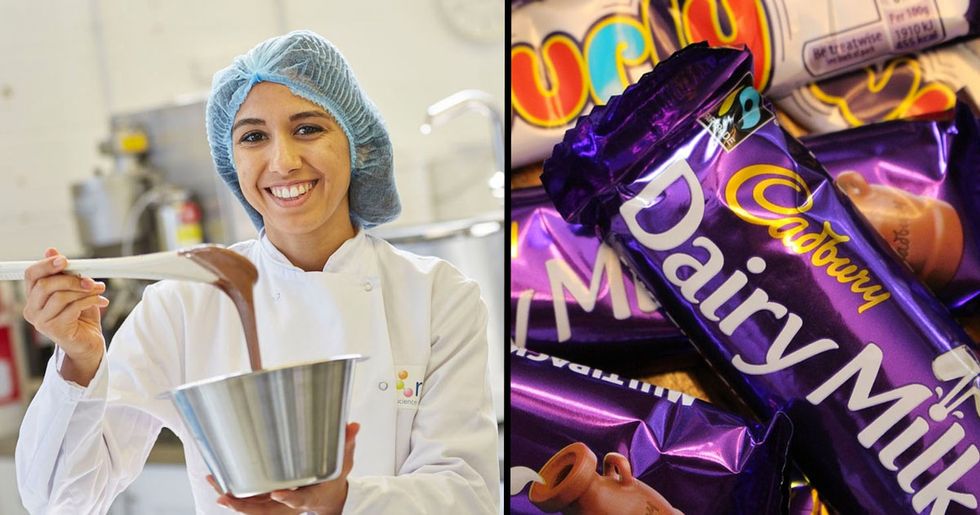 Cadbury Is Hiring a Chocolate Taster for $14 an Hour

If there's one universal truth we can all agree on in this complex world, it's that chocolate is good. Show us someone who "doesn't like chocolate," and we'll show you a liar. It's the sweet treat that immediately boosts mood and makes the world seem like a kinder, tastier place.

For most of us, chocolate is more of a leisure activity. In fact, many cite "chocolate tester" as more of a fantasy career, rather than something people actually get to do for a living. But now chocoholic's dreams can become a reality.

Mondelez International, which brings snacks such a Cadbury's chocolate and Oreos to our shelves, is recruiting new members for its chocolate-tasting team. Lucky employees will get to try out new launches in the confectionery world before they're released to the general public, and get paid for the privilege. We only have one question - where do we apply?

Chocolate really is just the best.

For many, it's more than just a tasty treat. It's something with emotional links, and has actually been proven to stimulate happy chemicals in the brain.

The chocolate making process is something of an art form.

The fact that chocolate is made from beans almost gives it a fairytale quality. There certainly appears to be at least a little bit of magic involved.

Either way, it's very good stuff.

There's nothing quite like a little (or large) bit of chocolate to instantly soothe and cheer. Think of it as a natural (and very cheap) form of therapy.

Some of us think of ourselves as chocolate aficionados.

Perhaps you've cultivated a finely-tuned palate for chocolate over the years. Maybe you just think of yourself as something of a chocolate expert.

If that's the case, working for a chocolate company might be your dream career.

As the old adage goes, if you choose a job you love, you never have to work a day in your life. For chocolate lovers, finding a way to turn their passion into a career could be key.

But "chocolate tester" sounds like a job which only exists in fantasy.

Surely there's not an actual career to be had in eating candy? Well, it turns out there is, and they're hiring.

The company is called Mondelez International.

They're a confectionary giant, responsible for some of your most favorite treats. One of their most successful products is Oreo cookies.

They're also responsible for the most iconic chocolate brand of all.

Mondelez owns Cadbury's, the British chocolate brand responsible for some of the most iconic snacks of all time, including the Creme Egg, the Eclair, the Crunchie and, of course, the Dairy Milk.

Mondelez is in charge of worldwide distribution of these treats.

Those lucky few who actually get to become a professional chocolate taster get to decide what makes the cut and becomes available to buy in over 150 countries.

Not only that, but they get paid for the privilege.

The position is advertised as being paid £10.75 (a little over fourteen dollars) per hour. Not amazing, but considering the quality of the "work," we'd be happy to take it.

The job is based in the UK.

It's based in the Mondelez factory in Wokingham, Berkshire, UK - just outside of London, in the south of England. But for a dream career like this, you'd be willing to relocate, right?

Mondelez are hiring for part of a team.

The need twelve expert-level chocolate tasters to ensure the quality and innovation of their confectionery products - and the team has to work well together for best results.

Even though the job sounds fun, it's also important they find the right person.

There are many different responsibilities that the chocolate-tasters will have to watch over. For one thing, they need to have excellent taste in chocolate products and be able to provide detailed and clear feedback.

Knowledge of chocolate is also essential.

Tasters will need to understand the differences between different chocolate products on a detailed level - and be able to provide very accurate descriptions of their different aspects.

So it's not just for any old chocolate fan.

The ideal candidate will know all their is to know about different tastes, textures, and flavors, plus which work best together across a massive range of chocolatey products.

Alongside all this chocolate knowledge, there are extra requirements.

Chocolate tasters need to be reliable and consistent, so as to ensure quality control and dependable results across the product ranges.

The ideal candidate has to be a smart cookie, too.

Mondelez wants their tasters to understand the chocolate industry more generally, and have a particular cognisance of ethical concerns relating to chocolate production.

Of course, a passion for chocolate is also key.

Let's be frank, if you aren't a true chocolate lover, this is probably a job application you can skip. Especially since there are so many others who would kill for a job which revolves around munching candy.

So enthusiasm is also a key factor.

Although we can't really imagine not being enthusiastic when showing up for a shift tasting chocolate. We'd be so curious to try the weirder, more experimental flavors.

Even so, it's clear the application process is no joke.

While a chocolate taster doesn't need to have any particular formal qualifications, it's clear that the right person for the job fits some very specific criteria.

Alongside the usual interview requirements, it's reported that candidates will be subjected to various taste challenges. They'll be asked to identify minor differences between different product samples, in order to check if they have the palate for the job.

It's likely there will be stiff competition.

Last time Mondelez listed a tasting position, it became one of the most viewed pages on LinkedIn, and attracted thousands of applicants.

In spite of the position being in the south of England, Mondelez reportedly expect applicants from around the world. They've previously had candidates from locations as distant as Australia.

The job has been widely advertised.

Think you've got what it takes?

The application process is open now, and closes on March 8th, 2019. If you want to go for the dreamy-sounding position, you can check it out here.

Although it seems like it'll be a hotly contested role.

It seems everyone who hears about the job immediately wants it. We're not surprised, though - it does sound like the best fun.

It seems many are offering their services.

In fact, with such a large pool of enthusiastic candidates, we imagine Mondelez will have a very hard time choosing. We don't envy their HR department!

Some are sharing some hilarious "applications."

This is one of our personal favorites, complete with blatant lies, bribery and begging for the role.

Some will do just about anything for their dream job.

And when that dream job is tasting chocolate for a living, who can blame them? We're sure Mondelez won't have any difficulty finding a huge selection of suitable candidates for such a fantasy job.

In fact, we're pretty tempted to throw our hat in the ring.

Although the position is only part time for now, getting a foot in the door at Mondelez could make for a future career in the chocolate industry, which sounds pretty delicious if you ask us.