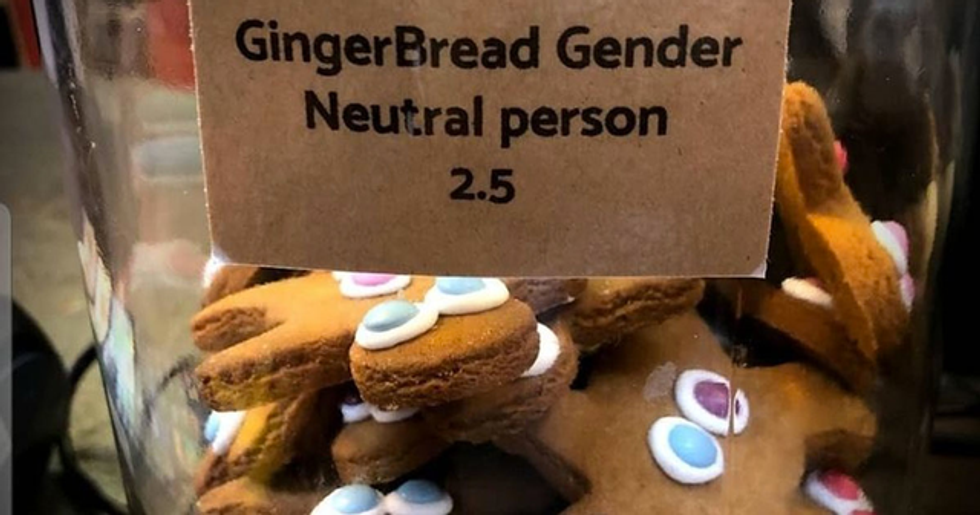 It's 2019, and we live in an era where people get offended by pretty much anything.

From childhood vaccinations to meat-eaters, and all the way to the good old fashioned round of applause, there's a variety of things that our "thin skin" generation finds offense with... But perhaps the most prominent one is gender terms.

Long gone are the days when there were simply two genders - men and women - because now, some people insist that there are over 100 genders in which a person can identify by. And, to make it just that little bit more confusing, some people claim to not identify by any gender at all.

But now, it seems that even our sweet treats aren't safe from this ideology. A cafe in New Zealand went viral after the owner renamed his selection of gingerbread men cookies to "gender-neutral gingerbread person" cookies.

There was initial outrage, but it turns out there's a deeper meaning behind the gender neutralization... Keep scrolling for the full story.

It all started over a gingerbread man.

A great opening to any story, isn't it?

Gingerbread men have been pretty unproblematic so far.

And nowadays, gingerbread men are simply not acceptable... And it's not because of their taste.

It's because of their gender.

Despite gingerbread men being cookies and not living beings, some people have actually found an issue with the gendering of the cookie figurines.

How can a cookie, which is an inanimate object without feelings, even have a gender, and what does it matter if it's a man?

Well, unless you've been living under a rock for the past few years...

You'll know that people will find almost anything to get offended over nowadays, and gender terms are certainly one of them.

And more and more people are identifying as gender-neutral, or non-binary.

The idea that there are only two genders is sometimes called a “gender binary," because binary means “having two parts." Therefore, people use the term “non-binary" to describe genders that don’t fall into one of these two more traditional categories of male or female.

More people are identifying as gender-neutral than ever before...

Well, trying to make a cookie gender-neutral could be classed as taking things too far, don't you think?

And this is exactly the issue that a cafe owner in New Zealand was confronted with.

From fresh coffee to homemade icecream, the cafe is ideal for those with a sweet tooth.

And something else on their menu?

Homemade gingerbread men. Yet, despite how delicious they look, not all customers were completely satisfied...

The cafe's owner was confronted regarding the name of the cookies.

When a customer questioned why the human-shaped snacks were called "gingerbread men" and not "gingerbread people," the owner, Andre Cettina, was inspired to make a change.

He decided to make their names more "appropriate"...

The label on the jar of cookies, which stood on the front counter of the cafe, was modified from "Gingerbread Men" to "Genderbread Gender Neutral Person." Andre shared the picture onto Facebook, writing "A little something for everyone" with a winking emoji.

Quite understandably, the cookie jar caused quite a stir...

But Andre insists that the label isn't to be taken too seriously. "It was completely tongue-in-cheek at the start," Andre, told Stuff.co.nz . "But it's become a really good conversation piece in the cafe."

People didn't understand that it was all a joke...

Andre explained: "We've had a lot of people commenting saying 'stop being so pedantic, it's just a biscuit'. I had to reply to them going, 'did you miss the whole point?'"

One Facebook user commented, "PC gone mad, always been gingerbread man, why change now. It's a biscuit, not a living creature. I find this all so sad!!" while another wrote, "Get real. Give them the storybook. Do they have no education, no history, no literature?"

Luckily, most people were able to see the humor in his post.

Arguing against the points, someone else replied, "Not sure why people getting so mad. This is a conversation starter, and these issues won't be dealt with until we are open to talking about them. People getting mad about this completely miss the point of what it could achieve."

And, remarkably, the joke has actually boosted his sales.

It turns out that people love a good gender-neutral cookie. "It used to be that 90 percent of the time we sold [the gingerbread biscuits], it was to kids. There are a lot more people buying them now, which is quite funny."

Because we all need to remember...

It's only a cookie, everyone! So you can all sit back down. But it turns out that cookies aren't the only things being gender neutralized... Barbie has now been revealed as non-binary. Keep scrolling to read the full story...