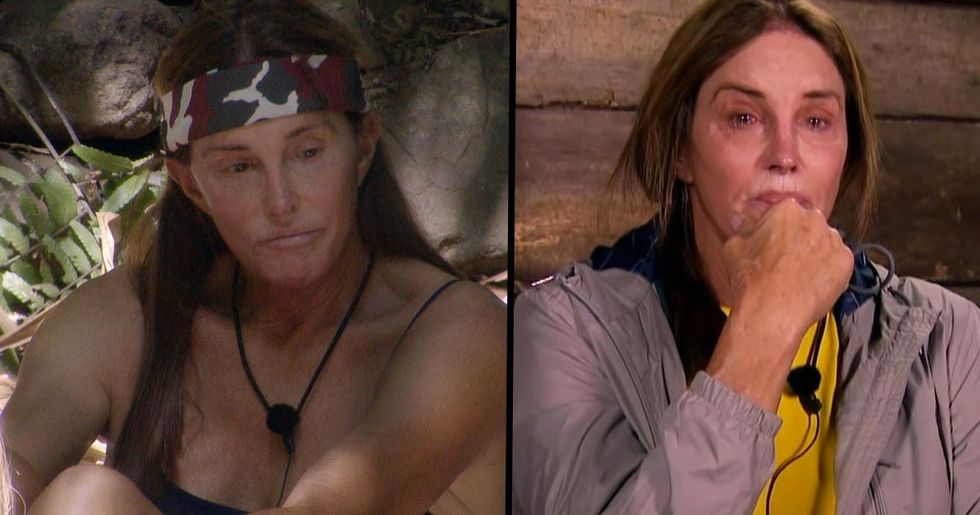 You may or may not have heard, but Caitlyn Jenner has recently, and quite bizarrely, joined a load of British celebrities on the U.K. version of I'm A Celebrity Get Me Out Of Here.

Anything for a bit of publicity, right? That and a healthy pay-cheque... rumor has it the former olympian is being paid half a million dollars to appear.

But they won't cut Caitlyn that cheque if she leaves early or is kicked off for misbehaving...

Caitlyn was on her best behavior for the first week or so and has even taken an early lead as the favorite. However, last night's broadcast showed a different side to Caitlyn.

It seems playing by the rules isn't always Caitlyn Jenner's number one priority...

The shocking transition understandably took its toll on her daughters, Kendall and Kylie. For the 2 girls, the birth of Caitlyn meant the loss of some elements of their dad. "My dad says it herself sometimes, it's kind of like mourning the loss of someone, because it is," Kendall said in a candid interview about Caitlyn's transition. "My dad is my dad, but he’s not there physically anymore. But she lets me call her dad -- that's the last little piece of dad I've got."

However, things didn't get off to the best start...

Within the first twenty-four hours, there were tears. While everyone was fast asleep, Caitlyn decided to sneak away into the Bush Telegraph to have a little cry.

Caitlyn is winning over the general public all on her own.

It seems Caitlyn doesn't need her family of all-stars plugging her appearance online. Heck, she doesn't need them to tell people to vote for her. By being herself she has won over the British audience.

It was Caitlyn's actions last night that moved viewers.

In a clear breach of the show's rules, Caitlyn snuck contraband back to camp.

What did she sneak in?

Well, this is where things get morally tricky... see, it wasn't like Caitlyn was smuggling in make-up or drugs or alcohol... In fact, she didn't smuggle anything in for herself. Her rule-breaking was an attempt to help out fellow campmate, sports commentator, Ian Wright.

Caitlyn smuggled food in for Ian.

After a task, most campmates were awarded a roast dinner. Unfortunately, Wright was excluded from this. Ian out of everyone has been suffering from the low portions and has been struggling with hunger. Caitlyn felt compelled to smuggle corn on the cob and some chicken back into camp for Ian.

Caitlyn certainly impressed viewers back home with her valiant efforts to feed Ian, even if it did mean she would get into trouble.

It really was a sweet moment.

The act demonstrated just what a good-hearted person Caitlyn Jenner really is.

The footage of Wright tucking into the secret food is television gold.

When your mum walks in your room after you've stole the Christmas chocolate from the kitchen before your allowed to… https://t.co/nXZ13wNxwE
— Sammii (@Sammii)1574718996.0

Caitlyn didn't have to put herself out for Ian, everyone else ate their food and came back empty-handed. It was clear to audiences that Caitlyn had done the right thing when everyone saw just how happy it made Ian.

Caitlyn made sure everyone was a happy camper.

I mean, how can she be punished for that?

Ian thought they had gotten away with it...

Sadly the cameras caught everything and Ian and Caitlyn will both face punishment for their part in the rule-break.

When presenters Ant and Dec went into camp the next morning to reveal who would be partaking in the day's task, they made sure the campmates knew that they were aware that rules had been broken.

Audiences won't be happy if Caitlyn is kicked off.

Say what you want about Caitlyn Jenner but that woman has got a heart of gold #ImACeleb
— Hannah Durcan (@Hannah Durcan)1574718925.0

Caitlyn is now the most popular campmate... I imagine if she is punished her popularity will grow even more.

This latest move by Caitlyn may just have bagged her the show. There are still two weeks to go until the King or Queen of the Jungle is crowned but after the whole corn-on-the-cob camaraderie, it may well be Queen Caitlyn taking the title. Continue scrolling to see why everyone was confused about Caitlyn Jenner's birthday cake...