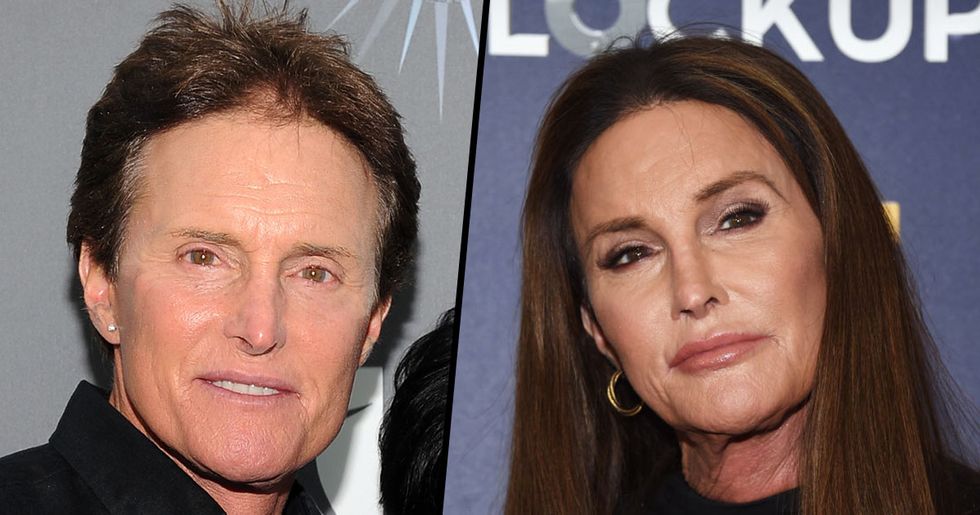 By now, everybody's heard of the Kardashians. A reality TV family equivalent to marmite. You either love them or absolutely hate them.

But, man, that's a huge family. To make it clear who is who, Kylie and Kendall are Caitlyn's daugters, while Kris is her ex-wife.

It seems that Kardashians are always in the news. This time Caitlyn Jenner's in the spotlight with her incredible #10YearChallenge Instagram post.

Say what you want, but Caitlyn must be the most, if not the only, inspirational person in the Kardashian clan. At 65, when most would say it's a waste of money, Caitlyn went ahead with sex reassignment surgery to live the rest of her life being who she really is.

To quote Evening Standard, "Social media has got pretty strange this year."

After just two weeks we've already seen a stock image of an egg beat Kylie Jenner's photo of Stormi in the race for the new world record for most-liked Instagram photo of all time. We also watched people run around blindfolded once Bird Box was released.

This new viral challenge, called the #10YearChallenge, asks people to post a recent picture of themselves next to one from 10 years ago.

The most popular #10YearChallenge photos at the moment belong to Nicki Minaj, which shows her go from all-black to all-pink style, and Pharrell, who looks younger in 2019.

The challenge has several different names.

It started as the #HowHardDidAgingHitYou challenge, the aging challenge, and #GlowUp challenge. But #10YearChallenge was the one that stuck.

What's the point of it?

To encourage self-love and show the world how in ten years you haven't aged a bit.

Some took the challenge seriously, while others added some humor to it.

Such as Amy Schumer who used a photo of Charlize Theron in the movie Monster as her 2009 shot.

Or Jameela Jamil who simply doubled one of her photos.

Other celebrities shocked the world by looking much younger in 2019 than in 2009. Like Jessica Biel and Trevor Noah.

Miley Cyrus shared a sweet and goofy throwback photo of her and Liam in 2009.

The photo was taken on the set of The Last Song, which is also where Liam and Miley met for the first time.

Caitlyn is currently 69 years old. In 2014, after her divorce from Kris Jenner, Caitlyn transitioned from male to female.

She only revealed her identity as a trans woman in an April 2015 interview with Vanity Fair.

The magazine also included Caitlyn's first pictures as a woman, which had been taken by photographer Annie Leibovtiz.

During the interview Caitlyn shared she finally felt free.

"If I was lying on my deathbed and I had kept this secret and never ever did anything about it, I would be lying there saying, ‘You just blew your entire life,’" she told Vanity Fair.

However, Belfast Telegraph reports that her sex reassignment surgery was only completed in 2017.

Caitlyn released a memoir the same year, The Secrets Of My Life, in which she wrote that her procedure "was a success, and [she feels] not only wonderful but liberated."

Back when she was still known as Bruce, she was a decathlete and had won the gold medal at the 1976 Olympics.

Now, according to Daily Mail, Caitlyn lives in her Malibu mansion with her girlfriend and fellow transsexual Sophia Hutchins.

She used to star in Keeping Up With the Kardashians.

But now she has her own show in which she talks about her transformation and advocates for the transsexual community.

She even has her own foundation, called the Caitlyn Jenner Foundation, which was set up 20 months ago and aims to support the transsexual community.

“I had a great time today distributing four grants to extremely deserving organizations in the Phoenix area. I am blessed to be a part of this community," Caitlyn wrote on Twitter.

She also recently told Paper magazine that the transsexual community was "the most misunderstood and the most underfunded" of the LGBT+ spectrum, Pink News says.

Sophia Hutchins, who is also the foundation's executive director, accompanied Caitlyn as she distributed the four grants.

For a long time, the pair's relationship has been just a rumor.

Pink News says that Sophia told The Hidden Truth, back in October, that there is no romantic relationship between her and Caitlyn. "We’re partners in everything we do, we’re inseparable, we’re business partners, we live together, we share a dog, we share family, we share a life together," she said.

Caitlyn has also recently withdrawn her support for Donald Trump, saying she was wrong about him and later publishing an opinion piece on his administration and transgender people on The Washington Post.

Caitlyn's still close with her daughters Kylie and Kendall.

But she's now "estranged from most of her former Kardashian stepchildren, who she helped raise for many years following the death of their father."

Caitlyn wrote about her difficult relationship with Khloé and how they hadn't talked for two years in her book, Elle says.

But today they seem to be okay again and talking. "We saw her on Christmas Eve," Kim said on Watch What Happens Live.

These past 10 years have clearly been a whirlwind for Caitlyn.

So she had a lot to celebrate when she posted her tribute to the #10YearChallenge.

Cosmopolitan says many have tried and some of them failed to show off how far they've come since 2008.

Caitlyn became the queen of the challenge. While most people tried to show off how well they've aged externally, Caitlyn shared both the outer and inner transformation she'd gone through.

She posted the photo on Tuesday and within just one day it has received half a million likes.

For the 2008 photo she used a shot of herself as Bruce Jenner, while for her 2018 one she used a photo from an awards show.

In the caption she wrote, "Now THAT is a #10YearChallenge Be authentic to yourself ?."

She lived as a man for 65 years and towards the end of her sixth decade she finally became her true self.

Some rumors say the pair might be thinking about getting married some time soon.

Kim Kardashian also liked the photo, showing that their feud is really over.

This is something that their fans were most happy about since their fall out was a very public one.

"I couldn't be more proud," he said in the comment section.

Caitlyn's fans praised her for bravery and marveled at her transformation.

Carriedunkel said, "You look so much happier being the person you were born to be! Your glow tho.. Girl, keep shinning."