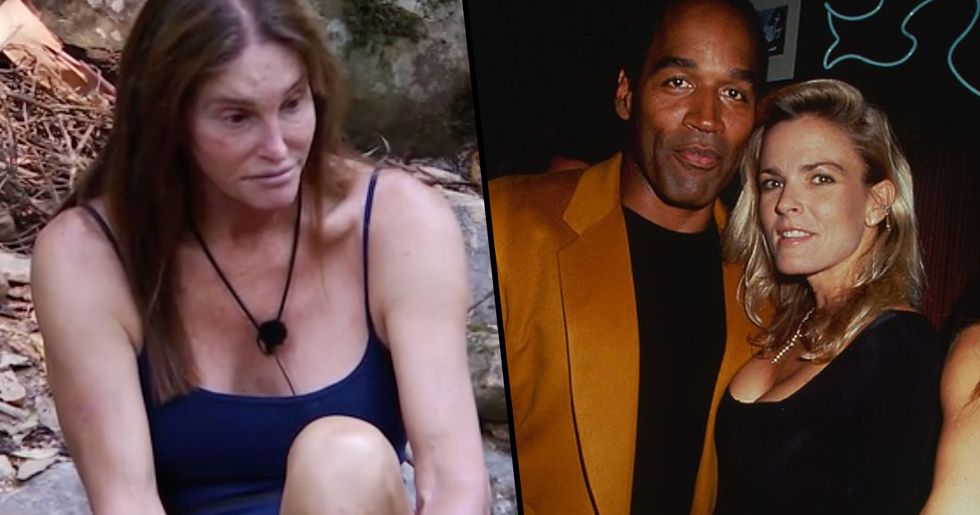 The Brits have been loving Caitlyn's presence on the show so far, and it's safe to say that the British public is all eager to hear some Kardashian family secrets.

Caitlyn has already revealed some hints about her world-famous family, but her most recent discussion about the O. J. Simpson has caught the attention of the entire world.

But she has apparently been taking everything in her stride...

So far, Caitlyn has abided by these strict rules.

But the NDA doesn't apply to the historic O. J. Simpson murder trial, in which the Kardashian's biological father was heavily involved in.

O. J. Simpson was a former NFL player and a broadcaster and actor.

In 1994, he was put on trial after being accused of murdering his ex-wife, Nicole Brown Simpson and her friend, Rob Goldman, by stabbing them to death.

After being charged with murder...

He was eventually acquitted by a jury after a lengthy and internationally publicized trial.

Simpson was, and still is, a free man.

But how does this involve the Kardashians?

Simpson was friends with the Kardashian's late father...

Robert Kardashian, the father of Kourtney, Robert, Kim, and Khloe, first crossed paths with Simpson in 1967 when he was a “waterboy" for the University of Southern California football team while Simpson was a running back, according to Slate. They later met again while playing tennis at a mutual friend’s house.

Simpson was known as "Uncle O. J." to the Kardashian sisters...

And the pair eventually got their wives, Kris Jenner and Nicole Brown Simpson to meet and become friends.

Robert hadn't worked as a lawyer for fifteen years, so he stepped in as a favor to his friend - which ultimately put a strain on the entire Kardashian family.

If it wasn't for Robert, the Kardashian name wouldn't even be known.

After his tragic death in 2003, he was remembered for not only being a wonderful father but for standing in for Simpson during a trial that is still heavily scrutinized to this day.

Kris was married to Caitlyn when the trial was underway...

So Caitlyn remembers a lot about that rocky period.

Caitlyn spoke of the trail yesterday in the jungle...

The episode of the show aired yesterday in the U.K, and it showed campmates Kate Garraway and Jacqueline Jossa discussing the O. J. Simpson trial with Cait.

Caitlyn revealed that she had seen Nicole Brown Simpson just 2 days before she was found dead...

"It was the first time that anybody saw anything like it, you were at the heart of it weren’t you?' Kate said to Caitlyn, to which she replied, "I saw Nicole two days before she was murdered. It was Kris’ best friend, we were right in the middle of it. [Kris'] ex-husband Robert - O. J. was the best man at their wedding."

Caitlyn recalled how it was a very difficult time...

She went on, "It was a bad time for everybody, very difficult. We knew what happened and this trial was a joke and when the verdict came down Kris just turned around to me and goes, 'We should have listened to Nicole from the beginning, she was right.'"

The Kardashian sisters were very close with their father.

"That night the verdict came in Kourtney and Kimberly [Kardashian] were in school and obviously they loved their father - and they should - and they’d been following this for a year and a half," she said.

"And when they walked in the door, I think it was Kourtney who said: 'Well I told you he didn’t do it.'"

It seems that Caitlyn isn't too convinced that Simpson was innocent...

"And I just said to the girls, 'Just because he got a not guilty didn’t mean he didn’t do it and I don’t want his name ever mentioned in this house again."'

To which she responded with, "I mean, there's just no way he didn't know."

Kate then asked if she’d liked O. J., which lead Caitlyn to say, "No. Too big an ego for me. We went on some vacations together with O. J. and Nicole and the kids. I liked Nicole and she sure didn’t deserve what she got."

Caitlyn was giving her true and honest perspective on the subject...

And this was appreciated by her campmates, to which Jacqueline said, "Caitlyn has been involved in some huge news, breaking stories and she is so open and honest about it and it’s a lot to take in, they were good friends and it’s a sad story." Watch the video for yourselves here... Caitlyn's always been known for her honesty. Keep scrolling to hear what she said about her private parts...