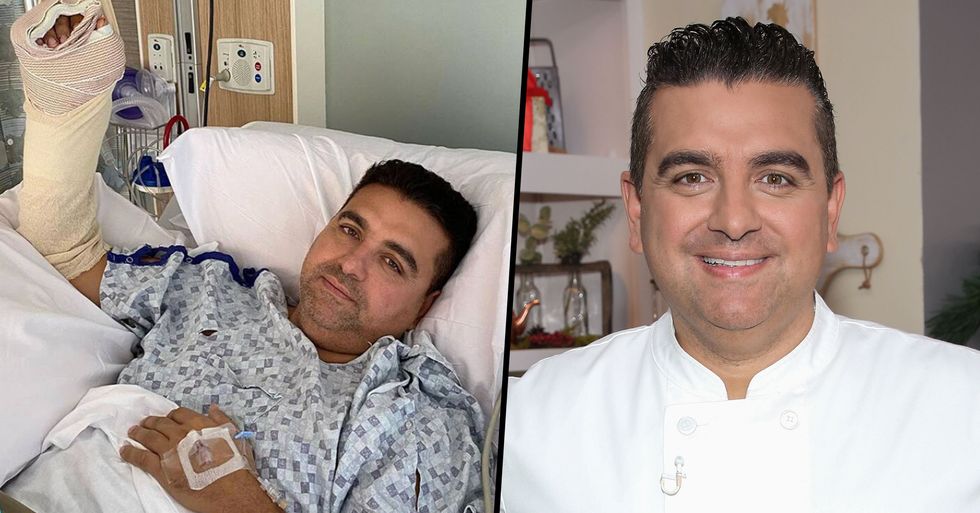 Buddy Valastro has been left needing surgery after a freak accident, and he's taken to Instagram to tell fans exactly what happened...

After a picture emerged on social media of the star, fans flooded the comments with messages of concern.

The star has now opened up to fans about what happened...

And how it may end his baking career.

Let's be honest, we've all sat there and binge-watched Cake Boss from time to time...

Something about that show is so addictive.

Buddy Valastro is at the heart of the series.

The forty-three-year-old is the owner of Carlo's Bakery featured on the hit TLC show.

And sees Buddy as he uses the help of his mother and 4 sisters to prepare extravagant cakes and pastries for clientele.

How is it even possible to make a cake like this?

Our minds are truly boggled.

The whole world was captured by the extreme cake creations...

And, due to the popularity of the show, the Carlos' sugary empire has since expanded to seventeen more bakeries.

The family bakery is clearly his pride and joy.

Having started working at the family's business aged eleven, the star went on to become the "Cake boss" following his father's tragic death when Buddy was just seventeen.

But this week, it's not his cakes that have landed him in the headlines.

And were all asking the same question: what the hell happened?!

Well, the star has revealed exactly what happened...

The injury, which he has described as "terrible," happened on Sunday.

He was bowling with his family at the time...

"There was a malfunction with the bowling pinsetter, a common fix in the past, but turned into a terrible accident," his rep told People Magazine.

But, after Buddy tried to release the bowling pin from the cage mechanism...

"His right hand became lodged and compressed inside the unit."

"Unable to remove his hand, he can see a 1-1/2' metal rod slowly and repeatedly impale his hand three times between his ring finger and middle finger."

He endured 5 minutes of his hand being impaled repeatedly...

And it resulted in his hand being crushed.

The pair used a reciprocating saw "to cut through the metal rod and relieve his father from the machine," according to the rep.

The star was rushed to Morristown Memorial in New Jersey where he underwent his first surgery.

Then, he was transferred to Hospital for Special Surgery in Manhattan for his second operation.

It's going to be a tough road to recovery.

"It will be an uphill battle as it's Buddy's dominant right hand and he will need prolonged recovery and therapy," Buddy's rep added.

On his Instagram post in which he shared the news of his freak injury with fans, he cracked a joke about his cast. "I was involved in a terrible accident a few days ago... 😔 What do you think of my new accessory? #recoveryjourney #positivevibes #ironfist #cakeboss #buddyvalastro," he wrote.

Tributes have poured out for the star.

Many are sending him well-wishes for a speedy recovery ...

And now Buddy has offered a heartbreaking update.

"It's really preliminary right now, but they're saying it's definitely going to be a long road to recovery," he said.

"My hands to me are my lifeline of everything I do. And I wonder, 'Am I ever going to do what I used to be able to do?'"