California Festival Shooter’s Chilling Reply When Asked ‘Why Are You Doing This?’ | 22 Words 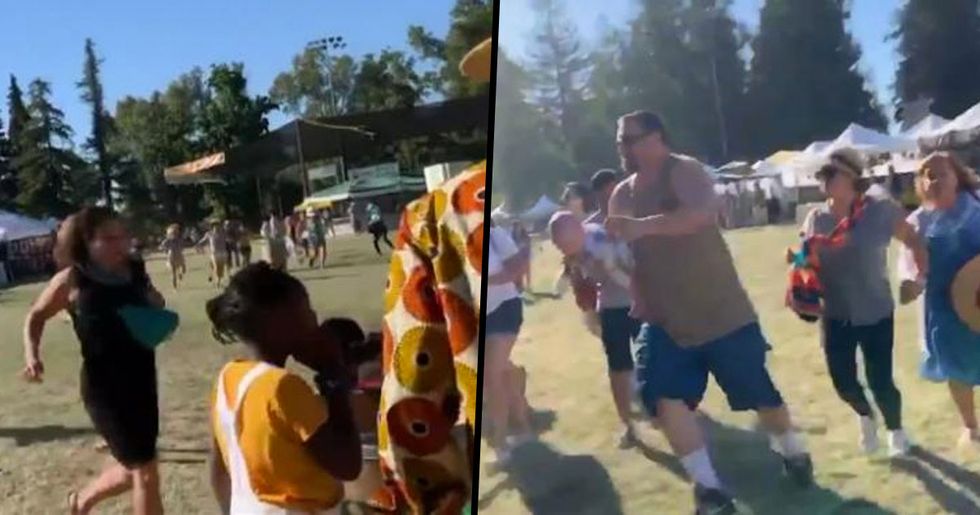 California Festival Shooter’s Chilling Reply When Asked ‘Why Are You Doing This?’

It seems as if gun crime across our country has become a common occurrence, though the devastating after-effects are just as painful every time we have to hear about it.

The news of a shooting at the annual Gilroy Garlic Festival in California left the nation shocked, yet again. Three people have been killed while another fifteen were left injured when a gunman opened fire during the event.

Here's everything we know about the incident so far, including the chilling words uttered from the mouth of the shooter about his motivations behind this horrendous attack.

A gunman opened fire on a crowd of people during the garlic festival in Gilroy.

Just as the festival was coming to an end on Sunday evening, in northern California, the sound of multiple shots being fired echoed through the air.

"People were running and screaming."

Videos taken during the incident have surfaced online in which you can hear the terror in people's voices as they run away from the deranged gunman. The full-length video has left us all shaken.

However, not everyone got away safely.

Three people were shot dead while another fifteen were left injured, but the number of casualties is said to rise, officials say.

Amongst these victims was a six-year-old child.

Stephen Romero was shot in the back as he, along with his family were playing in an inflatable bounce house.

Stephen's father, Alberto Romero said that he couldn't believe it when he heard the news.

He was not at the event. His wife called to say that she, her son and her mother had all been shot at the festival.

"Or maybe I was dreaming." And when he went to visit his son in the hospital, he heard the words no parents ever wants to hear.

After initially telling him that Stephen was in critical condition...

The doctors had to tell the heartbroken father that his son had died due to the extent of his injuries from the bullet.

However, his mother is currently in a medically induced coma as she was shot in the stomach. His grandmother is being treated for a gunshot to the leg and remains in hospital.

The other victims have not yet been identified.

But the investigation is well underway. The mayor of Gilroy, Roland Velasco, commented on the incident saying: "It’s been a long and sad day."

He also mentioned that there won't be much new evidence to present.

via: City of Gilroy

Instead, the Gilroy Police Department will be "setting the expectations for what the investigation will look like" during a conference.

The shooter has since been identified as a nineteen-year-old man.

Santino William Legan was shot dead at the scene by police.

Apparently, he snuck into the event without being caught.

Police said that the gunman gained entry to the festival by cutting through a fence with a rifle in his hand.

Security at the scene was tight.

There were armed police and metal detectors so he knew he would have to find an alternative path into the venue.

And after doing so, he opened fire on the crowd of festival-goers.

The motivation behind his attack was not clear but a loud conversation between a member of the public and the gunman occurred just as he began shooting.

The singer of the band "Tin Man" recalled what he heard.

Jack van Breen said he saw a man in a green shirt wielding what looked like an assault rifle. He, along with his band dove under the stage to shelter themselves.

He then said he heard this chilling conversation...

Someone shouted: "Why are you doing this?" at the shooter. He replied, "Because I’m very angry."

There were no more words uttered by anyone, just screams as he continued to shoot.

Another member of the band claims that he was aiming for the biggest crowds he could see.

"You could smell the gunpowder."

After the gunman was killed, police came to the stage and told the band to walk out carefully with their hands in the air. That was when they saw the remains of what was left of a once buzzing event.

Even though the initial shooter is dead, another suspect may be at large.

According to the US Gun Violence Archive, this is the 246th mass shooting to take place in 2019 alone.

We've seen and heard this story too many times.

The hearts of Gilroy PD and entire community go out to the victims of today's shooting at the Garlic Festival. The… https://t.co/l5XOTk7t3f
— Gilroy Police (@Gilroy Police)1564366925.0

How many more people have to die before stricter gun laws are put in place?