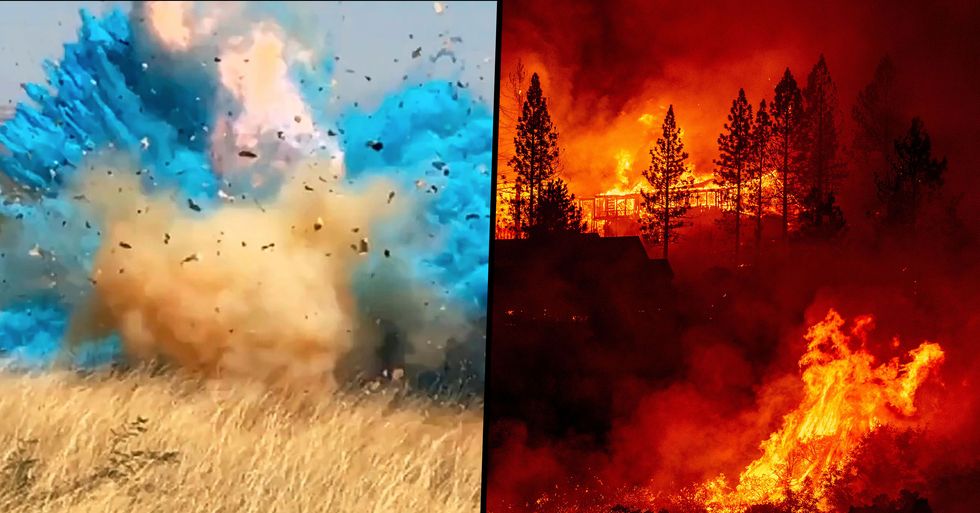 After the cause of the El Dorado fire was announced, people were not happy. But now it's been revealed this wasn't even the first gender-reveal-gone-wrong.

Gender reveal parties have become the norm in recent years...

But one of these parties had disastrous consequences for residents in California.

The criminal charges could fall under "a variety of charges," he said - which would be more severe if homes were destroyed. The family could also be hit with violations of public resources codes and even arson, under California's penal code section 452. As per the Daily Mail, arson convictions can result in a sentence of up to 9 years.

The woman who is widely credited as the person who popularized gender reveal parties has even spoken out.

And she is far from happy.

Jenna is believed to have started the gender-reveal trend after writing a blog post back in 2008.

During that post, she detailed how she revealed the gender of her baby with a cake that had pink icing on the inside.

But, in a Facebook post on Monday, Jenna Karvunidis wrote that it was time to "stop having these stupid parties."

"For the love of God, stop burning things down to tell everyone about your kid's p*nis. No one cares but you," she wrote.

Jenna went on to cite "toxic masculinity" as a reason for people feeling the need to explode something.

"It was 116 degrees in Pasadena yesterday and this tool thought it would be smart to light a fire about his kid's d---. Toxic masculinity is men thinking they need to explode something because simply enjoying a baby party is for sissies."

Jenna was quick to point out that that there's a difference between her gender reveal and the bigger-scale ones involving pyrotechnics.

"Excuse me for having a cake for my family in 2008. Just because I'm the gEnDeR rEvEaL iNVeNtoR doesn't mean I think people should burn down their communities," she wrote. "STOP."

Although, this isn't the first time Jenna has expressed regret over kickstarting the popular trend.

Last year, she wrote about how she now has "mixed feelings" about celebrating a child's gender before they are born. "Who cares what gender the baby is?" Jenna wrote in the post. "I did at the time because we didn't live in 2019 and didn't know what we know now — that assigning focus on gender at birth leaves out so much of their potential and talents that have nothing to do with what's between their legs."

And now it's come to light that this wasn't even the first accident.

His gender reveal involved blowing up a large amount of the explosive material Tannerite.

He then shot at the target with a powerful rifle.

Unsurprisingly, it blew up, revealing the gender of his unborn baby to be male. Unfortunately, the explosion quickly got out of control.

The fire destroyed 47,000 acres of forest and caused $8 million in damages.

Dickey received 5 years’ probation for a misdemeanor violation by the US Forest Service and an $8 million fine. Want more information on the current wildfires? Scroll on...