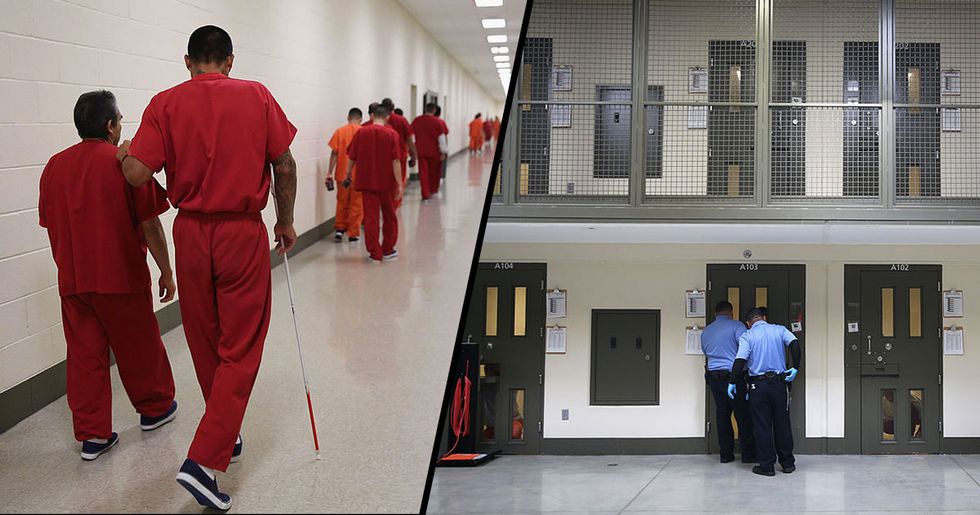 California has recently made the executive decision to fully ban private prisons and ICE detention facilities.

The bill has removed the profit motive from the incarceration and marks the latest clash in the state's battle with Trump over the treatment of immigrants.

With America having the highest prison inmate population in the world - 2.2 million, to be precise - private prisons were criticized for over-sentencing to make more money.

California is the first to make the bold moving in putting a complete ban on these private institutions, so keep scrolling to learn more...

A private prison works slightly different from federal and state prisons. The people imprisoned in private prisons are done so through a third-party that is contracted by a government agency.

They have a long history of contracting out services to private firms, such as medical services, food preparation, vocational training, and inmate transportation and the funding for these services doesn't rely upon the number of inmates that the prison holds.

Private prisons, on the other hand...

Funding is received from government contracts and the majority of these contracts are based on the total number of inmates and their average length of time served.

So the more inmates...

The more money the prison makes.

Many believed that private prisons were good for our country.

Whilst it was argued that private prisons were used to help with the over-crowding of federal and state prisons and that they would ultimately save money...

It has been argued that private prisons compromise the rights of the inmates and that there was a clear profit motive when sentencing more and more prisoners.

The longer an inmate's sentence, the more money the prison would make...

This often lead to unfair and incorrect sentencing for inmates on minor charges purely because it benefited the prison and pumped more money into the system.

But some believed that enough was enough...

On Wednesday last week, California lawmakers passed a bill banning the private facilities from operating in the state. The Guardian reported that the legislation is being hailed as a major victory for criminal justice reform because it removes the profit motive from incarceration.

California was one of the fastest-growing markets for private prisons.

As recently as 2016, private prisons locked up approximately 7,000 inmates from California, which was around 5 percent of the state's total prison population, according to the federal Bureau of Justice Statistics.

Private prisons weren't the only things banned in the passing of the bill...

It was also reported by The Guardian that it is probable that at least 4 large Immigration and Customs Enforcement centers (ICE) that hold up to 4,500 inmates at a time will be shut down.

He originally wrote it only to apply to contracts between the state's prison authority and private for-profit prison companies. But he amended the bill in June so that it also applied to the Immigration and Customs Enforcement agency's 4 major California detention centers.

The signing of the bill is looking almost certain...

Gavin Newsom, the state's governor, is yet to sign AB32 - the assembly bill of detention facilities - but, last year, he signaled support for the ban and said during a speech that "the state should end the outrage of private prisons once and for all."

AB32 is a flashpoint in the fight with Trump administration over immigrant treatment...

This includes when the Trump administration earlier this year began denying pleas by non-citizens who were trying to extend their time in the U.S. in order to treat severe medical conditions. The U.S. Citizenship and Immigration Services also sent out letters saying that the agency will no longer consider most deferrals of deportation for people with serious medical conditions.

Hamid Yazdan Panah, an immigrant attorney and regional director for the Northern California Rapid Response & Immigrant Defense Network said: "I think Geo Group is realizing their scheme to circumvent state law is putting them in a place where they could end up being be nailed."

It was reported that, last year, Geo Group sought to purchase property for an expansion of Mesa Verde...

The property was in Bakersfield and was intended to be a major expansion of the Mesa Verde ICE processing facility in Colorado. But these complied contracts were outlawed this year and, under the state Dignity Not Detention Act, cities and counties were barred from signing new agreements with ICE or amending existing contracts to permit expansion.

There is still concern...

Immigrant advocates still worry that ICE and its contractors could somehow find a way to bypass the ban and go ahead with expansions.

Lizbeth Alben of the Inland Coalition for Immigrant Justice said to The Guardian: "This legislation is the most powerful we’ve had. It’s a very big step."

Only time will tell.

"But we know Geo Group and Ice work in secrecy, and they work to circumvent contract laws, so we’re still monitoring things," Alben went on to say. The most important thing in this situation are the people who are currently being detained and held away from their families by ICE. Keep scrolling to learn of how a Border Cheif dismissed a crying young girl who pleaded for her parents back after they were arrested by ICE.