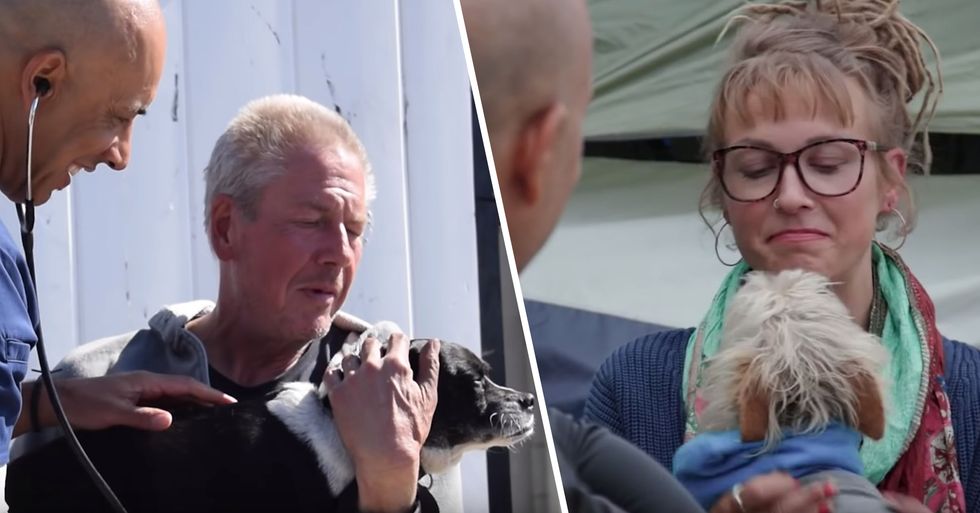 To be a vet, a person must be a huge animal lover, and one vet in California has proven this in the kindest possible way.

Keep scrolling to find out about the incredible Dr. Kwane Stewart.

But as any pet-owner will know...

Taking an animal to the vet isn't cheap.

You need a lot of money to ensure the health of your pet...

The standard visit to the vet here in America is around $50, but depending on the situation, people can pay up to $300 to treat their furry companions.

Of course, our pets are totally worth it...

But not everyone has that kind of money lying around.

And homeless people sadly fall into this category.

It's no secret that many of the homeless community have pets, in particular dogs, and these people give every cent they own to caring for their animals.

But we all know that a homeless person won't have $300 to hand for a vet check-up...

And the health of their pets is of up-most importance.

Dr. Kwane Stewart has found some kindness in his heart for the homeless community of California.

And he spends a lot of his time walking around California treating animals who live on the streets.

And it was when the Great Recession hit in 2007 when he realized that he needed to start helping those who were less fortunate than himself.

He generously treats the animals on the streets...

And he treats animal allergies, skin and ear infections, flea infestations, bad teeth, and even arthritis.

Dr. Kwane has had a real change of perspective from doing his job...

"Working on the streets I've experienced some of the most genuine stories of love, compassion, struggle, and hope. It's been life-changing and truly inspiring," he said.

The GoFundMe aims to raise donations to cover all the pricey surgeries his four-legged patients need.

Not all veterinary check-ups are affordable...

"The cost of minor treatments like ear infections, flea treatment, or vaccines can be around $100, whereas more serious cases like a tumor removal or dental with extractions can be $1,500... Saving a little buddy can really add up to quite a big sum of money," he wrote on the page.

And Dr. Kwane's appearance on his TV show, The Street Vet, more than likely helped his exposure.

So many people are grateful for his hard work...

Because at the end of the day, a pet is a part of the family, and for many people on the streets, their dog or cat is all they have. Keep scrolling to learn about the paralyzed kitten who shocked her vets when she started to walk again...