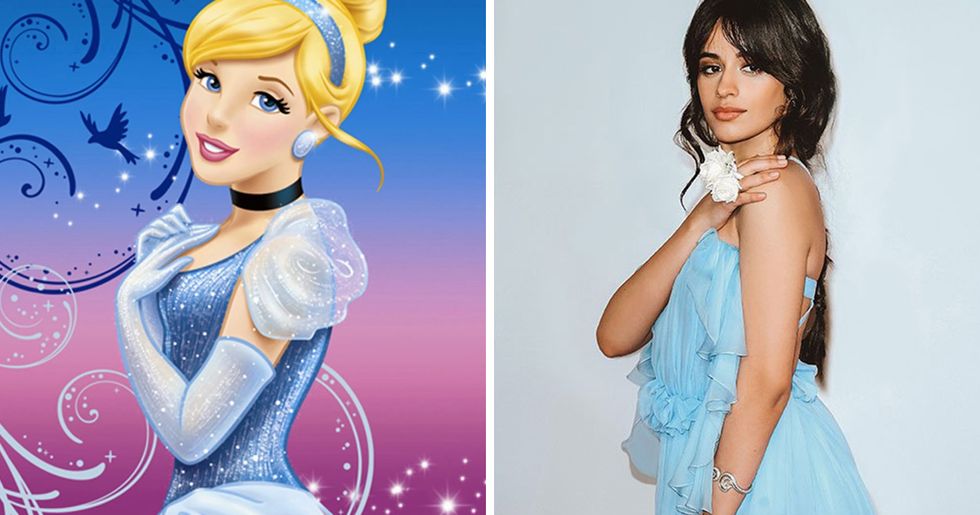 Hold onto your glass slippers Disney fans, because this new Cinderella remake is going to shatter all your preconceived fairytale ideas. I think we can all agree that Disney remakes, when done in great taste, are quite possibly the most anticipated box office reveals ever, no matter how long we have to wait. The bar keeps rising higher and higher for Disney remakes and now, it might have reached its peak.

Sony recently revealed that singer-songwriter Camila Cabello is going to be the new iconic Disney princess that we all love, Cinderella. Her acting debut will be starring in one of the greatest fairytales ever told--no pressure! Fans had mixed reactions to finding out about the remake and the casting choice and they were pretty vocal about it online.

With the help of James Corden and Kay Cannon, it seems like this movie has great potential, but leave it up to the internet to make or break something before it even happens.

Our girl Camila Cabello is thriving.

From her first X Factor audition at age 15, everyone knew this girl was meant for stardom.

Ever since she said goodbye, it's been nothing but good vibes.

Camila left the girl group Fifth Harmony in December of 2016 on some pretty rough terms and has been pursuing her solo singing career ever since.

But now she's free as a bird.

Camila has been making her own music, performing all around the world and getting a lot of love from her fans. Her solo career has already had a lot of big moments worth celebrating.

Her and Ricky Martin spiced things up on the stage with their performance and it had everyone dancing for days.

Or when she was nominated for two Grammys.

She is unstoppable, truly.

Or when her album went Platinum!

"Numbers and awards don’t drive me, but it is really special that this many people wanted to listen to my music," Camila said in her Instagram caption. She's as humble as grateful as a real princess.

Now it's only getting better.

The internet is freaking out because Sony shared some exciting and magical news with the rest of the world about the oh-so-talented singer.

Camila is going to be the star in the new rendition of Cinderella and the internet is shook.

It's nothing new to see a new Disney remake, but this one feels extra special because it's combining a classic fairytale with exceptional talent.

She's about to slay those glass slippers.

Who cares if she isn't blonde? She's going to kill it in that ball gown.

There's an amazing team behind it all.

James Corden, host of The Late Late Show and famous for all of his carpool karaoke sketches, is set to produce the movie after coming up with the new storyline.

We can also thank Kay Cannon.

Kay, who wrote Pitch Perfect and How to Be Single, is also on the team to write and direct this remake.

As more information was released about the movie, we found out Camila is doing more than just acting in the film.

She's going to do what she does best.

Camila Cabello will star in and create music for a new Cinderella re-imagining produced by James Corden and directe… https://t.co/AQo8JxWgG6
— Fandom (@Fandom)1554833696.0

Camila will be "integrally involved in the music for the film," The Hollywood Reporter stated. Which is amazing!

If you've seen any of her performances, you know she can be a little over the top, so we might be having a diva Cinderella on our hands, which is maybe what our world needs.

Camila already has some princess vibes which could be great training for her new role.

It was Disney destiny.

She's always been a fan of Disney, and now she gets to prove it on-screen for the first time in her career.

She rocks the ball gown look.

We already know she can fiercely work the princess-style dress, but it's going to take a lot more to be a Disney princess.

It's a dream come true.

She has a very special connection to Disney already so her being able to play the role of Cinderella is definitely a dream come true for the singer.

One who shows up a little hungover and takes naps on the floor. Now, this is a Disney princess we can all relate to!

At least we'll know she's the real deal and won't give us unrealistic expectations of what a princess looks and acts like!

Some people aren't super excited about it.

Not only is this a feat that's already been done, but some people think the other remakes have done enough justice for the fairytale and that Camila might not be ready for this role.

She really did do an amazing job.

It's hard to beat Lily James because she's an actual queen and could be the most perfect Cinderella to have ever played Cinderella. It's like she was made for this role.

Others just aren't excited for another remake.

We do have lots of versions of this fairytale already, so some feel a little worn out from this story.

Camila does have some big glass slippers to fill.

Let's not forget to pay homage to the blue-ball gown wearing princesses before who paved the way for this timeless tale to keep being retold, even for the thousandth time.

But we do have some very excited fans.

Some people can't wait until Sony lets the clock strike midnight and releases the film.

Some fans are getting a little carried away.

They've already been photoshopping posters and images because they cannot contain their excitement.

We can stan for this.

Camila is breaking glass ceilings while wearing glass slippers and a lot of fans are thrilled about that.

What a time to be alive, indeed.

Seeing a Latina woman play a Disney princess character that has primarily been played by blonde, white women is giving fans a lot to root for.

It's going to get a lot of attention.

Whether it's good or bad attention, we're not sure. But it's almost a guarantee that this is going to be all over our social media for a long time.

The Camila fandom is very emotional.

They are so proud of her and have seen her come so far, and they know she is only going to go farther and farther. This could be just the beginning of her acting career, or, if it goes south, could the end!

We don't know much about the rest of the storyline or who else will be in the cast, but the good news is that Sony is doing its best to speed-up production for all the fans who are anxiously awaiting more details.

Give the people what they want!

I am dying to find out who is playing Prince Charming. He is one lucky dude if he gets to star next to queen Camila.

Fan fiction for sure.

Some fans are daydreaming about Noah Centineo playing prince charming, but those are just the wild dreams of Instagram fans. But, a dream is a wish your heart makes, right?

He already has Prince Charming vibes, so who's to say we can't root for this to be a thing?

We'll just have to keep waiting!

Until we know more, we will do our best to wait patiently. In the meantime, share the exciting news with your fellow Disney fans!