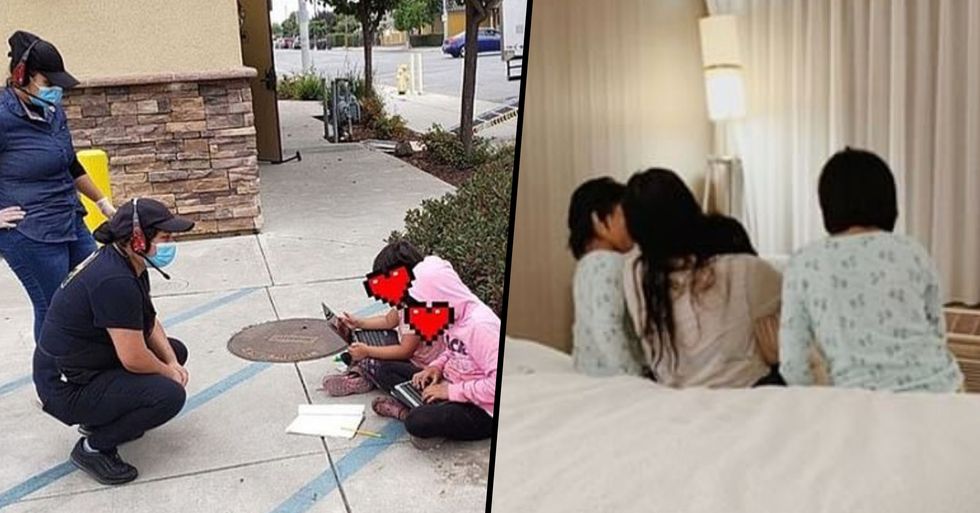 Campaign Raises $140,000 for Girls Who Were Forced To Use Taco Bell WiFi To Do Their Homework

After the picture of a group of girls using Taco Bell wifi to do their homework went viral, a campaign has stepped in to raise $140,000 for them...

We all saw the heartbreaking photo of 2 girls being forced to use Taco Bell wifi in order to complete their homework...

A Twitter user decided to post it in order to raise awareness about the obvious gap when it comes to having the means to complete "virtual learning."

Well, now people have rallied together in order to make sure they get more than just free wifi...

The details truly are heartwarming.

It's been a rough time for students...

But there are some struggles that are truly unbelievable.

The shift back to "normality" was never going to be easy...

There are huge logistical issues when adjusting to these new rules.

Students in certain districts are starting to return to school.

The move has divided opinion among parents and students.

It seems that many people have forgotten that the global pandemic has seized the entire world...

And even though numbers of infections are steadily dropping in many countries, the USA continues to be the worst affected.

But despite it all, schools are opening their doors again.

There seems to be no way for the school system to deal with this.

But some schools have opted for a more appropriate response to the pandemic.

They have shifted to virtual learning to make it safer for their students to continue learning but from a more appropriate environment.

However, this is taking a toll on some students.

Especially those in less privileged positions.

And one picture went viral this week for that very reason.

Two young children were spotted sitting on the ground outside a Taco Bell to use the free WiFi in an attempt to learn.

Should I throw out my couch and my dining room table and turn my apartment into a place for kids in Chicago who don… https://t.co/guHybysfjH
— Emily (@Emily)1598543475.0

@JonathanWHendry @curiousdev_ @sehurlburt Being outside with this smoke is hazardous. Yesterday we were all warne… https://t.co/1PqKlHUdnm
— Cindy Ferguson (@Cindy Ferguson)1598472390.0

@snvboy @sehurlburt I live in a rural area w/bad connectivity because it’s not profitable for the communications co… https://t.co/AMWslG1jgf
— Laura La (@Laura La)1598606913.0

Here are the pictures that got the whole of Twitter talking.

Now, a campaign has been put together for the 2 girls and their single mother, Juana, who is a migrant worker.

Jackie Lopez, a citizen of Salinas, decided that the family needed help.

The initial goal was $20,000, but in a matter of days, it has now reached a whopping $140,000 with donations continuing to pour in every single hour.

Lopez, who met with the family, said this:

"She is an essential worker that works in the fields picking berries. On her days off from work she sells flowers on the side of the road. When field work is off-season she walks around Salinas selling ice-cream, snacks and candy. She doesn’t take a day off because that is a day she could be making a few dollars to provide for her girls."

She also mentioned that they had just been kicked out of the single room they rented.

"I then realized that those same little girls that not only needed internet, clothes, and school supplies now needed a home too."

But thankfully, the donations were enough to put them into a hotel room for a week and buy them clothes and other school essentials.

"For now they are safe but they need as much help as they can get," Lopez added. "Thank you for helping change their lives. All children deserve a happy place to live and because of their dedication, these little girls deserve a safe space to learn. We appreciate every single one of you for helping to make that happen."

The school that the 2 girls attend also saw the photograph and spoke out.

A Salinas City Elementary School District rep said that officials are now providing wifi hotspots for the family to use.

So overall, this story had a happy ending.

Hopefully, this family will never have to worry about virtual learning again. Every child deserves the right to a good education. Keep scrolling to see the condition of some other schools during the coronavirus pandemic.