19 Brilliant Hacks for Your Next Family Camping Trip | 22 Words 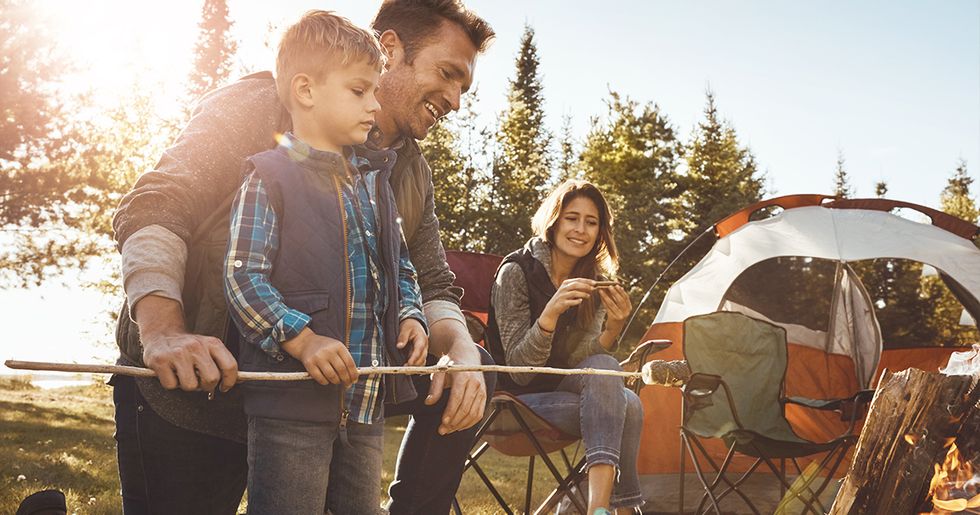 19 Brilliant Hacks for Your Next Family Camping Trip

The kids are out of school, the weather is warm is warm and sunny, and you've taken the week off — it's time to go camping!

But before you wander out into the wilderness, we have some handy camping hacks that will make your life in the great outdoors so much greater.

Thank goodness for the Internet and its many, many life hacks.

Here are a bunch you can use on your camping trip! (Step one is to get a Snuggie for every person in your camping party so you can be as happy as the family seen above.)

Hang travel-size soaps, shampoos, and conditioners on a single lanyard, so you don't have to bring a whole caddy or juggle several bottles on your way to the shower. You could even make a lanyard like this for each person, so everyone knows exactly where their soap is.

Use a drink cooler, some bungee cords, and a roll of paper towel to create a station specifically for washing hands. It's way more convenient than having to constantly turn the water hook-up on and off (or running to the bathrooms).

I'm convinced that shoe organizers are actually better at organizing non-shoes than actual shoes. Hang one up and use it to store all your camping knickknacks in one convenient, compartmentalized location.

A pool raft makes a comfy camping mattress in a pinch. It can also be rolled up for easy storage in the car on your way there and back. Plus, you can use it in the river/lake/pool if there's one nearby! Next up is a great nighttime hack.

Let there be light!

This is a great way to make a night light for little ones or simply add some illumination to your late-night games of Uno. (And you can drink the water, obvs.)

Tic Tac containers make so much more sense than round bottles for storing spices. I might actually do this in my kitchen cupboards, too!

Prep your morning cup of joe.

Make little coffee pods ahead of time, so they're ready right when you wake up every day. Coffee just tastes better when you drink it outside.

These fire starters are basically free.

As it turns out, dryer lint is very flammable. Tuck some into a couple of TP tubes and use them to start your campfire. (Side note: This is also why you should clean out your dryer lint tray every time you do laundry!)

Store some pre-made pancake batter in a clean ketchup bottle and get ready for a great camping breakfast. Squirt the batter right into a cast iron skillet on the fire and voilà! This next hack will bring you peace of mind.

Rather than bringing a bunch of pill bottles, pour whatever you think you'll need into clearly labeled pill containers and rest assured that you'll be totally covered if anyone needs something.

Grab a small stone from nearby and use it to create a makeshift anchor point with some lanyard or a bungee cord. Everyone will be very impressed by your ingenuity.

Actually, you should probably bring a bunch of bungee cords with you.

They come in handy for all kinds of camping situations that you might not think of before you head out. For instance, you could use one as a paper towel hanger!

Coat cotton balls in Vaseline! You could also store them in a cardboard egg carton and not have to deal with a messy plastic bag.

If the kids need something to do, send them on a nature scavenger hunt! That should keep them occupied. This next hack is for your TP!

Keep your toilet paper in a coffee can! You'll be glad you thought of this one if you accidentally drop the can in a puddle.

A cheap pencil box can be repurposed into a great storage space for your campfire forks. (Make sure you let them cool off before putting them in there, though!)

Let there be (more) light!

An upside-down flowerpot makes a great stand for those solar-powered stake lights. Place one on a picnic table, or even on the ground — you're probably less likely to trip over one if it has a big pot around it.

Keep the mosquitoes at bay!

A small bundle of sage leaves in the campfire should keep mosquitos from bugging you. It might also rid your campsite of any lurking evil spirits.

Camping is all about the food. Slice open a banana and cram in some marshmallows and chocolate/peanut butter chips. Wrap the whole thing in foil and place it in warm campfire coals for a few minutes. Open it up and enjoy! (You're gonna wanna use a fork and keep the paper towels handy for this one!) Share this list of hacks with someone planning a camping trip!