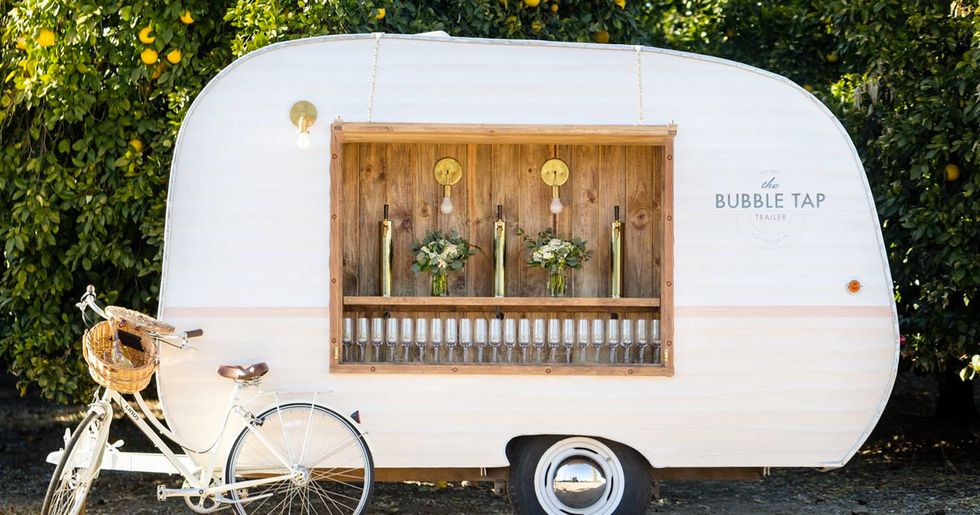 Weddings are often seen as some of the happiest days in the year. Not only is it a celebration of a couples’ love for each other, but it is also a day of flowers, cake and dancing. But there tends to be one thing that everyone universally loves about weddings – the thing that, for some people, makes a wedding worth going to. And that thing is, being able to drink in the middle of the day without having to make up an excuse. Often weddings are flowing with the nectar we call alcohol, from unlimited drinks to bottles of golden champagne – weddings are a great excuse to get plastered, and it seems that the wedding industry is always finding ways to make that happen.

Weddings can be strange events.

A wedding is often only as good as the couple getting hitched.

As they reflect the couples’ likes and dislikes.

For it is the couple who has to pick everything.

Where will the wedding be? Will it be in a church? Or on a beach?

What will the theme be?

If you can believe it, weddings often have themes that influence them. From specific colour palettes to full on costume party aesthetics. Anyone fancy a peacock wedding?

What music will play?

And then there’s the choice of music, which can range from light and classical to harsh and gothic – it’s your day after all, do what you want!

But not all weddings are dull and traditional.

Sometimes weddings can be informal events, full of fun and colour.

Basically a wedding can be a big party.

Yes, a huge party, with loads of drinking.

And it seems that someone has found a way to do this.

For there is now a new item you can have at your wedding, making the event even more like a summertime music festival.

But what is this item?

Well it’s called a ‘Bubble Tap Trailer’ and it's everything that you've been dreaming of for the perfect wedding.

I know it may sound weird but in basic terms, it’s a caravan with taps that dispense free-flowing prosecco.

Don’t worry, you’re not dreaming. This is real.

But who thought it up?

Well the trailer is the love child of a small company called Tap Trailer Co. who wanted to make the dispensing of drinks at events so much easier.

Not only this, but they wanted to save the world.

Along with the easy access to free-flowing sparkling wine, they wanted to make drinking at parties a more ‘green’ affair.

And the trailer does this!

The trailer is more resourceful because it limits the disposal of bottles, meaning that you can get drunk and save the planet at the same time.

But the trailer didn’t always look this pretty.

It took a while to look this pretty.

Before it was a rundown 1950’s trailer, with stains and dents all over its front.

But someone saw its full potential.

Luckily sister team, Jennifer and Nicole Disotell, saw the amount of value the caravan could have as a mobile bar – so they set to work to make it look beautiful.

It took a while.

The process took a while, as the photo of the original trailer was posted in late 2017 and the caravan was not ready until February 2018.

But it was worth the wait.

But obviously the Disotell siblings knew what they were doing, because the caravan came out looking stunning.

Now that’s what I call a glow up!

But not only that…

It’s also the perfect addition to any wedding, turning your special day into a classy and creative affair.

So how about it?

Does this sound like the perfect wedding addition to you?

If so, here’s some information you may need.

The trailer can be rented for a set rental fee.

And the service lasts 3 hours.

Plenty of time to get off your face before the bride and groom’s first dance. But you can request more hours if needed.

But then everything should go smooth from there.

You even get a tasting!

I’m sorry, but who wants to taste when they just drink!

Who knows what this means for the future.

With the success of the Bubble Tap, maybe we’ll see other inventions in the future.

I mean we could get a Cocktail Tap trailer! How amazing does that sound?

A wedding with Pina Colada’s is the wedding for me.

I mean, that sounds almost too good to be true now.