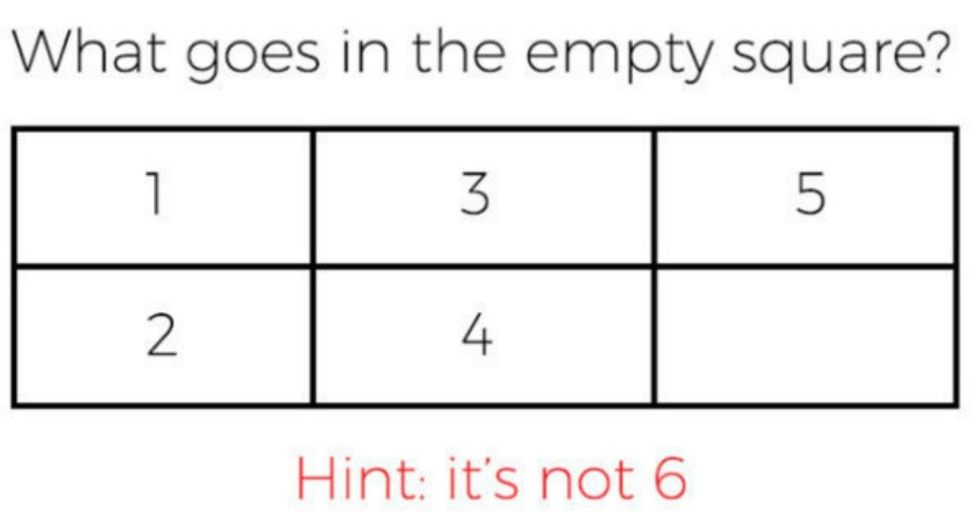 Can You Answer This Question In Less Than 9 Seconds?

Are you ready for your brain to hurt?

Probably not, but it just might after you run through this "simple" brain teaser. Why is that the "simple" ones always give us the most grief?

Some brain teasers are relatively straightforward, like this one.

But other puzzles and problems are more like riddles.

Which is to say, they won't get solved if you just work hard. You'll need to figure out the "trick" to get to the right answer. That's the rub, and how the puzzles get you.

Most online quizzes aren't exactly an IQ test or even the Stanford Achievement Tests we all used to take when we were in school, but it doesn't mean that they're always easy.

So if you're feeling up to it, get ready to dust off the ole' thinkin' cap and give this one a try.

Oh, and not to put the screws to you TOO bad, but the people who "get" this puzzle you're about to see do so in less than ten seconds. So, uh, no pressure or anything. Check it out on the next page.

Of course it wouldn't be a puzzle if you could actually solve it in two seconds, and I'm pretty sure this one is going to take you more than 10 seconds.

You didn't think you were going to get off that easy, did you? Sorry. If it was as simple as counting, this wouldn't be such a popular — or frustrating — puzzle.

You didn't expect it to be this hard, did you? Remember...it's not six.

You have to think outside of the box in a way that's different than you usually would. So what's the answer?

I hate to harp on this, but if you didn't get it, by now, it's probably because you're taking the wrong approach.

In fact, not to give TOO much away, but it's not really a mathematical issue at all. Hmm. That's either going to help you or frustrate you even more.

Well, your time's up.

The clock has run out, and the answer's on the next page. I guess if you're going to get one more clue, it's this: the answer isn't a number at all. Does that help at all? Probably not, so let's get you the answer.

Be honest. Did you get it right?

I guess that one was specifically suited to a certain demographic, isn't it?

Unless you've driven stick regularly, or are a person who's big into cars, you're probably not that familiar with the gearshift layout. It's ok. This isn't really a test of intelligence as much as it is a curiosity among the dwindling number of people who are familiar with manual transmissions.

Driving a stick shift, especially when so many cars today have super-high-tech automatics, is a relic of a bygone time for many.

However, that also makes it a point of pride. I mean, it's not often anymore that someone can jump behind the wheel of a stickshift car and take off.

There's an upside to it beyond just the "cool" factor.

I'm so old school I know how to drive a vehicle with a manual transmission. I learned how to drive on one! Now it's the best theft deterrent
— Faith (@Faith)1500929046.0

Since so few people know how to drive stick anymore, it's a safe bet that fewer thieves trolling for cars know how to as well. That means your car is actually more secure.

So even if you didn't walk away with the answer to the tricky puzzle.

You at least learned a little piece of knowledge along the way. Hopefully, that makes you feel a LITTLE better about things. Try not to grind the gearbox too much if this has developed a sudden urge to drive stick.

Here's another one that has to do with cars.

Remember: Only one of the box labels is true. Keep that in mind.

Now, which box do you want to open?

Are you sure? Double sure? Triple sure? Absolutely, positively positive? OK. What'll it be?

OK, that one was pretty easy.

Let's do another! This time, we're talking about birthdays.

You might want to grab a paper and pencil. Or maybe a calendar. Or...just something to help you out. Maybe someone named Cheryl?

I bet you never expected figuring out someone's birthday would be this difficult.

What's Cheryl's problem, anyway? Who has a grid like this handy every time someone asks something as simple as when their birthday is?!

And the answer is...

July 16! I could try to explain the answer to you, but the New York Times already did it way better than I ever could. Here's their explanation.

You might want to grab a calculator for this next one.

Although, if you paid attention in your high school algebra class, you should be able to figure it out using just a pencil and paper. Are you feeling up to the challenge?

Solve for w, x, y, and z. (Aren't you thrilled to finally be using that algebra again? You always wondered whether it'd ever come in handy in "real life"!)

OK! Here you go: Two of the variables have the same value. If you need even more of a hint, those two variables are w and z.

Ready for the answer?

For this next one, we're going to take a peek into a workplace that is probably somewhat similar to your own. Someone needs work done and needs to figure out who to ask to do it. Can you figure it out?

First of all, let me just start with this: The answer is not "There is not enough information." Yep! This convoluted problem actually does have a solution.

Cathy! Here's a quick breakdown of why. Hopefully you're not having your own personal breakdown.