Can You Identify the Absolutely Horrifying Thing Growing in This Family's Water Meter? | 22 Words 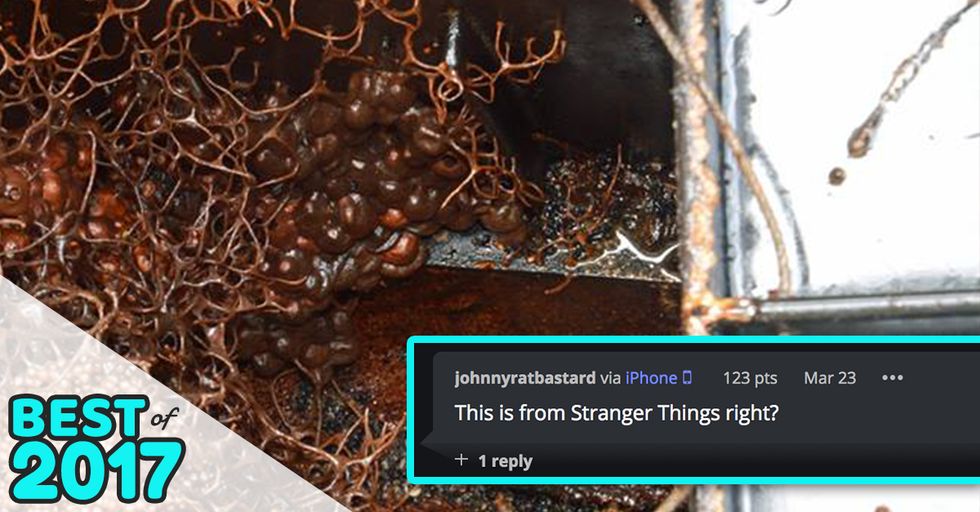 Can You Identify the Absolutely Horrifying Thing Growing in This Family's Water Meter?

2017 is coming to a close and it's time to reflect over the last year. The high highs, the low lows, and all those crazy things in between.

Like the time the internet rallied together and helped a family identify the horrifying thing growing in their water meter. Remember that? Or have you desperately been trying to erase the image of it from your brain?

Either way, it was pretty epic, and we're all about revisiting the insanity.

When Imgur user Robbie1249 of Brisbane, Australia posted a photo of something growing in his parent's water meter, he was looking for answers.

Seriously, can you look at this without feeling sick? And yet we can't look away! It's so horribly fascinating and looks alive!

So, naturally he reached out to the Internet for help. "Imgur, can you help? My parent's opened their water meter box for the first time in ages, and found this inside. We have no idea what it is. The box is probably 20x40cm. There were flies buzzing around but no other animals we can see. Kinda afraid to remove it until we know what it is," he captioned the horrifying image.

Good lord that picture is something else.

There were plenty of joke responses to Robbie1249's post, which is to be expected from anything on the internet. One person commented, "That's the Flood"; another warned, "If you touch it, you'll probably get an arm like that guy in District 9." Yep. Everyone's got jokes!

Real funny, people! Luckily, Robbie1249 found out exactly what the mess was.

Turns out, it's a common member of Australian wildlife and they're known as Tetragonula.  Robbie1249 posted, "OMG you did it! Thank you Omnirock, TexasRaised, and others... looks like it's Tetragonula (a kind of stingless bee, that I'd never heard of until now)."

Well hallelujah, because it's actually harmless and it's not an alien that's about to cause havoc all over Australia. Although, that would be kind of awesome. So what exactly are these little buggers?

While yes, they're terrifying to behold, they're just little stingless bees.

That's right! They're little bees, and they don't even have stingers. We can all breathe a sigh of relief (and just hope the image doesn't haunt us in our dreams).

Of course, these Imgur users and their suggestions are a tad more entertaining than just the fact that it's a bunch of stingless bees.

One person wrote, "Read 'The Mountain of Madness' by H. P. Lovecraft and get back to us..." Another joked, "Even the water tries to kill you in Australia."

Perhaps the best response was from the person who suggested it was something from "Stranger Things".

Now that would've been cool. Terrifying, but pretty dang cool. The most thought-out response has to be the person who posted, "It's an Alien parasite. Torch it quick and move on quietly knowing you saved the human race from near destruction."

They're known for being tiny little things with a developed social structure that is comparable to honey bees. They're endemic to the northeast coast of Australia, which makes sense as to why someone would find them in Brisbane.

Either way, we're relieved to know that Robbie1249 and his family are going to be just fine.

Even though we seriously never want to see that image again. But if we do, we're going full Ripley from Alien on them.