Can You Match the 'Stranger Things' Season 2 Poster with Its Classic Horror Inspiration? | 22 Words 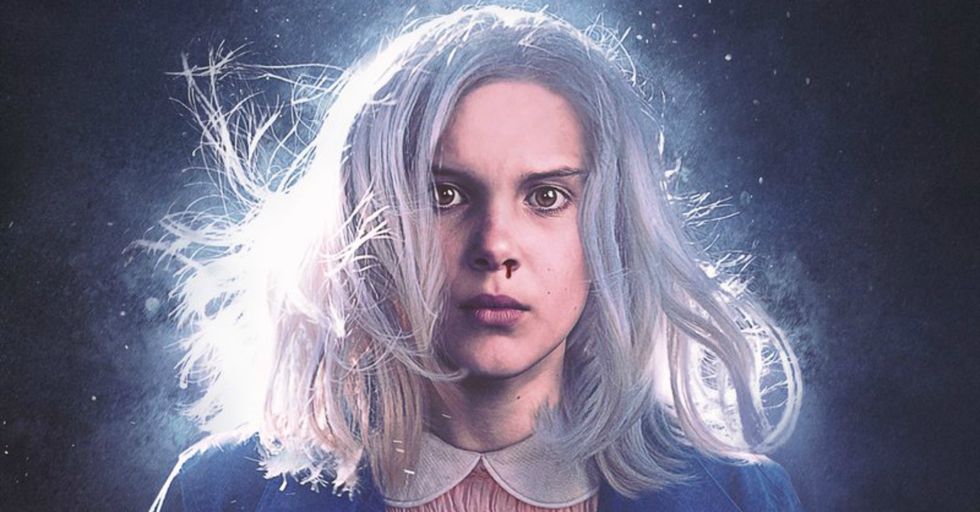 Can You Match the 'Stranger Things' Season 2 Poster with Its Classic Horror Inspiration?

Stranger Things returns to Netflix on October 27, just in time for Halloween. You can bet the second season of this nostalgia-laden nod to '80s horror will make you as wildly excited as Joyce was when she figured out she could talk to Will in The Upside Down through her Christmas lights.

In the meantime, Netflix released some seriously cool posters for the show that are all inspired by classic images from some of the most iconic '80s horror movies. Can you spot the lookalikes?

Warning: Spoilers for the first season of Stranger Things right below this. If you haven't watched it yet, do it now. Please. It's great.

Even Barb is excited about these posters — and she's dead.

On Thursday, September 14, super sweet Stranger Things posters began being tweeted out one by one by the official Twitter account for the show.

But that's not the only one! Jaws may have had the original "monster menacing from below" poster, but there's another one...

It is this author's professional opinion that Jaws is great but that Tremors is a near-perfect movie. Kevin Bacon, Reba McIntyre, and giant monster "graboid" worms that sense your movements from underground? Yes, please!

This gorgeous poster features Will, the "Only survivor of The Upside Down."

But where does that pod image originate? Not to mention that chilling tagline, "In The Upside Down, no one can hear you scream?"

Why, Alien of course!

Twitter users had a monstrously good time trying to be the first to identify the inspiration for each Stranger Things poster. They're super impressive. Ripley would be proud.

"Joyce got up on the wrong side of The Upside Down," this poster reads.

Wait...is this a spoiler? That creepy, nasty hand reaching up out of the ground and grabbing Joyce by the throat is no joke, but it's also kind of familiar...

And that's because Joyce's poster is inspired by The Evil Dead.

You know, Bruce Campbell, a cabin in the woods, a bunch of terrifying demons, and a legion of fantastic sequels and adaptations (including Evil Dead II, Army of Darkness, the Evil Dead remake — which is legit — and the TV show, Ash vs Evil Dead.) The franchise won't die, and honestly, we don't want it to.

We cannot wait for the return of Eleven.

She's the most badass Eggo-waffle-eating preteen science experiment ever to grace the small screen. And this poster is properly haunting.

That Eleven poster is inspired by this haunting one for Firestarter.

Yes, that is tiny Drew Barrymore. In a Stephen King adaptation. About a little girl who can set things on fire just by looking at them. It's like Carrie, only with way less pig blood...and way more flames. But there's more!

Anyone else develop a mild (or not so mild) crush on Hawkins Chief of Police, Jim Hopper, in the first season?

Yeah, us too. And this black-and-white poster of his smoldering face isn't helping. But what old movie is this a reference to? There's a hint in the tweet, where it says, "Don't walk. Run to #StrangerThursdays. It begins now."

This is also a Stephen King adaptation (he wrote this novel under his pseudonym, Richard Bachman). The story is set in a dystopian U.S. between 2017 and 2019 (so, uh, now), and it's about a TV show called The Running Man, where criminals have to run for their lives full-on Hunger Games style from "stalkers" who are tasked with taking them out. Cool cool.

This precious poster is perfectly sweet and perfectly '80s.

It's like every awkward yearbook portrait in one amazing poster. Are they selling these? Because we would definitely buy this one.

Especially because it's inspired by Stand By Me!

Believe it or not, Stand By Me is another Stephen King adaptation. The dude is incredibly prolific.

In Stranger Things' first season, Nancy proved to be a fierce woman.

But she looks pretty scared in this poster. Wonder what monsters she'll face in The Upside Down in season two (in addition to the Demogorgon, whose toothy, open mouth you can see in the poster's top left corner). You'll be terrified of this next one...

The creepy hand from above is obviously inspired by A Nightmare on Elm Street.

Would you rather be stalked by the Demogorgon in The Upside Down or tormented by Freddy Krueger in your very own dreams? That's one heck of a "would you rather."

Did these posters leave you creeped out?