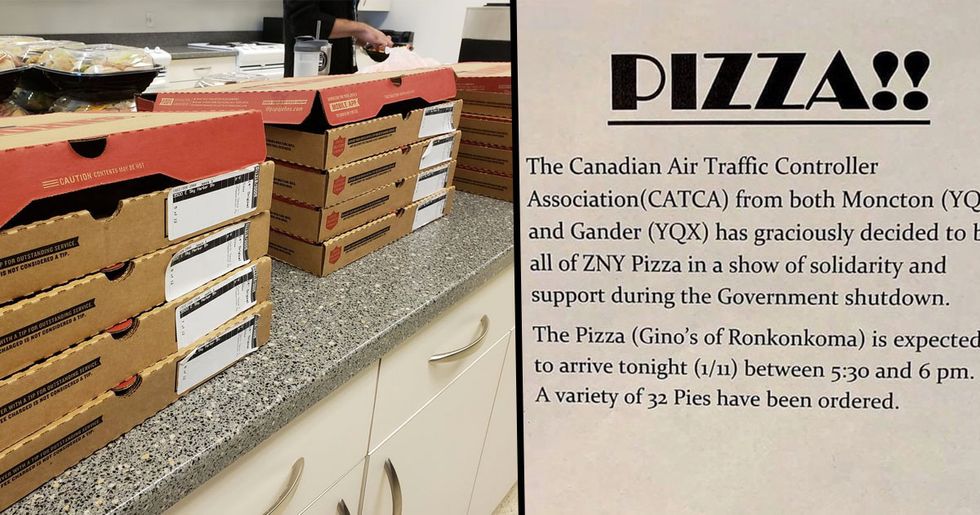 We are now in the middle of a government shutdown, one brought on by US President, Donald Trump, and one that has unfortunately left over 800,000 federal employees working without pay since December 22nd. Of course this has left many people working hard to receive nothing at the end, not a single penny. Among those to have been hit by the shutdown are the traffic controllers, who recently found themselves rewarded for their work and dedication. Sadly, they were not paid, but they were allowed another delicious treat by their Canadian brothers.

They gave them pizza.

There was even a notice.

At the control centre in Ronkonkoma, Long Island, staff were surprised to find a notice had been placed in the hallway.

They were even more surprised by what it said.

The notice told them than Canadian Air Traffic Control had bought them pizza during their hard time.

Many employees took to the social media platform to show their gratitude towards the kind people.

But they were not the first.

If you can believe it, Ronkonkoma was not the first centre to be given such a caring gift and symbol of unity.

In fact, it’s become a kind of trend.

The first case was documented when Edmonton controllers sent pizza to the staff in Anchorage, Alaska.

Since then, a lot of pizza has been sent.

Since, Canadian control centres have sent pizza to 35 US units – such as Boston, Seattle, Minneapolis and Cleveland.

And no one can contain their emotions.

With many US staff sharing the gestures on social media for the whole world to admire.

Surely it can’t get better, right? Well the initiative came from Canadian employees themselves.

Something they should be proud of.

Spokesman for Nav Canada, Ron Singer expressed his congratulations to the Canadian staff – saying that they should be proud of themselves.

But not all the news is great.

Since the government shutdown 14,000 workers have been working without pay.

Recently the NATCA announced that it is suing the federal government for its members working without pay.

All this for a wall.

It appears that Trump’s dreams of building a border wall have driven him to the edge, as the government shutdown continues in the hopes of funding the venture.

So I’m sure the pizza helped.

Although it wasn’t a pay check, the pizza showed that the American air controllers are not on their own and still have the support of their Canadian neighbours.

I can’t be the only one to read a story like this and have my faith in humanity restored, can I?