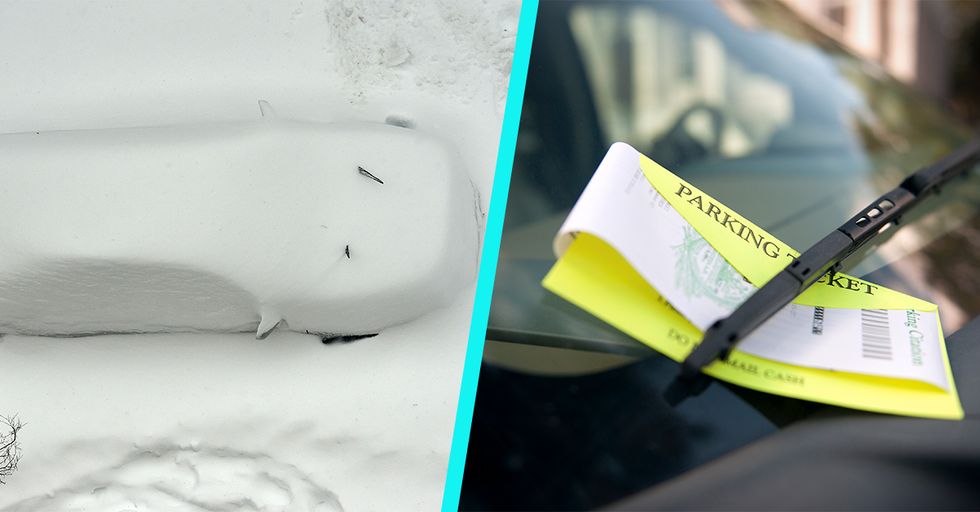 If you can't stand the snow, get out of the Canada, eh? When we Americans think of our northern neighbors we generally conjure up images of laid back, fun-loving people who think nothing of a few degrees below zero and a couple dozen inches of snow. A recent prank pulled by an artist in Montreal lives up to everything we think about Canadians.

When not chasing a puck around the ice, or sitting near the ice watching their countrymen chase a puck around, Canadians are simply coated in ice and snow. This looks bad to the rest of us, but they love it. With maple syrup fortifying their blood, this feels like a balmy spring day to an average Canadian.

Think your commute is bad? This is how Canadians get to work every single day.

I'm just kidding. Some people have cars to slide around on the ice in. And others commute by dog sled.

What does a Canadian who wants a new car do? Make one out of snow.

This is Montreal artist Simon Laprise and his recent snow creation. He explains on his Facebook page, L.S.D. Laprise Simon Designs, that he created the snow car as a prank on the snow removal guys who would be sliding around in their trucks later on that night.

What better way to spend your time than carving out a giant snow bank?

Actually, in Canada, that is the best way to spend your time. Laprise explains that they had recently got a dumping of 40 cm (about 16 inches) of snow. The sides of the roads were covered in giant snowbanks. So, naturally, Laprise carved out a DeLorean.

As an artist, he actually has the skills to make his snow car look awesome.

Don't feel bad that your snowmen are lame. You are not a Canadian artist. If you were, you'd have realistic rims, door handles, and perfectly recessed windows on your snowbank DeLorean too. It turns out, his car was a bit too realistic...

It certainly looks like someone ignored the parking ban.

A real car coated in snow and left on the street in the way of the plows would get a ticket. So what happens when a fake car made of snow is parked on the street?

Naturally, the boys in blue turned up.

Laprise meant his prank as a joke for the snow plows. It hadn't occurred to him that his snow car might draw the attention of the cops. Uh-oh...

So what happens when a cop tries to write out a ticket for a fake car?

We'd love to know the following things: at what point did the officer realize it was a fake car? Did he already start writing the ticket first? Did he admire the craftsmanship, think it was funny, or was he irritated? Is the snow car still technically violating a parking ban?

The car was ultimately ticketed. Here's the "ticket" that was left on the "car's" "windscreen."

It translates to, "You made our night!" Of course Canadian cops can appreciate a snow DeLorean! Those crazy Canucks!

As perfect as the snow car is, its life is destined to be short.

A realistic DeLorean made of snow will not be an obstacle for Montreal's street clearing crew. Here's hoping they get enough snow for Laprise to reprise other movie-famous cars. How about an entire train?