"Shows these giants as a unique presence, individuals enjoying their precious playtime..." | 22 Words 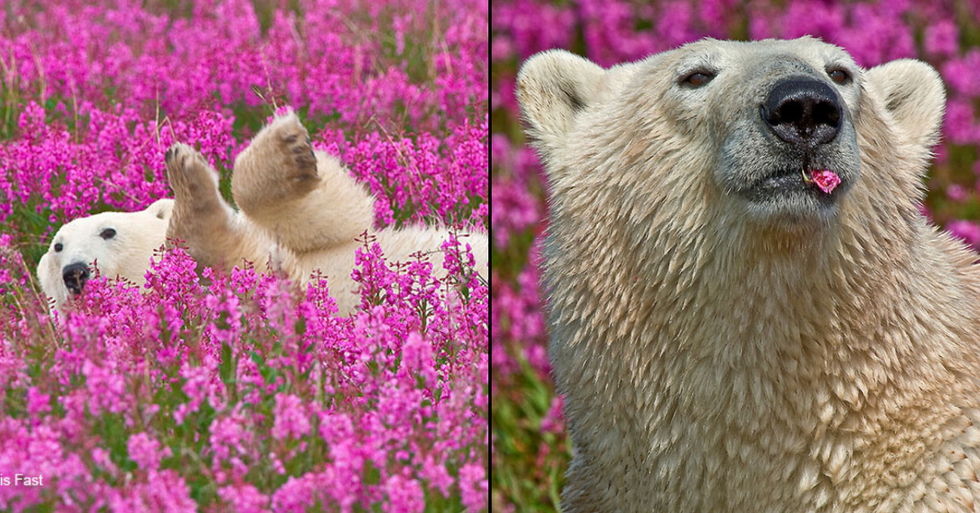 Wildlife photography is truly a beautiful thing and it helps capture some of the most amazing creations of Mother Nature.

One wildlife photographer has captured some special moments of polar bears playing in some gorgeous flower fields, so make sure to keep scrolling to check them out...

Believe it or not, polar bears aren't always in the snow...

Polar bears are native to places such as Norway, Greenland, Russia, the United States...

And, of course, Canada!

We all know the extreme weather conditions that Canada brings...

And when it's not covered in thick snow, it's blooming with beautiful greenery and flowers.

He was recently in Northern Canada’s Hudson Bay, near the lodges run by Churchill Wild in Manitoba, and some polar bears decided to drop by for a visit.

Dennis has always had a fascination with polar bears...

Speaking to My Modern Met, he said, "They have a slow, ambling gait as they drift about looking for anything that moves. It looks like they don’t have a care in the world, and that there is nothing they are afraid of. It’s not arrogance, exactly, but a quiet confidence that we often respect in humans and that translates well to the polar bear."

The contrast of the fireweed against the bear's fur is stunning.

But this isn't an unusual sight for Canadian locals. "Most people are familiar with shots of polar bears in the ice and snow of Hudson Bay in Northern Canada and in other polar regions," Dennis explained.

But we must say, it looks slightly unusual to see a polar bear frolicking in flowers...

“They are so ingrained in people’s minds that you might think the North experiences only winter," he went on to say.

Dennis has seen this joyous occasion many times now...

"I laughed out loud as I watched a relaxed polar bear bare his teeth to pluck a single flower from a stem of fireweed blossoms and roll it around between his lips!"

Dennis has always had a soft spot for white animals...

“Like many people, I love white animals, whether it is Arctic foxes, snowy owls, or polar bears," he said.

But it's not just their color that makes them Dennis' favorite target...

It's also their mannerisms.

Dennis hopes his photos of these magnificent animals will inspire others...

Because it's no secret that these beautiful animals are facing a climate change crisis.

Dennis wants people to start doing their part to help the environment...

And ultimately, the wildlife.

The polar bear has faced endangerment for a few years now...

"It would be a shame to lose something as iconic as the polar bear," Dennis said.

Many of Dennis' fans have sent kind words of praise in regards to his beautiful shots...

One user wrote online, "These incredible creatures are a global treasure... let's protect them!"

"Shows these giants as a unique presence, individuals enjoying their precious playtime..."